Looks like Tuesday 22nd June 2021 might be a busy day for focal point coal units returning to service … not only is Callide B2 now scheduled to return to service then, but so is Yallourn unit 3.

On Wednesday 16th June we noted how Yallourn unit 3 slipped back offline as the mine flood risk situation turned out more complex than had been first thought … due to  to ‘further instability in the Morwell River Diversion wall’.

Flipping the ‘MT PASA DUID Availability’ widget in ez2view to now look at the 4 x Yallourn units we see that:

1)  Yallourn unit 3 is currently scheduled (most recent data from 12:00 today) to return to service for Tuesday 22nd June 2021; whilst 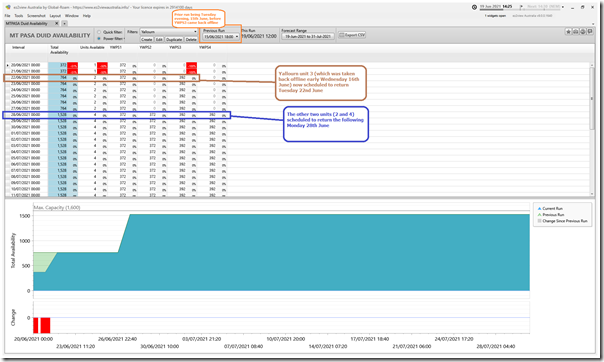