It’s a busy work-week coming up for the first in 2021 … not the least because we’re cranking the handle on the number crunching machine called ‘BEAST’ in order to produce the new Generator Statistical Digest 2020  (envisaged release date Wed 27th Jan, all going well, so a couple weeks still left to get your pre-order for GSD2020 in to save on the final price).

That busy week will lead into a busy month as people drift back into work and electricity demand cranks up (it was quite low this past Christmas Day in VIC).  We have other milestones we’d like to achieve this month … including the release of the upgrade to ez2view version 8.

Many readers will recall the problem experienced with Liddell unit 3 on Thursday 17th December and that, partly as a result of the discussions about coal units more broadly amongst the energy sector commentariat, I wondered about ‘What’s up with the fleet of 16 x coal-fired units in NSW?’.

Partly to update my understanding of what’s projected to be available through the rest of summer, but also partly an excuse to check out ez2view v8.0.0.1298 (another incremental advance leading towards release) I open up the software to take a quick look in the new ‘MT PASA DUID Availability’ Widget and filter for coal units in each region:

There are 16 x coal units remaining in NSW at this point.

As can be seen here, the latest forecast (i.e. based on current outage plans submitted by the Coal Generators to the AEMO and now visible in the MMS through widgets like these following the ERM Rule Change from Aug 2020) is that most days through the quarter will see 15 units available: 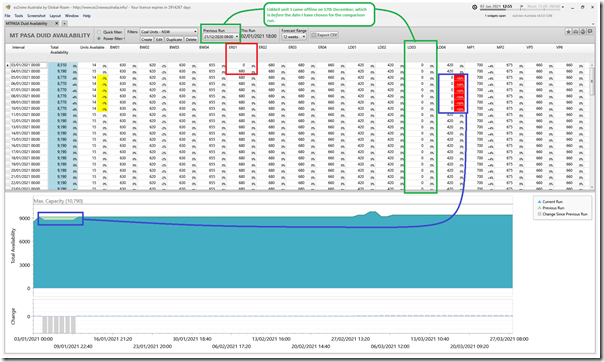 The widget shows the most recent forecast run (which, being Sunday, is 18:00 yesterday Saturday 2nd January) and allows the user to select a ‘Previous Run’ to compare to.  Given my article was published on Monday 21st December

1)  The current schedule is that Liddell unit 3 will be out until 3rd March …  at which point there would be 16 units available until an outage starts at stablemate Bayswater unit 2 (on 5th March).  Presumably if Liddell unit 3 was late and the demand was high, AGL might delay the Bayswater outage.

2)  There’s also a 6 day outage slated for Liddell unit 3 for the coming week (5th to 10th January inclusive).  This has been a recent development not in the schedule back on 21st December – hence it is highlighted in both the table and the two charts.

3)  Also worth noting is that this schedule shows the expectation that Eraring unit 1 will be back online tomorrow (Monday 4th January).  The unit was operational up until when I wrote this article on 21st December, but then came down for a short outage on 30th December and actually came back online yesterday afternoon (i.e. PASA Availability not yet updated in the bid at the 18:00 Sat 2nd Jan snapshot shown above).

Heading south into Victoria, where there have been only 10 x coal units remaining since the closure of the 8 x Hazelwood (smaller) units at the end of March 2017: 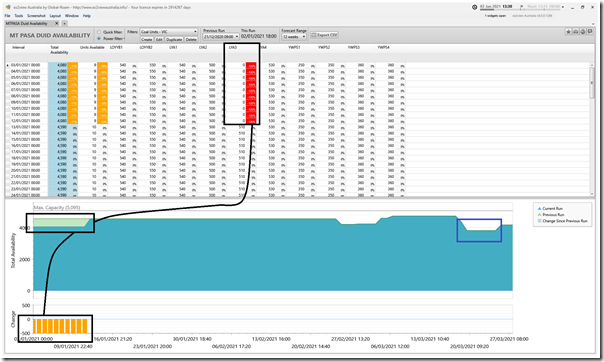 As shown in this snapshot of the new ‘MT PASA DUID Availability’ Widget, filtered just for VIC coal units,  the number of units available through Q1 mostly alternates between 9 and 10:

1)   Though the late March forecast to drop to 8 units with simultaneous outages at Loy Yang A4 and and Yallourn 1 over a 6-day overlap.

2)  As a recent development (i.e. sometime after the 09:00 forecast on Monday 21st December I’ve chosen to compare with), we see that the current expectation is that Loy Yang A3 unit is offline until Wednesday 13th January.  Turns out that unit came offline in the 21:10 dispatch interval on Tuesday 22nd December with ‘Plant Failure’ noted in the rebid reason at the time as we can see in this Time-Travelled ‘Unit Dashboard’ window: 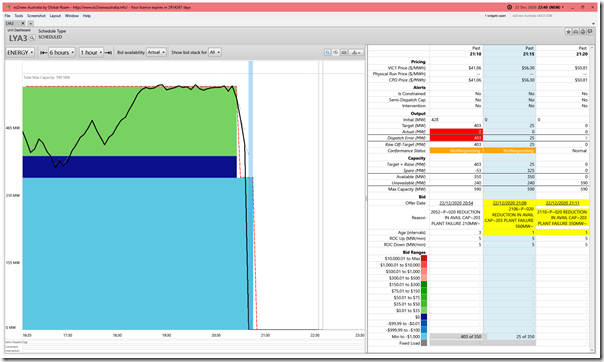 Back up north, there are 22 coal units operational in QLD. 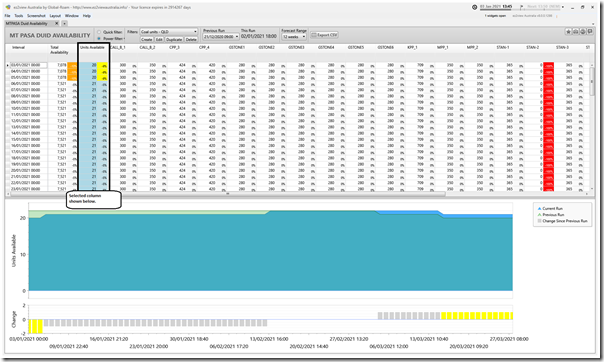 In the snapshot of the new ‘MT PASA DUID Availability’ Widget, filtered just for QLD coal units, in this instance I have chosen to chart the number of units forecast to be available:

1)  We can clearly see it’s forecast to be a low of 20 units for the next couple days (until Tarong North is back online).

(a)  Stanwell unit 2 is offline until that point.

(b)  We also see that the STAN-2 outage was not forecast in the comparison forecast (from 09:00 on Monday 21st December):

(c)  So we dig a bit and see it came offline at 20:30 on Sunday 20th December with the rebid reason referencing ‘Unit Trip’: 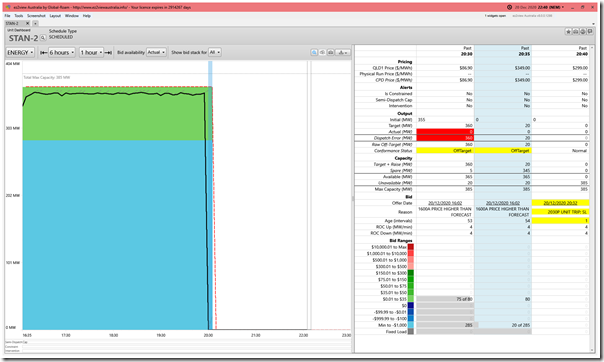 (d)  Turns out that the outage effects had not been included in the PASA Avail bid prior to 09:00 Monday 21st December (i.e. what I have chosen as the comparison run) with the unit tripped the evening before, but this was done before the next forecast update at 12:00 on Monday 21st December.

3)  Also, we see that from 5th March the number of units increases as we see GSTONE3 now forecast to be available from 5th March, whereas it had been scheduled to be on outage from that time in the comparison forecast.

4)  Millmerran unit 1 is forecast to come offline from 16th March.

This simple digging is revealing, to us, the significant value of the new data set (thanks for ERM’s sponsorship of that rule change, and head shake at the thought that there was objection to it in unexpected quarters).  We’re really looking forward to having this new widget available for our clients in the version 8 release of ez2view!

On an unrelated topic, some WattClarity readers might some appreciate these reflections on the 2020 year just passed, and what it meant for us (our 21st year of operations!).  We’re looking forward to tackling whatever 2021 has in store for us…

A few additional thoughts about proposed changes to the MT PASA process, informed by our conclusions in Theme 14 within Part 2 of our Generator Report Card.

Be the first to comment on "Status update, on availability of the 48x remaining coal units across Q1 2021"