On Friday last week I’d noted the expectation that today would be a hot one in the southern part of the NEM, which would drive NEM-wide demand past 32,500MW.

This would still have been considerably below the ‘all time maximum’ but would have been quite notable given the way demand profiles have changed since the all-time maximum was set due to rooftop PV and other factors.

Notable days in history were:

1)  On Thursday 29th January 2009 the NEM-wide demand (Scheduled Demand) reached a massive 35,478MW in a record that has not actually been eclipsed since.

2)  Last year, however, I invested some time to reverse engineer what a similar measure of Underlying Demand would have been on 31st January 2021 and concluded that it would have been higher:

(b)  I subsequently noted on 16th April 2020 that the level of Underlying Demand  was probably highest ever.

Yesterday (Sunday 24th January) was a handful in South Australia as a result of the heat, and resultant bushfires.

Even at that time the forecast for demand in Victoria was that it would not be quite that high.  The AEMO prepared for today by issuing a note this morning under Energy 101 about ‘Heat events and electricity reserve levels’.

However demand ended up being enormously different than forecast, with a cool change arriving sooner than had been forecast beforehand.  Here’s a quick synopsis… (all times are ‘NEM Time’):

(A)  Forecasts before today

Let’s start with this snapshot I’d taken from NEMwatch v10 yesterday evening, when I’d finished watching what was happening in South Australia: 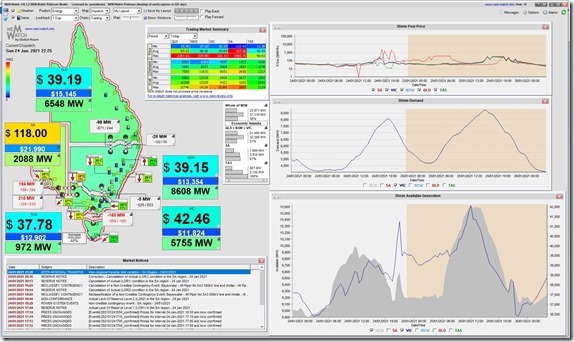 At that point the demand forecast shown (P30 predispatch of ‘TOTAL DEMAND’, a measure of Scheduled Demand) was that the Demand would push past 8,500MW towards 9,000MW … which in itself was noticeably lower than had been forecast on Friday last week.

At 09:42 I’d tweeted the following snapshot from the ‘Forecast Convergence’ widget in ez2view at 09:40, showing that actual levels of ‘DEMAND and NON-SCHED GEN’ (a measure of Operational Demand) was tracking under what the AEMO had been successively forecasting: 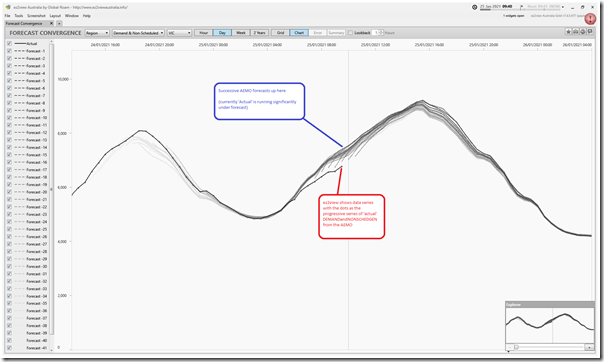 The reasons why this was the case is unknown to us, but we speculate that the following might have been factors:

Possible Factor #1 = it might have been that people pre-cooled their homes more than expected as it was quite warm overnight?

Possible Factor #2 = there was cloud cover early this morning, so perhaps it did not heat up as quickly as expected?

… and there are no doubt other factors.

At 12:38 I’d tweeted this updated view of the same graphical representation above (of ‘Forecast Convergence’ in ez2view at 12:35) that showed that demand growth had accelerated in the Victorian region: 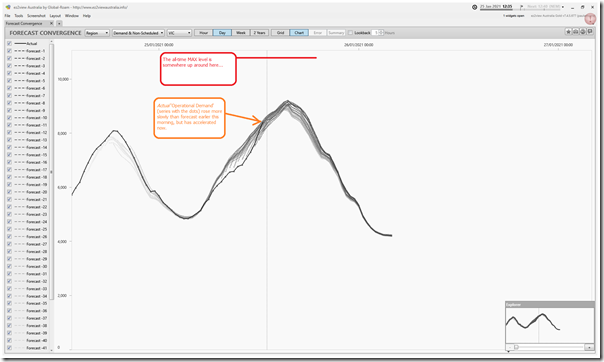 This followed from a snapshot from NEMwatch at 11:50 noting Melbourne at 39 degrees C and the dispatch price starting to move: 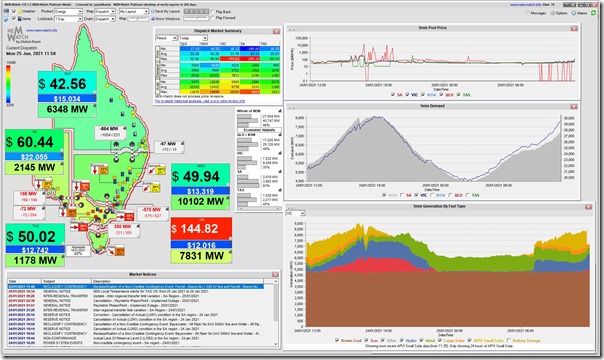 We can also see that AEMO had issued Market Notice 82359 at 10:34 with a ‘Local Temperature Alert’ for the Latrobe Valley, Melbourne, Mildura and Launceston today.

Shortly after that mark, I captured this NEMwatch snapshot from the 12:40 dispatch interval showing that the demand trajectory had levelled off, with the temperature dropped in Melbourne down to 27OC: 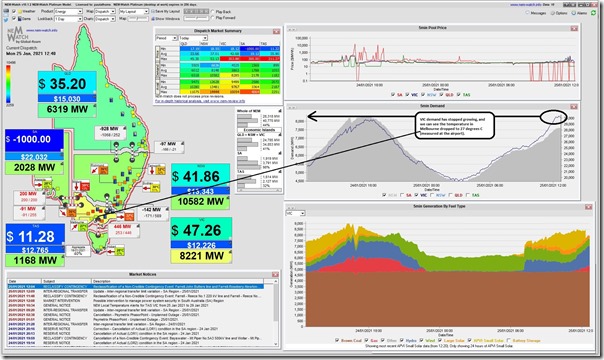 I’d noted this tweet from the BOM that provided some visual clues to how the cool change progressed : 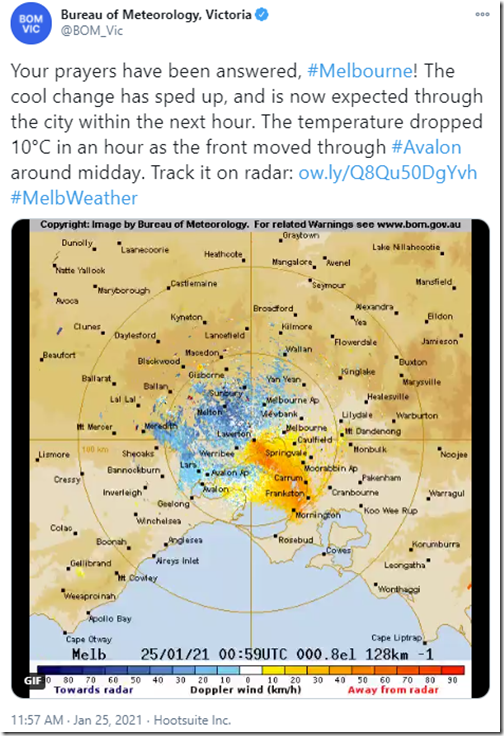 In the third snapshot tweeted from ez2view’s ‘Forecast Convergence’ widget at 13:00 I flipped to ‘HOUR’ view (to show Dispatch Interval data) and the GRID display: 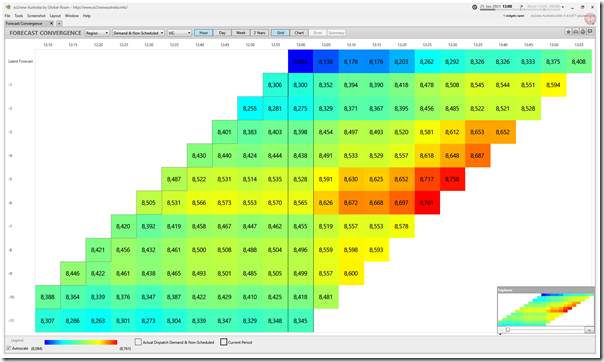 It’s clear to see, here, how the drop in temperature (and hence Operational Demand) arrived sooner than the AEMO had been forecasting in their model.

The day’s not finished yet, but it clearly looks like demand will remain suppressed and much lower than forecast – here’s the 15:20 dispatch interval showing Melbourne temperature much lower at only 23 degrees (and humidity now up to 64%) … as a result of which Scheduled Demand is down to 7,225MW: 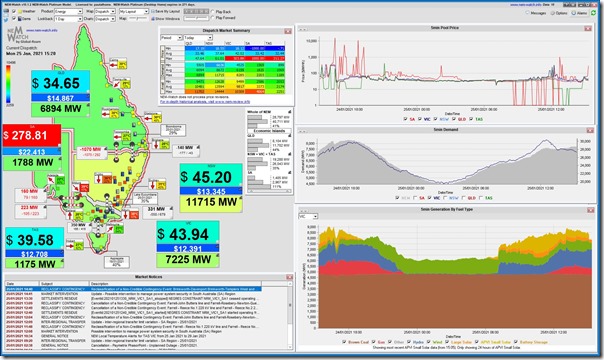 Rounding out this article, here is the 4th snapshot from ‘Forecast Convergence’ in ez2view, back to CHART view and out to WEEK (to incorporate ST PASA forecasts): 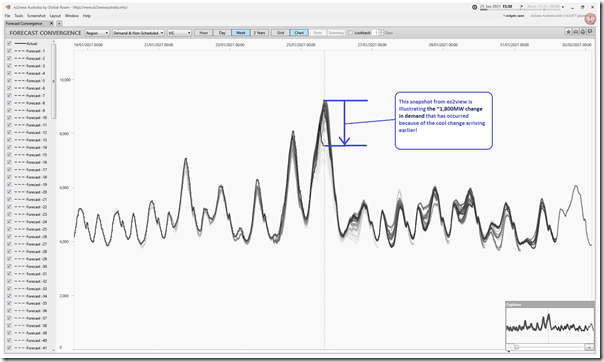 We see that the Operational Demand is now ~1,800MW lower than some prior forecasts for where it might have been at this point in time if the cool change had not come in (that’s 20% difference).  That’s a huge difference, and one that illustrates the unavoidable difficulties in ‘accurately’ forecasting such things as Demand in the National Electricity Market.

And just in case there were those who might think AEMO’s job would be easier for the rest of the afternoon, here’s the snapshot from NEMwatch for the 15:35 dispatch interval showing prices in SA continuing to climb: 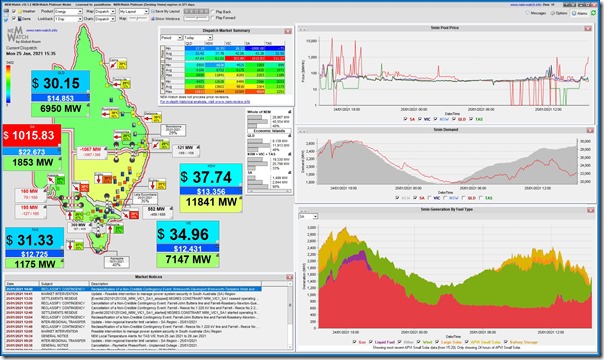 The 15:35 dispatch interval price at $1,015.83/MWh in SA with imports from VIC still constrained (at least in part because the Adelaide Hills fire is still burning), and wind production dropped under 400MW and Large Solar down close to zero in a yo-yo afternoon (cloud cover?).

Also noted that NSW demand (at 11,842MW Scheduled Demand) is pushing up into the ‘Yellow Zone’ on a sliding scale based on historical range.

Be the first to comment on "Cool change arrives in Melbourne early on Monday 25th January 2021, dampening high demand expectations"