We expect to see a few spikes like these (though maybe different causes) through summer 2020-21, so readers should note that we won’t be analysing all of these ones.  However just wanted to make a short note today for two main reasons:

(A)  Forecasts for LOR2 and LOR1 for NSW …. but for Wednesday not Tuesday

In a (rare, for 2020) face-to-face conversation with our two Melbourne-based team members yesterday (Marcelle and Linton) we commented about how there seems to be more forecast alerts for LOR2 conditions for both NSW and QLD than in prior years.

I’ve not actually crunched numbers to confirm that this is the case, so it’s just a hunch at this point.

Using the search function in the ‘Market Notices’ widget in ez2view shows a bunch of alerts that were published over Sunday and Monday looking forward to tomorrow (i.e. Wednesday 16th December).  This simple search did not show any LOR conditions forecast for today in NSW, however: 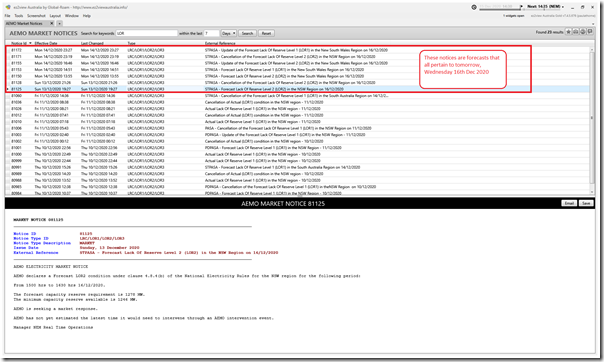 Two quick points on this:

(A1)  Much higher Capacity Reserve Requirement?

One of the reasons for this will probably be because of a Capacity Reserve Requirement that’s significantly higher than what might have been used in years gone by?

For instance, reading some of the notices above it seems that the requirements are not static numbers, and are quite large … well beyond ‘largest single unit’ that it used to be in yesteryear:

(a)  For LOR2 conditions, numbers as high as 1,477MW for forecast Capacity Reserve Requirement.  Wow!

(b)  For LOR1 conditions, numbers that don’t seem much different from that above for LOR1.  Am confused!

I’m not as close to that part of the market as I would need to be to understand specifically, but hope some learned reader here can help us out by adding a comment below to confirm the specifics of:

Q2)  When this came into effect?

Q3)  What the reasoning was behind the change?

Back on 5th October I noted about one of the risks for summer was that catch-up maintenance on the coal units (current workhorses for the NEM), which were prevented from taking the normal March-April outage season due to COVID, might spill over into peak periods given a jammed in outage season:

Not that it’s not just coal units that suffer from this … we also saw that full repairs on the Heywood interconnector (that was blown over on 31 January 2020) have been deferred until March 2021 for similar reasons, so I think that means the repaired link will be running on ‘temporary’ structures through this summer.  Let’s hope for no wind storms through the flow path!

With respect to the coal units, we’ve been watching these ones particularly closely in the new ‘MT PASA DUID Availability’ widget that it taking shape for the v8 upgrade to ez2view.  Here’s a snapshot of what we see for NSW coal units in the current data update: 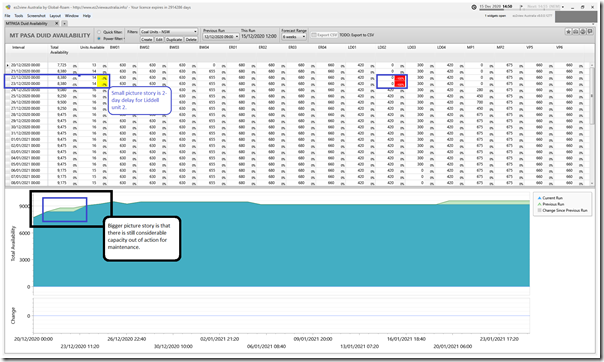 As noted on the image, the bigger picture story is that there is still >2,000MW of coal capacity in NSW unavailable due to delayed maintenance.  Let’s hope no sustained heat conditions until after Christmas … particularly heat conditions dragging into the evening when solar’s contribution is limited.

Using ez2view with Time Travel (especially because it uses end-of-interval SCADA values in versions from v7.4.5.665) we can quickly walk through what transpired … keeping in mind ‘Next Day Public’ data is not yet available, and that I have not had time for more than a cursory look … so there may well be errors remaining (thanks to those who quickly pointed out I had initially written ER02 – incorrectly) and there will be things I have missed:

Here’s a snapshot from ez2view at 12:40 – which shows the NSW dispatch price relatively low, but forecast to rise in subsequent periods anyway: 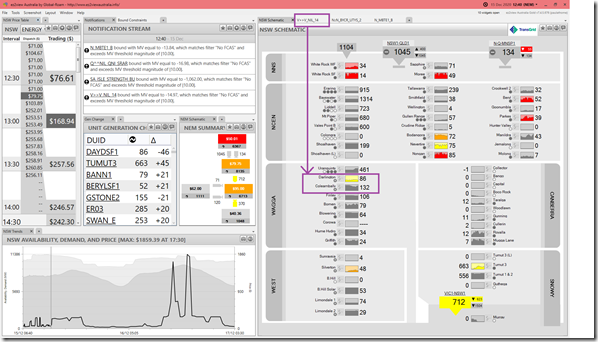 In the 12:45 dispatch interval, we see that the price had climbed to $278.90/MWh in the dispatch run published around 14:40:20 … and that (probably after the dispatch price had been published) Eraring Unit 3 had dropped in output from 285MW to 0MW in what appears to be a trip: 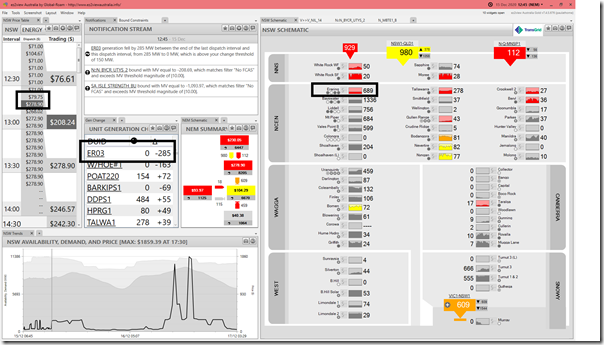 To be clear – the shift in price here precedes the unit trip. 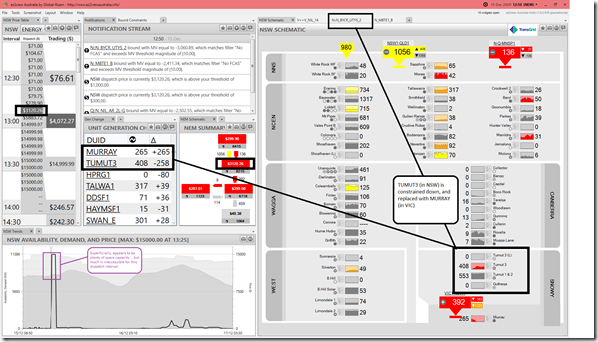 In the dispatch solution for this outcome, we see that constraint equation ‘N::N_BYCR_UTYS_2’ constrains down TUMUT3 due to stability limit on Snowy-NSW under condition of network outage on Upper Tumut -Yass(2) and Bannaby to Crookwell(61).  This is swapped out for MURRAY which makes the energy balance, but is in VIC and so will be one added factor contributing to the spike in NSW price.

In the next dispatch interval, plant have ramped up to new dispatch points and the prices subsided back to the earlier (i.e. pre-trip) elevated level: 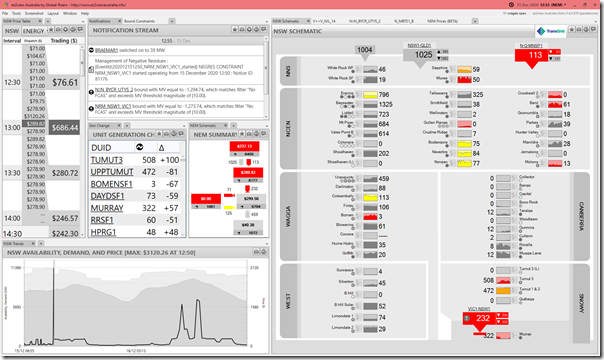 Two points I would leave you to ponder are:

1)  To what extent was what appears to be a unit trip due to the unit running at relatively low load to accommodate the moderate consumption levels and supply from solar PV (and possibly other factors as well)?

1a)  I did not note that ER03 was returning to service when it tripped (so low load not due to broader considerations).  Other units also running low load for other reasons (not solar).

1b)  More generally in terms of flexibility at minimum load across all units (not just this station), I wonder what are the implications for security of supply as this transition progresses?

2)  Whilst some will be quick to jump to the price spike being ‘caused’ by the apparent trip of Eraring unit 3 today:

2a)  It’s important to remember that a complex interconnected system like the NEM will mean rarely just one cause of any outcome;

2b)  We’re striving in successive versions of ez2view to make the various other contributing factors all more clearly visible to our clients.  Much more on this to do in 2021 and beyond … starting with the release of v8 (not too much longer).

2c)  Let us know if you know of people who can help us by working with us (internally or externally) to help us go faster, and smarter, in delivering all we want to deliver?