This afternoon we gave a briefing to the EUAA Electricity Committee that utilised some of the deeper analysis we’d performed in GenInsights21 to provide some perspectives of the current ‘2022 Energy Crisis’.

As you would expect given everything that’s going on, there were plenty of questions … so much so that we only covered a fraction of what we wanted to cover, so have been invited back to continue on Friday 15th July.

Given recent events this week, we thought we’d start that session with a quick walk through of bidding behaviour by technology/fuel type over the past week or so … and I thought it was worth sharing one particular image more broadly – that of how (in aggregate) batteries have been bidding, and the marked change seen in the past couple days.

On LinkedIn here this morning, I noted that Elizabeth Aitken had asked the following question:

‘Qn Paul McArdle, I heard that battery operators in SA & VIC were also “withholding capacity”. Is there any data that confirms that?’

On the one hand I was surprised by the question (i.e. given my thinking that ‘isn’t the answer obvious?’ ) … but one the other hand I reflected that it’s not been given much coverage, especially in contrast to the seemingly endless run of commentators who have been noting something along the lines of…

On much rarer occasions, I’ve seen others (such as Tim Nelson and Joel Gilmore did here in the Conversation and here in RenewEconomy) that…

‘The low price cap also meant there were weaker price signals as to when power stations with limited “fuel” should use it. This includes some diesel generators as well as batteries and hydro.’

With this comment, Tim and Joel show they are onto something … but still did not make the full connection to all of the plant that can have limited fuel.

So it was with interest that we walked the EUAA Electricity Committee through aggregated bid stacks for each of the technology/fuel types this afternoon … but for this audience I’d particularly like to single out this chart for Battery Discharge (aggregate across the NEM) from ez2view ‘Bids & Offers’ widget here: 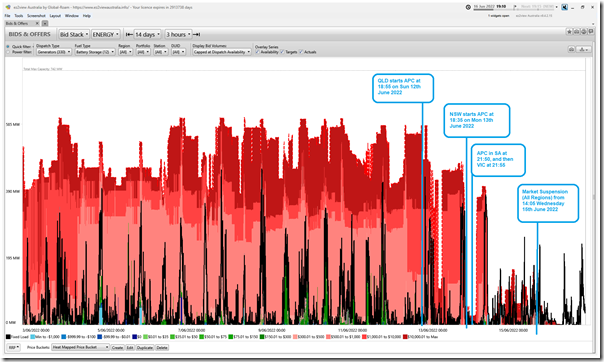 Don’t worry so much about the colours of the availability stacks … because batteries have very limited fuel, they typically will bid their volume in at very high prices in the vast majority of periods as a way of conserving precious fuel.

Also keep in mind that (from 04:00 this morning) the bid stacks are not visible as they are ‘Next Day Public’ date not published till 04:00 Friday 17th June for today.

What’s perhaps more startling to some readers is the volume of energy offered (i.e. area under the curve) that dropped substantially once Administered Pricing hit NSW at 18:35 on Monday evening followed in quick succession by SA (21:50) and VIC (21:55) … and has disappeared almost entirely with Market Suspension.

Just to be clear:

1)  No, these batteries were not ‘price gouging’ or ‘gaming the market’ or any of those other awfully simplistic/emotive terms… just as it’s quite likely many (or all?) coal and gas generators had rational/logical reasons for operating the way they did;

2)  It should be quite obvious that the response of the BESS above was a totally rational reaction to the disappearance of any price arbitrage spread with the imposition of price caps.

3)  [Added for extra clarity on Fri 17th June] Readers should keep in mind that both:

(a)  Batteries have very limited energy storage capability … which means if they are discharged for energy at their full capacity, they will run dry in only an hour or two, and so be unavailable to supply energy when the system really needs them.

(b)  In addition, batteries play a very valuable role for supply of FCAS services … and particularly Raise services (which require ‘fuel in the tank’).

(c)  Whilst most people might see the capped prices that are ensuring under Market Suspension, it’s important to recognise that the ‘Physical Run’ prices NEMDE uses to dispatch plant are still up at the Market Price Cap (uncapped, they are much higher still!).

i.  See this illustration of the ‘NEM Prices’ widget in ez2view to understand.

ii.  This means that, if a battery were to bid itself available for any period in the market, NEMDE would take all if could give and run it dry without any consideration of whether that energy would be better saved for later.

iii.  That’s a design feature of NEMDE (i.e. it does not look more than five minutes ahead) so DUID operators (batteries and others) have always managed their limited availability of energy by sculpting their availability (and prices) to make the energy available at the times it is needed … except that ‘bidding high’ is not enough given current prices, as they would still run dry.

(c)  it’s my understanding that it’s large similar logic being used for others with scarce energy resources:

iii.  Coal-fired generators, where coal stockpiles are limited (e.g. are much lower than ‘normal’ levels because of various factors – early cold weather, La Nina, Ukraine, other units out, etc)

As others have noted elsewhere (such as by Sarah McNamara in this ‘post-blame explainer of the current energy crisis’), the crisis we find ourselves in at the moment is moreso of an energy crisis, not a capacity crisis.

There’s enough installed capacity (i.e. GW) able to be available … but different technologies have each experienced energy (i.e. GWh) issues which has constrained what they have been able to bid, because that’s the process NEMDE uses:

1)  The chart above for batteries being illustrative of this – and also probably much easier for the wider energy sector to visualise (i.e. a battery being near empty).

2)  Similar issues have also been confronting hydro (which would seem to be the reason why Wivenhoe did this and this),

3)  Similar issues have also been confronting gas (and seem to be the reason why BRAEMAR7 did this) and;

4)  Even a number of coal units have been facing their own energy issues (because of La Nina and other factors).

… which reminds me of why we wrote Key Observation #5  about ‘The rise of Just in Time’ in GenInsights21 … and have decided to share this in full in this article here on WattClarity®.

For those who are unaware, until COB next Friday 24th June 2022 we’re offering both GenInsights21 (and the related GSD2021)  in this bundled offer for our End-of-Financial-Year.

It’s often said that one should never ‘waste a crisis’ … so whilst:

1)   we’re all striving hard to resolve the current issues in the immediate term,

2)  we should also be keeping our mind open to what the current ‘2022 Energy Crisis’ can teach us of the energy transition that’s accelerating.

That’s where GenInsights21 can come in useful – as discussed with the EUAA Electricity Committee today.

A quick additional look at activity Tue 28th Sept 2021 for Victoria Big Battery – as seen in ez2view with the benefit of ‘Next Day Public’ data.

NEM-wide IRPM down to only 13%

It’s 17:30 and the white knuckle ride through this evening begins…

Potential Tripwire #3 When is a load not a load?

A feature of the upcoming EMMS technical specification that distinguishes demand response units from scheduled loads could impact some users of NEM data, if left unmanaged.