Early Friday evening I posted this article following the the first half hour of a run of QLD Spot Price volatility what stretched longer than 4 hours before it finally abated just prior to midnight.

A little later I returned to add a brief PS after AEMO (at 18:21) issued an ‘Actual LOR2’ warning for the QLD region for Friday evening … and then noted this here on LinkedIn.   In response to that update, Ron Logan highlighted a 500MW drop in AvailGen that occurred for the 17:55 dispatch interval:

AEMO then issued a direction for reliability at 1850 which was cancelled at 1900.

Suspect there will be a number of people wanting to look at the rebid info when it’s available.

Absent this event QLD was looking pricey but without a declared reliability issue.’

I copied in Ron’s comments in my second article yesterday evening, noting that I’d be interested to have more of a look with ‘Next Day Public’ data in ez2view.

So that leads us to this article…

(A)  Some context about dispatch interval timing

Before we get into some analysis, it’s worth providing some context to timing and mechanics of the dispatch intervals …

2)  With the 17:50 dispatch interval comes many different data sets, including these important ones:

(a)  The 17:50 dispatch price is typically produced by AEMO 20 seconds into the dispatch interval, and available to participants shortly after that time.

i.  Public data, including price forecasts for the next 11 dispatch intervals; and

… note that this Private Data is notionally to be ‘Next Day Public’, but the AEMO has some delays in this process that means this does not happen for this set

… so I am flagging this now because it limits our ability to fully review what happened yesterday evening (at this point).

3)  There is a small window prior to the start of the next dispatch interval in which Participants are expected to complete the following:

(a)  receive and process this new data

(b)  review and understand what it’s telling participants

(d)  gain approval internally for this course of action subject to their own risk procedures; and

(e)  if a rebid is part of this process, complete the mechanical process for submitting the rebid prior to ‘Gate Closure’, including storing relevant documentation to support the rebid reason (should the AER ever request it) in a rebid log.

5)  This elapsed time between receipt of the data and Gate Closure for rebid is only 3-4 minutes long, and there is considerable complexity and risk involved:

(a)  is driving us to continue investing more $Millions in the ongoing development of our ez2view software, in order to help clients make sense of all this information in the shortest possible time.

(b)  and it’s also leading an increasing number of participants to follow ‘the rise of the auto-bidder’ … which is something that was:

i.  explored in considerable detail in Appendix 22 within our popular GenInsights21* report; and

ii.   was discussed by Jon Dyson at the CEC Wind Forum, and subsequently here in ‘The rise of the machines’ … and also by me at the CEC Large Solar Forum.

5)  This is one of the cycles that recurs for each market participant in various ways … 288 times each and every day.

With all of this in mind, let’s step back to two particular dispatch intervals yesterday evening…

Using ‘Time Travel’ in ez2view we can wind the clock back to Friday’s 17:50 dispatch interval to have a look at how the market appeared at the time.

Readers should recall that:

1)  This data happens before the rebids that led to the ~500MW drop in Available Generation;

2)  But it’s highly likely it contains the data that is central to the reason for the rebid(s) … noting we don’t yet know which plant were rebid, by whom, why or how many units.

Here’s a snapshot from ez2view at 17:50 containing a collage of three different widgets – the ‘QLD Schematic’ widget and two different representations of ‘Forecast Convergence’ widget: 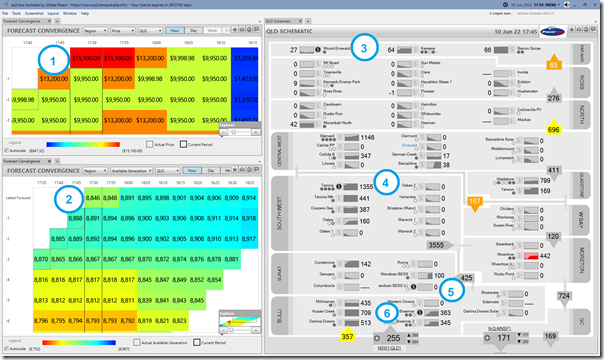 With reference to the annotations on this image:

** this forecast is informed by all supply-side bids in QLD processed in NEMDE at that point.

3)  The ‘$’ symbol on Mt Emerald Wind Farm indicates that there’s some change in bid for the 17:50 dispatch interval… we’ll look later

4)  The ‘$’ symbol on Tarong Power Station indicates that there’s some change in bid for the 17:50 dispatch interval… we’ll look at this below.

5)  The ‘$’ symbol on Wandoan BESS (Load Side) indicates that there’s some change in bid for the 17:50 dispatch interval… no time to look now

6)  The ‘$’ symbol on Braemar A Power Station indicates that there’s some change in bid for the 17:50 dispatch interval… we’ll look at this below.

So let’s have more of a look at some of these bid changes:

Using the ‘Bids & Offers’ widget in ez2view we can quickly compare two bids for the Tarong Unit 3 (i.e. the one that rebid):

As we can see, a 40MW reduction in capacity effective for 17:50 and 17:55 because of plant technical issues.

Using the ‘Bids & Offers’ widget in ez2view we can quickly compare two bids for the BRAEMAR3 unit (i.e. one of the units that’s running, and rebid): 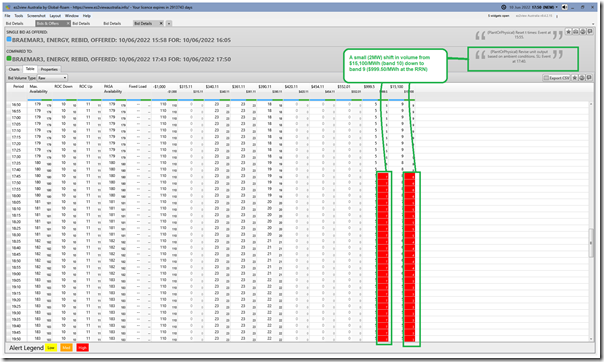 Here’s the same for BRAEMAR2: 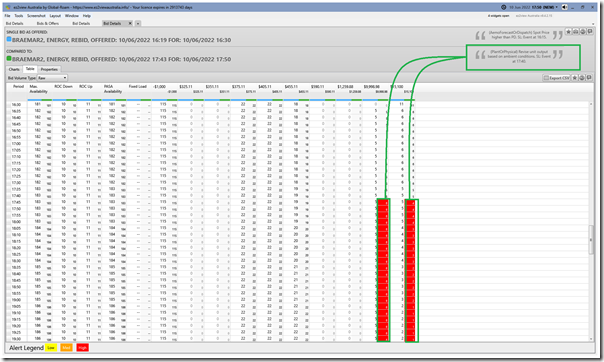 Flipping forward the same ez2view window for the 17:55 dispatch interval, we can see some of what’s changed here: 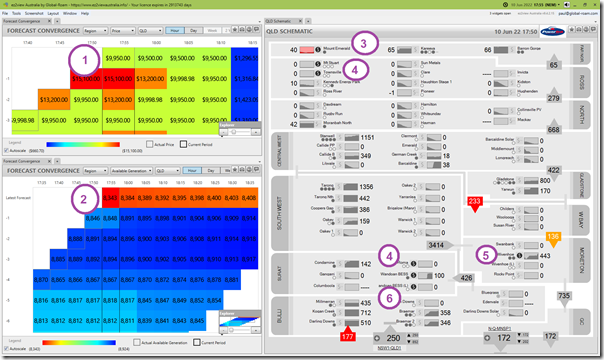 With reference to the annotations on this image:

1)  Price has landed not quite so high as was forecast ;

See Wivenhoe below for one reason

3)  The ‘$’ symbol on Mt Emerald Wind Farm indicates that there’s also some change in bid for the 17:55 dispatch interval… we’ll look at this below.

4)  The ‘$’ symbol on three peaking plant (Mt Stuart, Yabulu and Roma) indicate that there were rebids on all 3 stations for the 17:55 dispatch interval… we’ll look at this below.

5)  The ‘$’ symbol on Wivenhoe Pumped Hydro (Supply Side) indicates that there’s some change in bid for the 17:55 dispatch interval… we’ll look at this below.

6)  The ‘$’ symbol on Wandoan BESS (Supply and Consumption Side)indicates that there’s some change in bid for the 17:50 dispatch interval… no time to look now (but worth flagging that the unit’s finally arrived after this slow start).

Using the ‘Bids & Offers’ widget in ez2view we can quickly compare two bids for the MEWF1 (i.e. that shows a rebid): 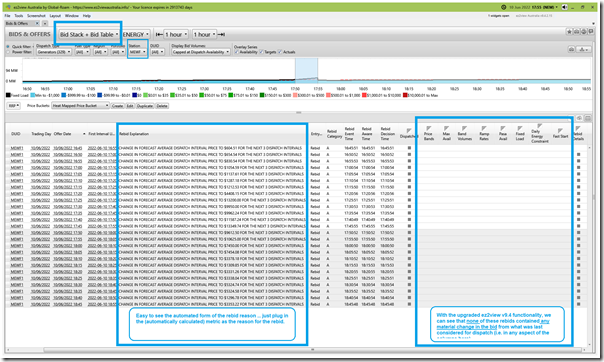 1)  there is a series of rebids occurring consistently every five minutes of every day of the year; and

2)  the form of the rebid reason is automatically generated to be as follows each time as shown:

3)  In none of the 25 rebids shown in the 2-hour window selected does anything meaningful actually change in the bid:

(a)  This emerging pattern was explored in some detail in Appendix 22 (of 28) in GenInsights21*; and

*   remember this end-of-financial year bundled offer … but only until the end of Friday 24th June 2022.

… ‘What’s the purpose of a rebid reason?’

Using the ‘Bids & Offers’ widget in ez2view we can quickly show the evolution, for the MSTUART*, YABULU and ROMA* units (i.e. collated in the widget using a Power Filter): 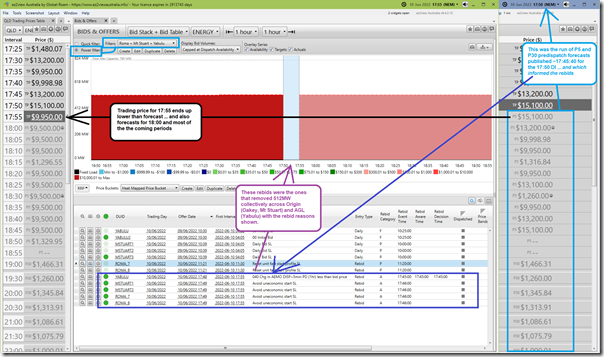 As we can see, the units all rebid for the 17:55 dispatch interval, with the net effect being the removal of 510MW capacity offered at $15,100/MWh:

1)  Origin offers the same rebid reason for all 4 units:

(b)  … which seems to imply a similar perspective (i.e. not lucrative enough to run).

At some later point, I might have time to look more into why the price outlook at 17:50 is still insufficient to support their operations … noting that:

1)  This might be based directly on the P5 forecasts published in the 17:50 dispatch interval; or

Using the ‘Bids & Offers’ widget in ez2view we can quickly show the evolution for the Wivenhoe units: 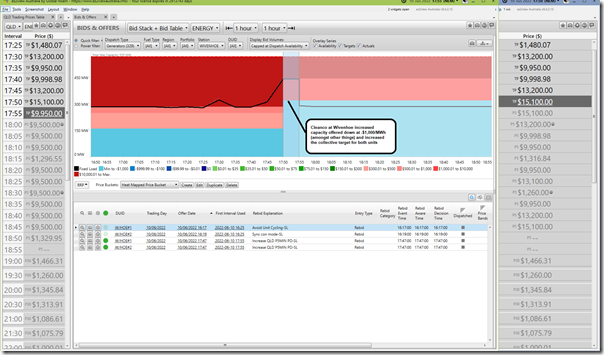 As we can see the units shifted a significant volume down to –$1,000/MWh at the RRN (amongst other changes), which will have been one reason why the price dropped from the previous forecast of $15,100/MWh for the 17:55 dispatch interval.

That’s all I have time for this evening in posting this article, but there are clearly more layers of the onion we could peel in exploring a number of aspects in the above…