Worth a follow-on from this earlier article this evening to note that the pricing volatility in the QLD region continued for a much longer period than normal, as shown in this tabulated record of price outcomes in NEMwatch here to the 21:10 dispatch interval: 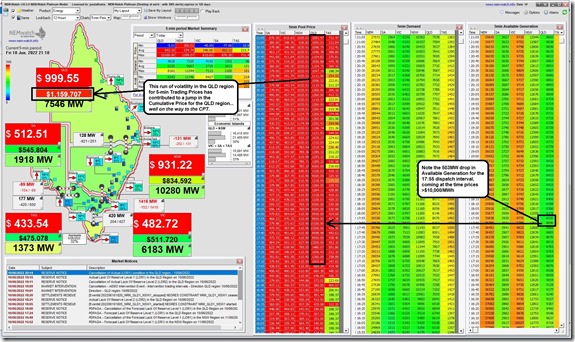 1)  Prices had been above $1,000/MWh in the QLD region consistently for four hours straight;

2)  This volatility has contributed to the Cumulative Price (CP) in the Queensland region reaching well over $1,100,000

3)  Also noteworthy is that NSW chimed in with its own run for part of the period, and that the CP in NSW also reaching up towards $1,000,000 as well.

Let’s look at this, first, and then at the other note.

I thought it might be useful to highlight how the Cumulative Price has trended over the past 14 days … keeping in mind that each 5 minute advance sees another price added to (and the oldest price deleted from) the rolling total, so the trend can rise (and fall): 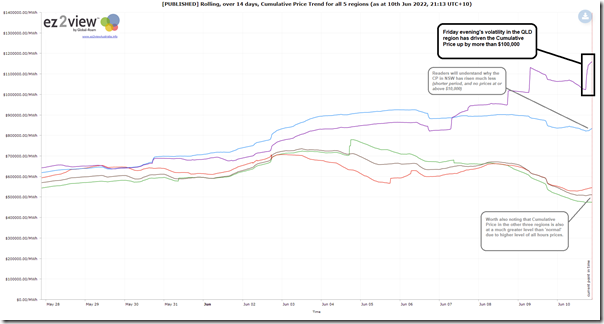 Readers here are able to track how this Cumulative Price is trending (for ENERGY) across all 5 regions in the live updating chart we’ve added into our Dashboards* application here, driven by the ez2view Trends Engine.

* readers should be able to just create an account there, by following the prompts, to access and watch this unfold.

(B)  What happens if the Cumulative Price reaches the CPT?

The Cumulative Price (CP) and Cumulative Price Threshold (CPT) are a combined mechanism that is designed to provide some protection to participants in the wholesale market in relation to prudential requirements required by the AEMO as part of their participation.   As noted on this Glossary page:

1)  the CP is just the rolling sum of 7 days of Trading Prices; and

2)  the CPT was increased from will increase from $226,500 to $1,359,100. in conjunction with the introduction of Five Minute Settlement because there was a six-fold increase in the number of trading prices seen in a rolling 7-day period.

The CP and CPT apply to the energy market, and also each of the 8 x FCAS markets … but in this particular article we’ll just focus on the ENERGY market.

If the CP reaches the CPT, the AEMO steps in and caps prices at $300/MWh in that region*, for that commodity, for a period of time until the CP returns to normal levels.

*   UPDATE – worth noting that Ron Logan’s added the comment here on LinkedIn:

‘Paul McArdle yes it’s getting close. It’s been close as well before.

The CPT continues to be calculated in accordance with the uncapped prices in each region.

Amongst the questions I have seen about this, there was this thread on Twitter started by Ariel Liebman.

Back on 30th May we posted the article/question ‘What would happen if…?’ in response to some questions fielded from readers who were asking us what would happen if the CPT was reached, the Price Cap imposed but some generators continued to see their short run marginal cost well above $300/MWh (i.e. such that the cap was not high enough to keep them above water):

1)  There were a couple comments included underneath that article directly (thanks Jeremy and Ryan), and

2)  Readers might like to also read through the comments the article has since attracted on this post on LinkedIn here since that time (thanks to the many who contributed there).

3)  Finally, to follow on from this broader level of interest, included in the ‘AEMO Communications newsletter’ this evening was the following explanation:

NEM – Information on compensation for application of administered price cap

In recent days, the seven-day cumulative spot price in some NEM regions has been close to the cumulative price threshold at times. Should this threshold be exceeded in any region, AEMO automatically applies the administered price cap of $300/MWh.

Eligible Participants (see National Electricity Rules clause 3.14.6(b)) may be able to claim compensation for costs incurred in excess of spot market revenue during an administered price cap period. This compensation is intended to maintain the incentive to continue to supply energy, ancillary services and wholesale demand response.

The process for making a claim is outlined in NER 3.14.6. Eligible Participants may wish to familiarise themselves with these provisions.

Quite timely from the AEMO!

(C)  Has the CPT ever been reached in NEM history?

Note that this page on the WattClarity Glossary will continue to be updated into the future … as this current ‘2022 Energy Crisis’ unfolds, and then in the months and years ahead.

Note also that this table does not include FCAS pricing (I have a vague memory there were some instances where FCAS pricing reached the CPT individually for a Region/Commodity) but will need to fill in those details at another time.

Stay tuned on WattClarity for more…

With reference to the other note on the NEMwatch snapshot above it’s worth noting that Ron Logan flagged this in his comment on LinkedIn here earlier this evening.  He said:

AEMO then issued a direction for reliability at 1850 which was cancelled at 1900.

Suspect there will be a number of people wanting to look at the rebid info when it’s available.

Absent this event QLD was looking pricey but without a declared reliability issue.’

Thanks Ron … yes, we’ll be interested to have a look later!

There was a temperature-driven spike in demand across the NEM later in the week beginning Sunday 7th January – culminating in the summer’s first demand peak above 30,000MW (on Thursday 11th January).

On this occasion, the spot price spiked above $1000/MWh in Queensland, NSW, Snowy and Victoria,