Most readers here will understand that we’re at the tail end of the process of compiling GenInsights21 for release in the coming days:

1)  we won’t quite make the hoped-for release date of Monday 6th December 2021 – but it should not be too much later than that!

2)  I’ll communicate more about that in the coming days;

In the past 24 hours whilst compiling two of the Appendices for this mammoth report, we have come across a couple of data sets to verify what AEMO had notified us and others about in their Intermittent Generation Forum on Friday last week.

We’ll discuss in more detail within those two appendices in GenInsights21, but I thought it worth sharing these 2 x good news stories more broadly on WattClarity here!

I’d previously expressed some concerns (on 15th August 2021 and again on 16th November) about some occasional blow-out we’d seen in the creation of P5MIN predispatch files.  There’s some good news to share today – which is that, from Tuesday 23rd November 2021 it appears that AEMO has found a way to consistently shave 5-6 seconds off the file creation time, as shown here: 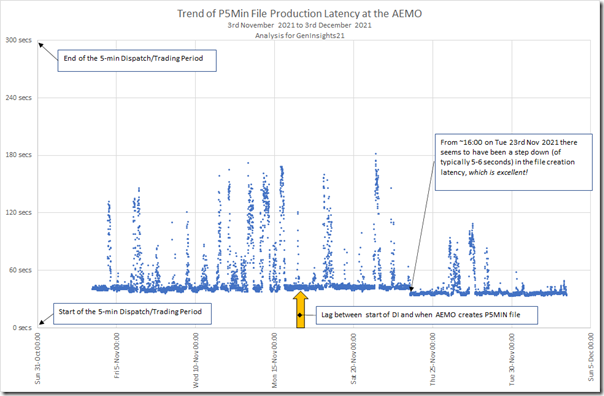 That’s great news for all involved in the market!

It’s too early to tell whether there has also been a reduction in frequency in the occasional blow-out in the file creation time … time will tell on that one!

(For those with reference to their own copy of GenInsights21, you will be able to see more in Appendix 28).

(B)  Reduced Gate Closure on Rebids

One of the main reasons why the blow-outs in file creation time has been of concern to a range of market stakeholders has been because of he very compressed timeframe allowed for ‘Gate Closure’ for Scheduled and Semi-Scheduled participants to submit their rebids within each market day.

This was discussed with respect to the collation of rebids from January 2020 to September 2021 here on 7th October 2021.

You’ll see, with reference to some more recent data (and a smaller time range, so fewer rebids) here, that the Gate Closure has moved considerably closer to the 0 second mark! 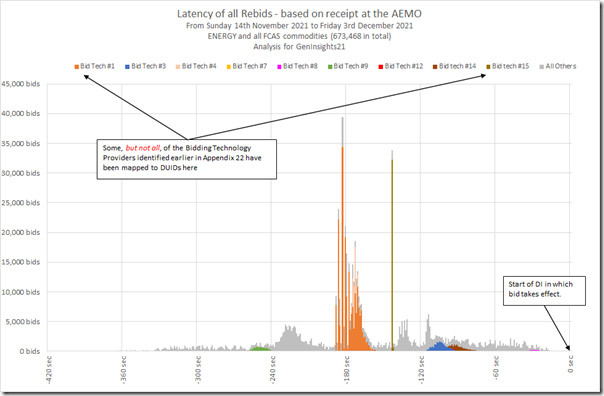 Again, great work at the AEMO!

(For those with reference to their own copy of GenInsights21, you will be able to see more in Appendix 22).

A back-dated article about the AEMO’s 2020 ISP

Can you guess these five mystery DUIDs from their longer-term MLF trend? (one sneak peak from GenInsights21)

Under four weeks to the release of GenInsights21 we thought we’d share this puzzle with our readers on Wattclarity … can you name these 5 x mystery DUIDs from their longer-term MLF trajectory?