With GenInsights21 released two weeks ago (and only yesterday all pre-orders and orders processed and invoices provided, as noted here) I’m catching up on a number of different things – actions I promised for clients, and also what’s been happening in the market.

Given that I’d not looked (since this 29th September update) at the expected return to service (RTS) of the badly damaged Callide C4 unit, I thought I’d have a quick look, via the ez2view ‘MT PASA DUID Availability’ widget: 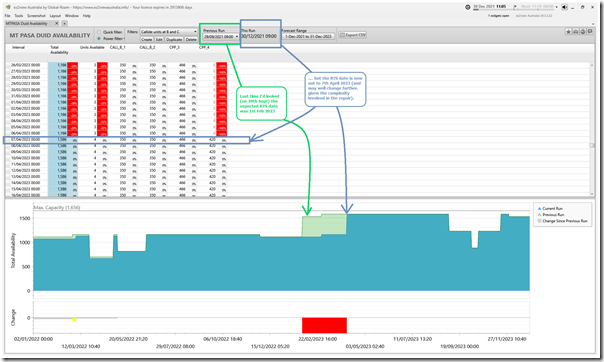 It appears that this update to the market was published on the morning of Friday 5th November 2021 (a point at which we were still very focused on completion of GenInsights21) so this update is about 8 weeks late!

One more opportunity to be thankful for ERM Power pushing AEMC for the rule change that created the opportunity for this added visibility (and widget in ez2view) … but also another time to wonder why Semi-Scheduled plant are not also covered!

I did not really expect to see any update on the CS Energy News Page around that time (it’s not the type of thing they should make a media release about every time the RTS expectation changes), but did check there, for completeness.

Both units trip at Callide C on Wednesday 13th January 2021

A pretty rare event in the NEM, when two units trip simultaneously … so a short article on WattClarity as a result.

A back-dated article, looking back at the two ERM rule change requests which, when passed by the AEMC, had great effect in expanding transparency in the NEM in relation to generator availabilities from 20th August 2020.

An updated view of the return to service schedule of Callide C3 and C4 … along with Yallourn unit 4.