Supply was stretched due to over 2GW of coal-fired capacity being unavailable. Further details, and other aspects were noted in this Summary view of supply-side contributions on WattClarity.

This article – Part A –  reviews how rooftop PV output varied and considers its influence on Queensland demand, with particular focus on the 1st and 2nd of February, 2022.

To start, let’s take a look at underlying demand in Queensland over Monday, Tuesday and Wednesday. For this analysis our estimate of underlying demand is composed of grid “demand and non-scheduled generation” and behind-the-meter rooftop PV from the APVI (interpolated to each dispatch interval).

In the figure below, we can see that demand levels on Monday the 31st were subdued relative to Tuesday and Wednesday.

Tuesday the 1st, the centre tile in the figure below, saw the highest underlying demand of the three days, reaching 11,500 MW near midday.

Wednesday the 2nd saw the highest grid demand of the three days, helped by a considerable spike in grid demand attributed to rooftop PV. 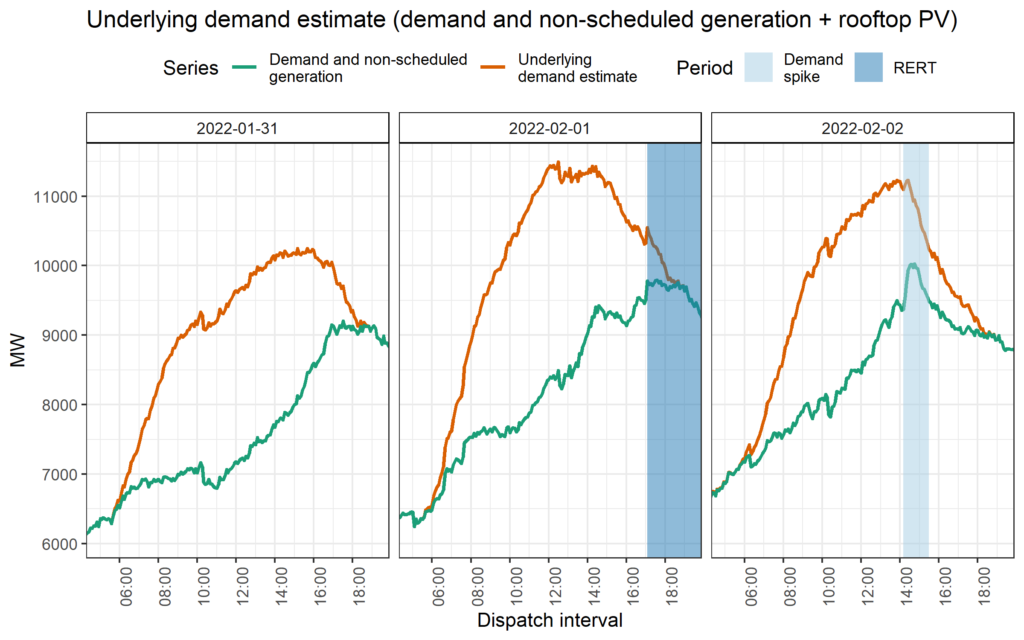 On Tuesday storms including a ‘super cell’ thunderstorm formed in the afternoon from about 2:30pm (14:30) and caused extensive damage around the south east of the state.

The storms brought down powerlines and flung vegetation into the network and coincided with a car hitting a power pole to exacerbate the extent of the outages. 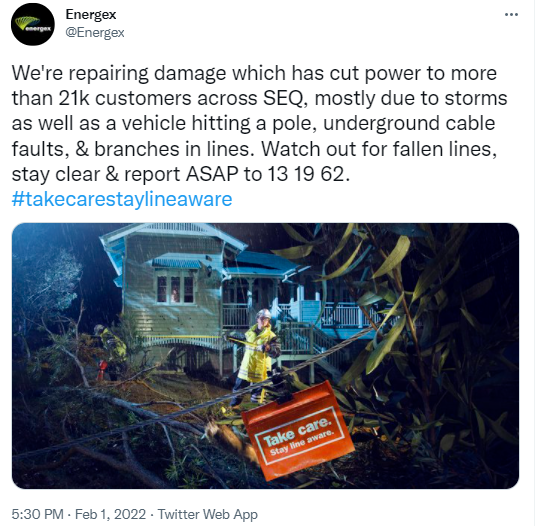 And in a 6:30 pm Facebook update Energex estimated that more than 24, 000 customers were without power.

Logan City, which was hit hard, was left with 2,104 customers without power.

Tuesday’s storms didn’t last too long at their peak intensity, from around 4pm the weather warmed again and this muted demand reductions that were anticipated with the cool weather that the storms brought.

Later in the afternoon, reserve contracts to reduce demand were activated across dispatch intervals 17:05 to 21:30. The RERT period, highlighted in blue in the chart above, captures the time when there was a steep decline in rooftop PV (the area between the orange and green lines) as the sun set.

On Wednesday the 2nd, the supply-demand outlook for the afternoon was not as tight as the day before. Nonetheless, high temperatures and high humidity driving uncomfortable outside air conditions remained in the weather forecasts.

In the morning,  10:25 am, Powerlink repeated their appeal from the day before to reduce electricity consumption between 5pm and 10pm.

Wednesday’s underlying demand reached a high point at about 14:00 (2pm), after rising less steeply than the day before.

Soon after 14:00 on Wednesday storms developed again and thick clouds led to a dramatic decline in rooftop PV output. This period, on Wednesday the 2nd, is highlighted in light blue in the chart above and evolved as follows:

In the figures below we chart three variables:

Temperatures, rooftop PV and market demand on the 1st

On Tuesday the 1st air temperatures at all three locations started to drop just after 13:30. Dalby appears to have been less affected – temperatures recovered and surpassed the earlier maximum by 15:30.

At Archerfield, a steady cooling began after 13:30 and included a change in wind direction from the west to the north east bringing cooler coastal air. At 15:00 the cooling sped up to drop the apparent temperature 10 degrees in the space of 40 minutes.  Yet the reprieve was only partial as temperatures rose again between 15:40 and 16:30 to feel like 32.5 degrees, although only to levels experienced earlier that morning.

Temperatures closer to the coast at Brisbane Airport weren’t as high as Archerfield to begin with. From a high point of 33.5 (apparent temperature) the cooling had concluded by 14:00 and didn’t see the same resurgence of the hot weather, possibly due to north easterly sea breeze winds which persisted into the evening.

Between 13:30 and 14:30 rooftop PV reduced (in association with developing cloudiness) and contributed to an increase in market demand.

On Tuesday the 1st the declining rooftop PV output almost stopped between 14:30 and 16:00, suggesting the sky was clearing in some parts of the state and this was mitigating the effect of  the setting sun. This aligned with an easing of market demand from its former peak at 14:30.

From 16:00 the rooftop PV started to decline again, in association with the setting sun and this would have helped the market demand to rise again to the highest level of the day at 16:40. This coincided with the resurgence of warm weather measured at Archerfield. 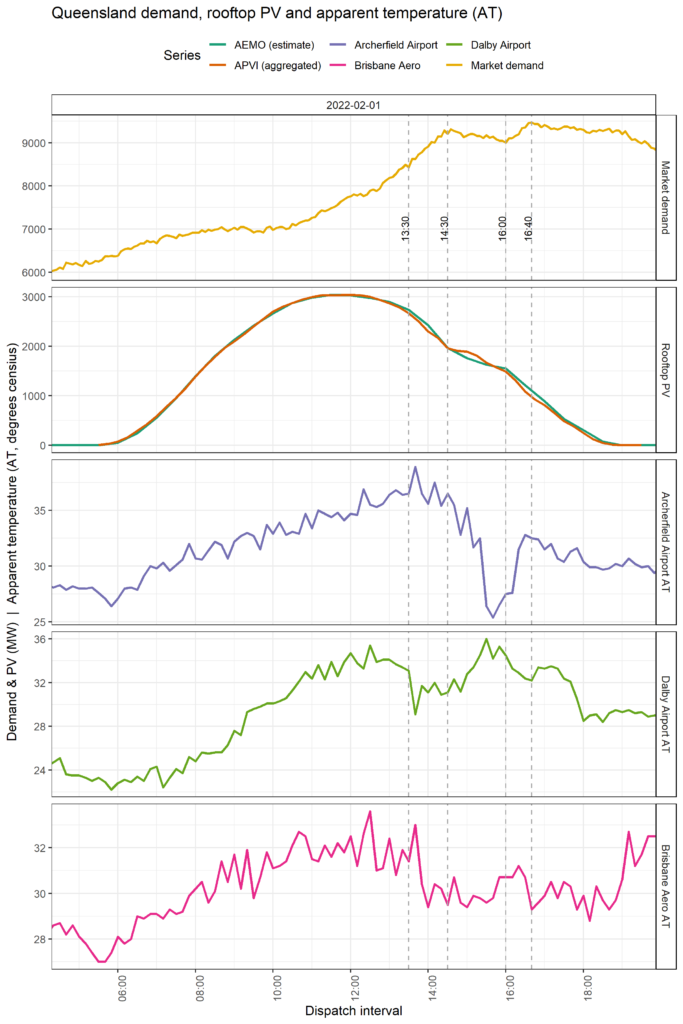 Temperatures rooftop PV and market demand on the 2nd

On Wednesday the 2nd the change in apparent temperature was most dramatic at Archerfield. Even more dramatic was the preceding spike in demand that occurred around 14:30.

The figure below charts demand , rooftop PV and temperatures, and includes a zoomed-in view of values during the demand spike.

This drop in temperature from 14:40 was roughly 20 minutes later than the drop in regional rooftop PV.

Key events, from the perspective of changes in market demand were: 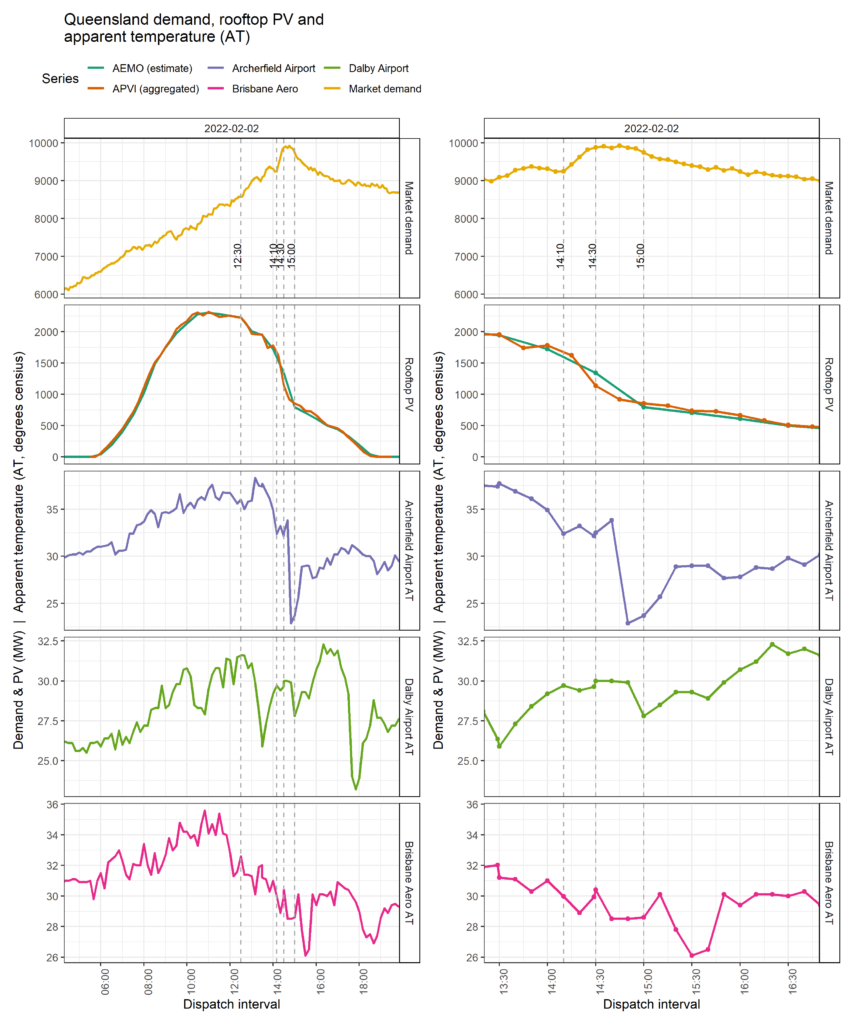 List of key of events around Wednesday 2nd’s demand spike

We’ll leave it there for now.

In the next article in this 2-part series we will delve into sub-regional differences in weather and rooftop PV, focussing on Brisbane and surroundings.