We left it off our company update for Q3 2021, but one of the other things worth noting is that we’re finding ourselves increasingly called on to help clients with the delivery of AEMO market data.

There are a number of different flavours of this service … ranging:
1)  from Hosted MMS for Registered Participants (and other stakeholders);
2)  through bundled arrangements as part of our products (such as in the deSide® service for spot-exposed energy users);
3)  down to more smaller, bespoke solutions in certain niche areas … like the smaller <5MW (but spot exposed) solar farms I have mentioned before in other articles.

At the core, it means we are investing an increasing amount of time to understand what’s going on with the data AEMO publishes (cadence, latency and so on).

As a result of this, I posted an article in August about Tripwire #4 … asking ‘Do you know what’s causing some increased latency on P5MIN data files on MarketNet in recent weeks’ – as a result of which there were some investigations being conducted inside of AEMO, I believe.

I don’t recall hearing anything further about this – and we also were busy with the transition to Five Minute Settlement (Dan’s company update did cover this!) and now we have moved onto ez2view v9.3, GenInsights21 and other things.

However we’ve fielded a number of questions recently from clients – as a result of which one of our team members ran some numbers Monday afternoon to produce the following trend, which I have tidied up a little and added annotations for the WattClarity® readership here today: 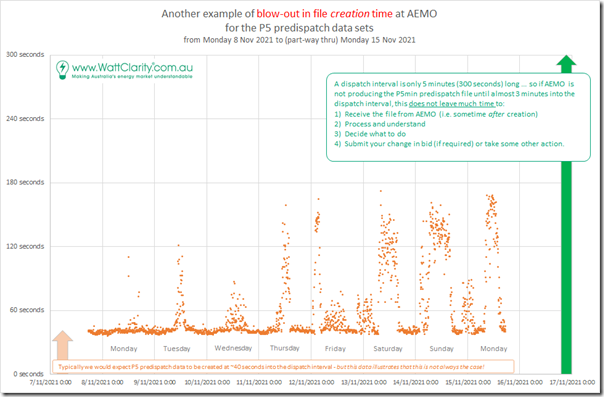 What this shows is the distribution of file creation time at the AEMO for P5 predispatch data from the start of the dispatch interval – with:

* note that the creation of Dispatch data is about 20-30 seconds faster than this.

i.  With the spike seeming to occur in the middle of the day on most occasions

(b)  and even over 3 minutes in this longer-range analysis in August.

We don’t understand what’s happening here – but would be greatly appreciative if any of our readers (if they do know) can help us understand:

2)  What (if anything) is being done to rectify?

(B)  Implication of these delays

As noted on the image, a dispatch interval is only 300 seconds long – so on the occasion where it’s taking almost 180 seconds just to create a P5 predispatch file, this does not leave a whole lot of time to do everything else required to take some action within the dispatch interval as a result.  This might include:

1)  Receiving the file from the AEMO (there’s a bit more time involved in this);

2)  Processing, and understanding what’s in it … either with a human in the loop or with an increasing amount of AI being used in automated bidders.

3)  Making some decision about what to do, and getting some approval for that (if required):

4)  If rebidding is the course of action, then being able to submit your (correctly formatted) change in bid before ‘Gate Closure’ …

(a)  especially keeping in mind that ‘Gate Closure’ on rebids into NEMDE is actually ~60 seconds before the 300 second mark as we showed here.

(C)  Reflecting back, to 5 Minute Settlement

Given these obvious challenges with operating the P5 predispatch process and delivering new data files in a timely manner, it’s quite obvious why there would have been some resistance at the AEMO to market participant requests to extend P5 predispatch look-ahead beyond the current 11 x dispatch interval useful window beyond the current dispatch interval:

1)  Requests came from several organisations (including us) as part of the planning and transition to Five Minute Settlement.

2)  Because this could not be done, market participants (the officially registered ones, and a whole lot more who are spot exposed) are left dealing with the challenges of Tripwire #1 and Tripwire #2 in terms of the P30 Predispatch process.

Many thanks for those who can help us understand more!

Last week, the AEMO submitted a rule change request to the AEMC for a redevelopment of the ST PASA process (and data sets published – to facilitate what would be a great increase in market transparency).

A back-dated article about the AEMO’s 2018 ISP

The AEMO’s 2021 ESOO was released this morning. Here’s where you can get it, and some of the articles written about it.

NEMDE under strain? Escalation in File Creation times for P5MIN

Over the past 2 weekends in February (in particular) we have noticed AEMO’s file creation time for ‘P5MIN’ files has increased significantly (and this has caused challenges for Participants). We take an updated look.