The records continue to tumble, with some SMS alerts arriving this morning to signal new lowest* points for ‘Scheduled Demand’ in the QLD region on Sunday 3rd October 2021:

* note that we’re excluding the somewhat artificial demand suppression that occurred with the load shedding on 25th May 2021 as a result of the Callide C4 Catastrophe from this logic. 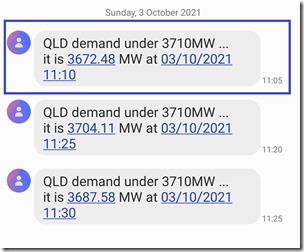 As note here, the low-point for the ‘Total Demand’ figure** published by AEMO was 3672MW as target for the 11:10 dispatch/trading interval.

**  the ‘Total Demand’ metric published by AEMO is not perfect (it’s more like a measure of ‘Market Demand’) but it is the data set with the longest range of history.

Here’s a trend of how these monthly minimum points have trended for the QLD region (displaying the three main measures of demand published by AEMO) from NEMreview v7: 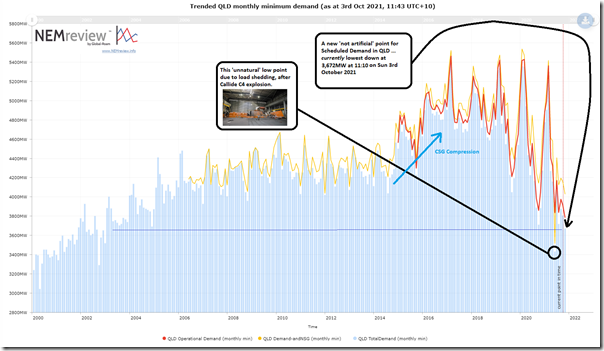 On this chart we can see the low point previously registered down at 3,889MW on 23rd August 2020 … but this dropped further in September 2020 at 3712MW (the 11:30 dispatch interval) – but it does not look like I wrote an article about it (it was certainly the reason for the SMS alert only triggering below 3710MW).

Interestingly, the AEMO’s published data for Operational Demand*** shown trended above appears to have already excluded the effect of that load shedding in May, meaning it does look like a new low point (at 3,784MW for half-hour ending 11:30) for Operational Demand … but it’s likely AEMO or Powerlink will be along in another day or two to confirm this.

*** Don’t forget to consult this prior article if you want some of the gory details about how demand is measured in the NEM.

It’s also quite easy to see the uplift in ‘many hours’ demand that occurred with the advent of upstream compression of CSG for LNG exports some years ago now … which makes the recent declines in minimum demand all the more startling!

PS AEMO did indeed confirm this new low point for Operational Demand for QLD in this tweet later on Sunday:

A quick look at the (tight) QLD+NSW supply stack, on Tuesday evening 3rd May 2022

A first after-the-fact review of the price volatility seen in QLD and NSW on Tuesday evening, 2nd May 2022. What were some of the causal factors?

A quick look at the start of price volatility on Tuesday evening, 7th June 2022