Yesterday (Sunday 3rd October) it was Queensland’s turn … and also for whole-of-NEM demand.

Today, on a labour Day public holiday in NSW, we see the SMS pings continue, announcing that Scheduled Demand has dropped under the previous ‘low point in a long time’ with target ‘Total Demand’ reaching a low of 4,617MW for the 11:15 (NEM Time) dispatch interval …

AEMO had noted their expectation that these kinds of low points might occur over this long weekend.

(A)  Long-range trend over NEM history 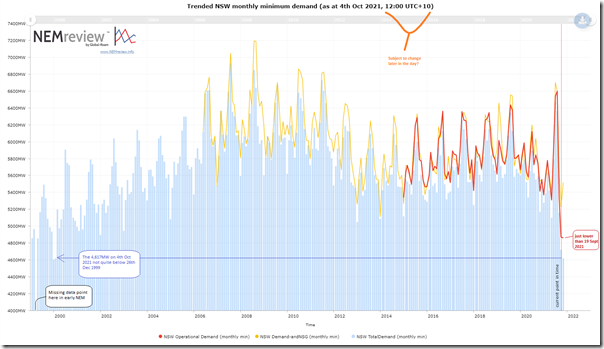 For those interested in the details, read through to some of the gory details of how these different demand measures come about.

(B)  Those different measures of demand

Two quick notes, with respect to those different measures of demand…

(B1)  Scheduled Demand not quite the ‘lowest in NEM history’ 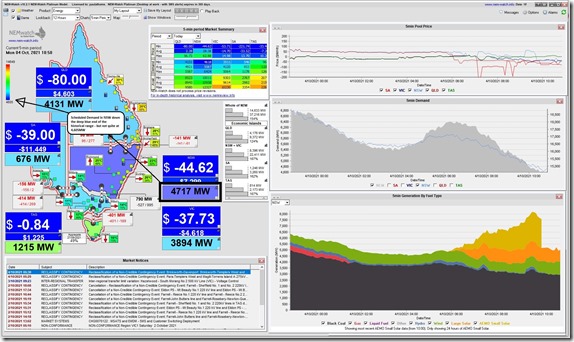 Only one of those measures in the chart above was published by AEMO (or NEMMCO, more precisely) back at the start of the NEM – and that was the ‘Total Demand’ measure (which is a proxy for what the AEMO now talks about as ‘Scheduled Demand’ …. but, ironically, is certainly not what a layperson might think of as ‘total demand’!).

1)  We’re currently continuing to use that measure in NEMwatch; and also

2)  It’s useful to see a longer range of data in order to put what is currently happening in more context.

From the chart above we see the low point today is not quite down at the ‘record low’ level of 4,605MW early in the morning on 26th December 1999.

(B2)  Operational Demand lowest on record (lower than 19th September 2021)

However it is worth noting that (with the AEMO’s newer measure of ‘Operational Demand’) it shows that the demand seen today is a little lower than the prior record on Sunday 19th September 2021, which Dan had documented in this article a couple weeks ago.

2)  I presume AEMO will provide some record of this new low point later.  They were pretty quick in confirming yesterday’s low points.

To provide a bit more context, here is a ‘zoomed in’ trend of the three measures shown here over the span of the past couple weeks … so encompassing the record on 11th Sept 2021 and then 19th Sept 2021. 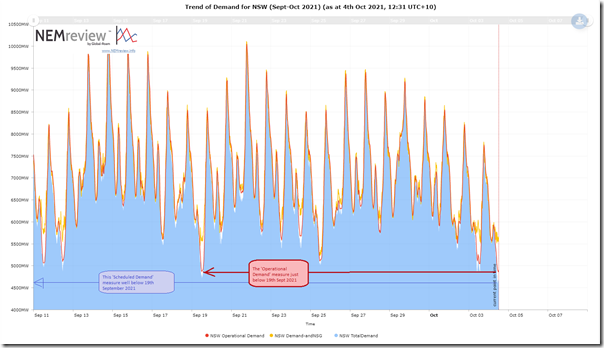 No doubt the slide will continue, moving forward, given the seemingly insatiable appetite for people to install rooftop solar PV systems.

An email alert from NEMwatch (noting Scheduled Demand under 500MW in South Australia today) distracts us, and prompts us to dig a little deeper at the longer-term trend.

Is South Australia or Victoria next to the CPT … with Administered Pricing also in NSW?

With NSW under Administered Pricing now (<24 since QLD hit that mark) we look at other regions and who might be next domino to fall.