My SMS alerts have been beeping incessantly since 11:10 (NEM time) as Scheduled Demand in the South Australian drops below the prior minimum point (which was at 184MW for the 13:20 dispatch target on 26th September 2021): 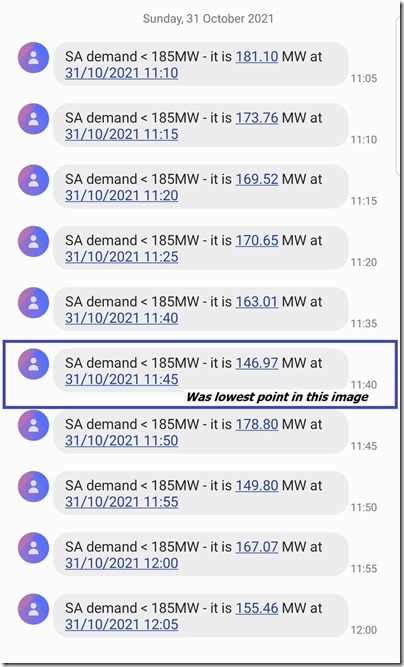 (SMS alerts can be configured through a number of our products – NEMwatch Platinum, deSide® and ez2view)

As highlighted in the image above, the record had now been shifted down at least as far as 147MW for the 11:45 dispatch interval on Sunday 31st October 2021 … but I had not much confidence the record would stay (only) that low.

Indeed, here’s a snapshot from NEMwatch v10.2 from the 12:15 dispatch interval to highlight South Australian Scheduled Demand* down at 117MW…. and likely to drop further:

* you might also hear this referred to as ‘Market Demand’.  Readers can refer to this explanation of the gory details of the different measures used for electricity demand.  AEMO typically talks about ‘Operational Demand’ … which you can think of as ‘Grid Demand’. 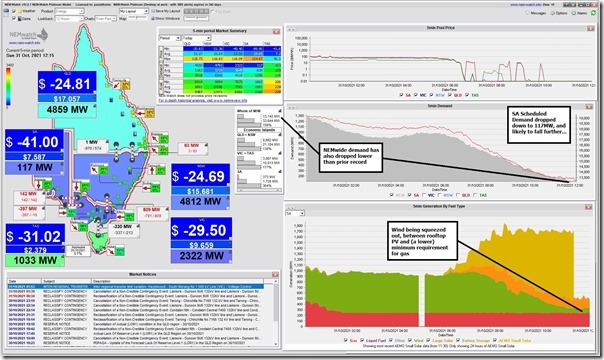 I’ve also noted here that the NEM-wide demand in the image had dropped to just above 13,000MW … so below the prior record set for Scheduled Demand (13,273MW target for 10:55 dispatch interval on Sunday 3rd October 2021) … and we can see why, when the SA, VIC and NSW regions all have a deep blue colour with their demand levels each down close to the prior records for minimum demand summarised for each region here.

I realised later (and added into these updated stats here) that I had overlooked the lower point set down at 12,536MW for NEM-wide Scheduled Demand back on Sunday 17th October 2021 … so (whilst it was a record for South Australia) it was not a record for NEM-wide demand.

Time permitting, will come back later to write some more as a follow-on article (and no doubt AEMO will be along later to confirm this, in terms of Operational Demand) …

On Monday 1st November 2021, the AEMO tweeted this confirmation of a new low-point record for Minimum Demand 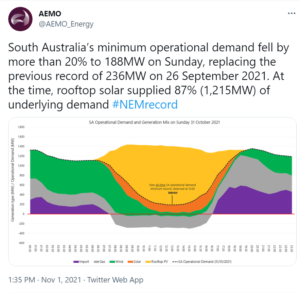 Another day, another “Actual LOR2” Notice for South Australia