As noted in the earlier ‘part 1’ article, we eclipsed the prior record for minimum demand on a NEM-wide basis earlier today.

Just like happened for the NSW region, over the 2.5 hours that followed (until 14:10) the NEM-wide demand remained underwater compared to that prior minimum point set just on 3rd October 2021 due to the insatiable growth of rooftop PV.

(A)  Lowest point for Scheduled Demand

The lowest point for the ‘Total Demand’ measure published by AEMO (representing ‘Market Demand’ or ‘Scheduled Demand‘) occurred in the 12:55 dispatch interval, and was captured in this snapshot from the NEMwatch software at the time: 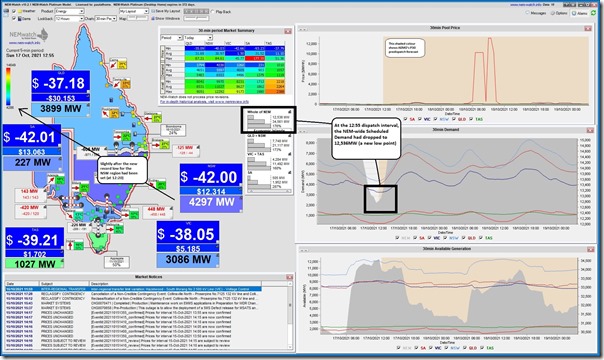 A low point for Scheduled Demand (12,536MW target for 12:20 dispatch interval) … which eclipses the prior record set on Sunday 3rd October 2021.

(B)  Lowest point for Operational Demand

In recent years, AEMO increasingly likes to refer to ‘Operational Demand’ (which you could also think of as ‘Grid Demand’ that they can easily see in real time).

Using this Trend Query in our NEMreview v7 software, here’s a look at three different measures of demand published by AEMO for the NSW region over the past few weeks, including the date of the prior low point: 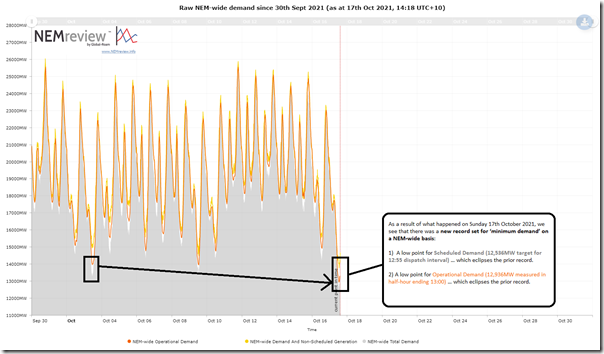 As noted above, there was a low point for Operational Demand (12,936MW measured in half-hour ending 13:00) … which eclipses the prior record.

1)  Yesterday the AEMO had been forecasting it might be ~1,500MW lower today than the prior record minimum.

2)  It did not quite reach that level, but a 1,036MW* reduction in minimum demand from a record set only 2 weeks prior is a monster leak in the wholesale market!

I assume AEMO will be along later to confirm this?

As we have the time, we’ll provide some commentary here about the methods used by the various bodies for “long term” (which in the NEM means 10-years, typically)  forecasting. Where they don’t fit elsewhere, we’ll also put articles here looking…