As noted in the earlier ‘part 1’ article, we eclipsed the prior record for minimum demand in the NSW region in the 10:45 dispatch interval.

Over the 3:40 hours that followed, the Scheduled Demand  in NSW remained submerged under that prior level through until the 14:25 dispatch interval (NEM Time) at which point demand had climbed out of the hole dug by the insatiable growth of rooftop PV.

(A)  Lowest point for Scheduled Demand

The lowest point for the ‘Total Demand’ measure published by AEMO (representing ‘Market Demand’ or ‘Scheduled Demand‘) occurred in the 12:20 dispatch interval, and was captured in this snapshot from the NEMwatch software at the time: 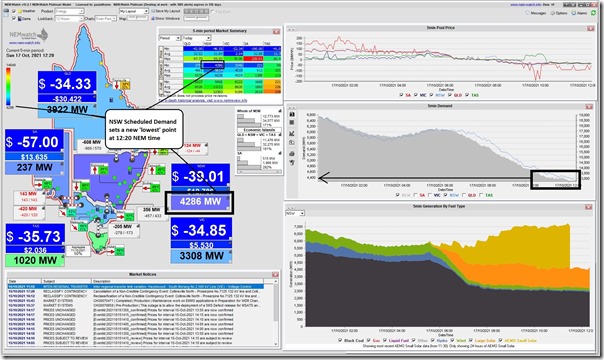 A low point for Scheduled Demand (4,286MW target for 12:20 dispatch interval) … which eclipses the prior record set on Monday 4th October 2021.

In contrast to yesterday in QLD, we see that the 5-minute trading prices are only just below $0/MWh (i.e. in the ‘negative LGC’ price range):

1)  so we can see plenty of Large Solar production in NSW to accompany the rooftop PV production as well.

2)  have not checked to see why wind generation is low … might be to do with low wind, or constraints, or perhaps because of bidding.

(B)  Lowest point for Operational Demand

In recent years, AEMO increasingly likes to refer to ‘Operational Demand’ (which you could also think of as ‘Grid Demand’ that they can easily see in real time).

Using this Trend Query in our NEMreview v7 software, here’s a look at three different measures of demand published by AEMO for the NSW region over the past few weeks, including the date of the prior low point: 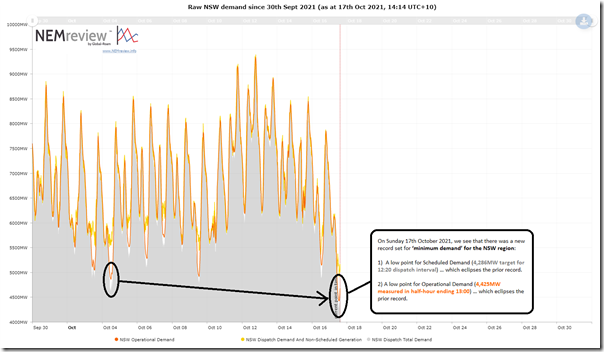 As noted above, there was a low point for Operational Demand (4,425MW measured in half-hour ending 13:00) … which eclipses the prior record.   I assume AEMO will be along later to confirm this?