Worth a short article this morning, as we may well be referencing back to this in future, to flag TransGrid’s release of what they call an ‘Energy Vision – A clean energy future for Australia’: 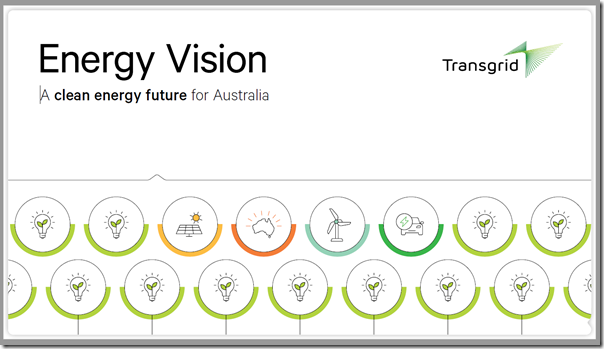 With my focus on our own upcoming GenInsights21 release (which I noted yesterday has been re-started now in Q4 for release on or around Monday 6th December 2021) I’ve not the time to delve in any detail.

However as time permits I might expand on what follows below…

(A)  Discussion by TransGrid

The key point of the presentation seems to be that TransGrid (in conjunction with their collaboration partners CSIRO, ClimateWorks and Brattle Group) have modelled six different scenarios in terms of what might unfold into the future: 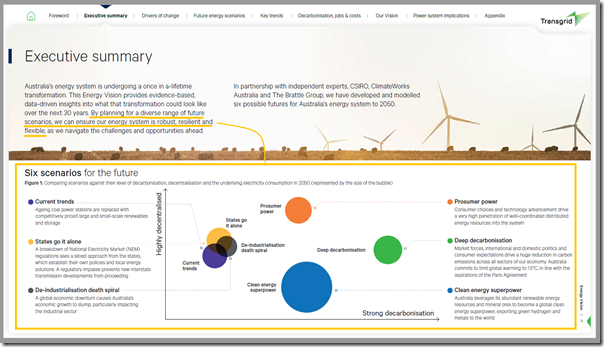 The reason they have done this seems to be summed up in this statement:

“By planning for a diverse range of future scenarios, we can ensure our energy system is robust, resilient and flexible, as we navigate the challenges and opportunities ahead.”

… with my emphasis added.

My interpretation is that TransGrid is not forecasting which scenario will unfold … with TransGrid’s need more fundamentally to understand a diverse range of possible future paths we might see the Australian electricity sector evolve down in future, because TransGrid needs to (somehow!?) be ready to serve under all of them.

Of course elsewhere we’ll no doubt see many individuals pick their own favourite scenarios (and no doubt there are people in TransGrid who also have favourites, for various reasons) – including other scenarios not modelled by TransGrid here (cue to those who support nuclear, for instance).

Some 7 gigawatts of coal will exit the national electricity market by 2030 under current trends, 2GW more than anticipated, while a drive to deep decarbonisation would see the fossil fuel disappear from the system entirely by 2032 compared with the final coal plant exit date of 2048.

“The growth of renewables is challenging the economic viability of Australia’s ageing coal generators,” TransGrid said in its Energy Vision report to be released on Wednesday. “Our analysis indicates a high likelihood of early coal withdrawal across a range of future scenarios.”

No doubt there will be other coverage I find later…