Last week I was asked here on LinkedIn what I thought would happen with price volatility once Five Minute Settlement had commenced.

My answer was that it would change.

Asking whether it would be higher or lower is a one-dimensional question to a multi-dimensional phenomenon.  Time permitting, we might explore some of the early results as an appendix in the upcoming release of GenInsights21.

Speaking of volatility, it did not take long for the first instances in the new operating environment – there was a blip at 10:15 on Friday 1st October, and today (Monday 4th October 2021) there were these three spikes in the QLD region, captured in SMS alerts from our ez2view software (note that this level of alerting is also available in deSide® and NEMwatch): 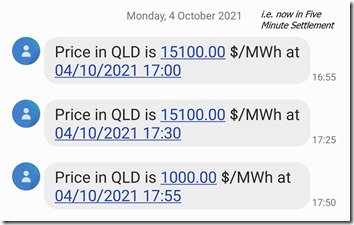 Here’s a snapshot from NEMwatch v10.2 highlighting some of what was going on at the time of the first spike to $15,100/MWh at 17:00, the current Market Price Cap: 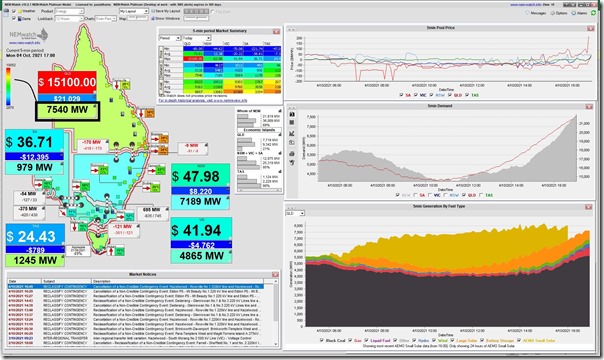 By this point in time, QLD’s aggregate contribution from solar PV, both Large and Small (noting that Medium is subject to ‘Villain #8’) was down to approximately 1,000MW … down from a peak of over 3,400MW in the middle of the day…

… also interesting to note that contributions from Large Solar had been suppressed in the middle of the day, only ramping up from the afternoon when spot prices rose above $0/MWh.  Hence peak contribution could presumably have been significantly higher.

In contrast to the very deep blue colour for NSW in the middle of the day today, we see QLD Scheduled Demand  is in climbing out of the green zone as rooftop PV declined, but Underlying Demand remained elevated.

(B)  High temperatures today – higher than the prior summer!

One reason for the colour of the QLD region was the higher temperatures experienced.   Indeed I saw it noted by Ben Domensino from Weatherzone was that temperatures today in Brisbane reached 36.6°C … which was a level higher than seen at any point in summer 2020-21 … and it’s only the start of October! 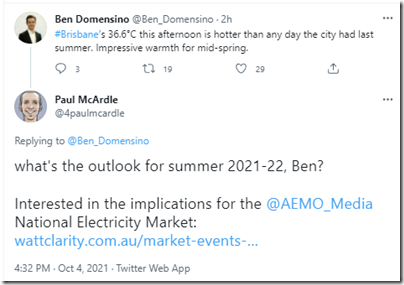 Bit of a rude shock, and obviously prompting questions, like mine, of what the forecast is for summer 2021-22…

Using Time-Travel in ez2view I’ve wound one of my windows back to 17:55 (with the QLD dispatch/trading price at $1,000/MWh) as an easy way of showing the pattern of pricing across all 5 regions over the prior 12 x 5-minute trading periods: 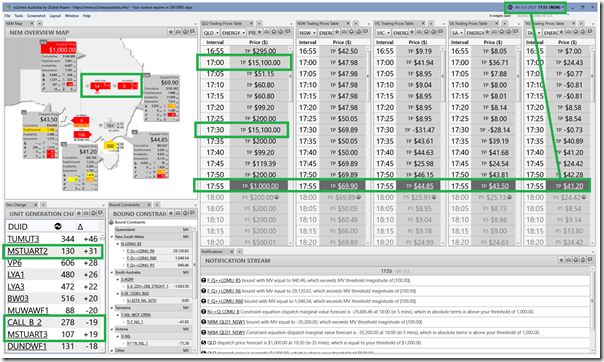 There’s a couple things highlighted in the display that I won’t expand on here … but the main point is that there’s no follow-on price drops to –$1,000/MWh as a result of the ‘race to the floor’ bidding approach that was popular, and logical, under Thirty Minute Settlement.

Utilising the ‘Forecast Convergence’ widget in ez2view to look specifically at the 17:30 dispatch/trading period, we see that there was some forewarning that a price spike might eventuate 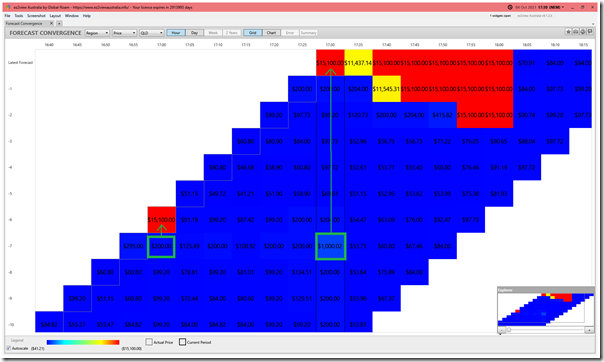 1)  The intent of predispatch is not to ‘accurately’ predict what prices actually end up being.

Now that we’re past the main transition to 5MS in our products, we’ll look forward to having time to get back to the number crunching to help our ez2view and deSide client understand ‘risk of volatility’.

Morning spot price volatility in the QLD region persists further into the morning (Tue 15th June) than has become expected.

Price volatility in South Australia on Wednesday morning, 16th December reminds of the observations made in GenInsights21

The mercury in Sydney topped the 40 degree mark today, but demand did not climb to the heights it achieved when it set the record 2 summers ago.

As Q2 2021 unfolded, it seemed that there were many instances where prices spiked during evening demand peaks – and that wind output was low at the time. So I took a closer statistical look…