A short article (that’s taken a couple hours to publish, in between other work) prompted by the evacuation orders re-issued for Traralgon in the Latrobe Valley this afternoon:

The reports we’ve seen online are not pretty pictures.

(A)  A current view of the market today

* to be clear, this is speculation on our part, at this point! 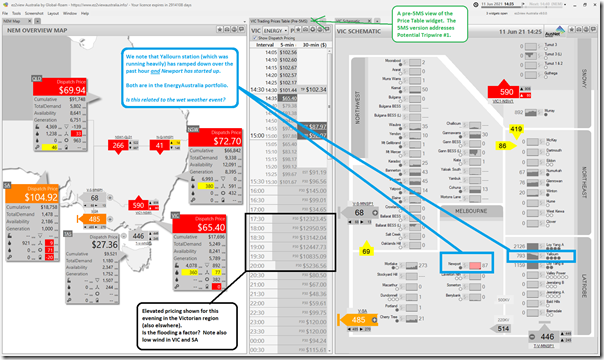 As noted on the image, we see that (both in the EnergyAustralia portfolio) Yallourn has been ramped down, whilst at the same time output from Newport (gas-fired, inside of Melbourne) has ramped up.  We wonder about the extent to which this is related to the wet weather event.

We also see that there are elevated prices currently forecast for VIC this evening… but using the Forecast Convergence widget, we see that there’s really been not much change in these forecasts for a number of hours to this point (snapshot for 16:00): 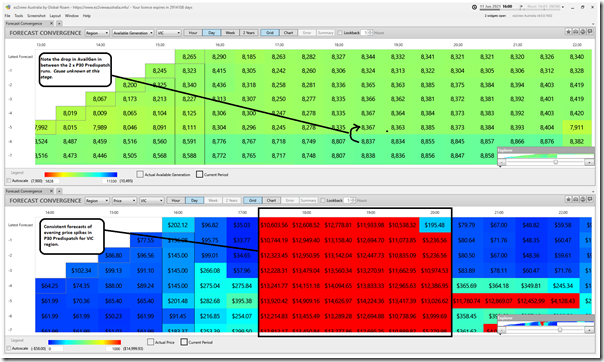 As noted before, we’ll be releasing version 9 for clients as soon as we can, to address changes coming in October for Five Minute Settlement, and also for the Wholesale Demand Response Mechanism.

In the image above, the prices table widget is now named as a ‘pre 5MS’ version … because this will change significantly for 5MS.  That work is done (incorporating consideration of Potential Tripwire number 1), but there are a number of other things we’re completing to address these changes.

… no soon as I’d noted about this article on LinkedIn this afternoon that I see Josh Stabler, from EnergyEdge, also asking the same types of questions.  You might find comments on either thread there on LinkedIn of interest…