A short third article for the day to reference this Media Release published by EnergyAustralia this afternoon: 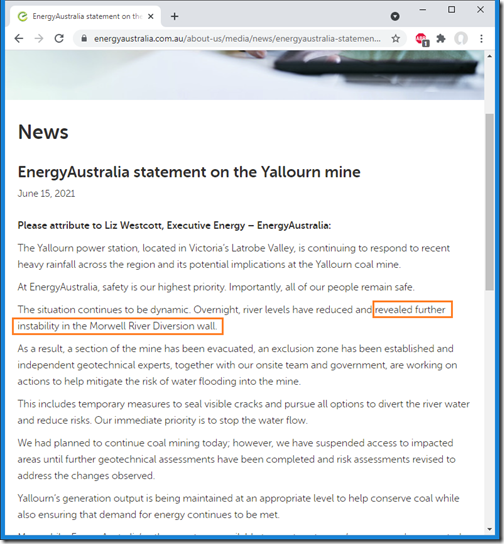 … and in particular the following sentence:

The note continues, by noting:

“We had planned to continue coal mining today; however, we have suspended access to impacted areas until further geotechnical assessments have been completed and risk assessments revised to address the changes observed.”

This media release was tweeted at 14:58 today.

(A)  Situation at Yallourn

So my sense is now a little different than when I had written this note early this morning with YWPS3 back online:

1)  Whilst YWPS1 and YWPS3 are both still online at present;

2)  The recovery of full operations is not as straightforward as I had been assuming:

(a)  More complexity; and

Having ticked over into a new week since I last used the ‘MT PASA DUID Availability’ widget in ez2view for Callide (on Friday 11th June) we’re now looking at the coming Sunday 20th June being the first day on the MT PASA time horizon.

Flipping the filter to look at the 4 x Yallourn units, we see that the expectation is YWPS2 and YWPS4 will be offline at least until Monday 21st June: 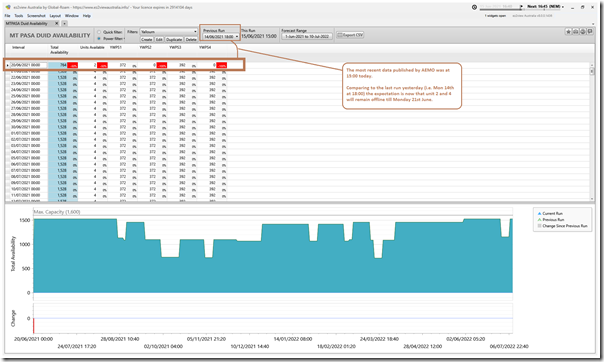 Stay tuned on that one!

… as an aside (about this widget & visibility of the data)

More generally, though, with respect to this widget, we continue to say a big thank-you for ERM Power in making their Rule Change submission (thanks Dave and Ron, etc) … and to the AEMC for approving it (mostly).

… but why, oh why, was it not also extended to include the same data for technical availability on Semi-Scheduled plant, which are going to play an increasingly important role!?

(B)  Supply and Demand in Victoria

Speaking more broadly about the supply/demand balance in Victoria, I also noted that earlier today (i.e. at 14:05) AEMO had tweeted this message:

For those with licensed access to ez2view online, this 7-day outlook view for the Victorian region could be a handy way of keeping an eye on what’s forecast: 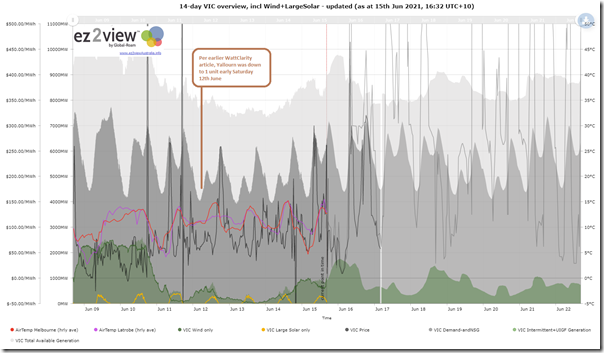 You can access your copy of this trend here.

One eagle-eyed reader sent me a reference to this tweet from 9News Melbourne from 18:10 on Tuesday 15th June (so appropriate to tag at the bottom of this article): 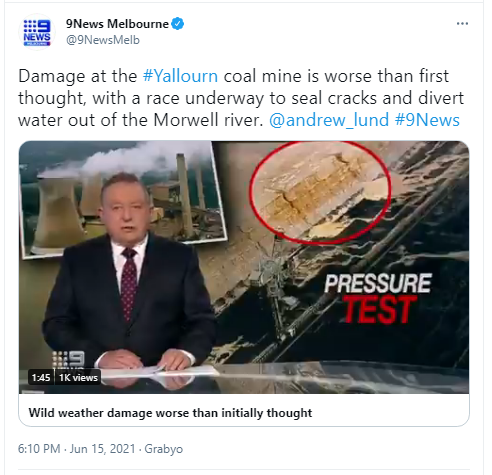 The news report (click to open) provides a sound and pictures of what’s happening.

Using some of the new widgets to be released in ez2view v9.4 we take a quick look at the extended outage of Swanbank E gas-fired power station.