As noted yesterday I was away for much of the past week … and, in wading through my inbox today I noted that the AEMC had published its Draft Determination in response to AEC’s application to lower the Registration Threshold for Generators that are required to be Scheduled (or Semi-Scheduled) in the NEM.

There’s a coincidence here, as it it was only 7 days ago (Monday 21st June) that I had posted about ‘Villain #8 – the Invisible Man’ in thinking about concerns similar to (though perhaps not identical to) those raised by the AEC:

The draft determination will be open for submissions until Thursday 19 August 2021.

In particular, we’ll be keeping these deliberations in mind as we continue the number crunching underway for our Generator Insights 2021 release.

(A)  Two things that jumped out

In a quick scan, two things jumped out at me:

In the AEMC Media Release, there was this quote from the AEMC Chair, Anna Collyer:

“When it comes to the transmission network, there will be another avenue for dealing with any potential impact of larger numbers of small generators in the future. Work is under way as part of the Energy Security Board’s (ESB’s) post 2025 market reforms to consider a
voluntary ‘scheduled lite’ model for smaller generators. This, combined with work on creating a two-sided energy market will be valuable tools for AEMO’s management of non-scheduled generators.”

Whilst I can understand the desire not to duplicate work streams, there is also the risk of ‘kicking the can down the road’ in relation to the broader post-2025 agenda.  I’ve already flagged some concerns about this here.

2)  Possible inaccuracies in scheduling (and forecasting)?

On the main project page there was also the note that:

“There is insufficient evidence that non-scheduled generators between 5MW and 30MW are contributing to inaccuracies in scheduling and forecasting.”

Also on Monday last week (referencing the number crunching he’s been doing for his Appendix within GenInsights21), Linton posted some early thoughts about ‘Is the predictability of day-ahead demand improving?’.

There’s more that needs to be done in our GenInsights21 number crunching (here’s a reminder that those who pre-order now can save on what the price will be after release) but it’s important to keep in mind that:

What Linton has published here shows how the P30 predispatch forecast for ‘Demand and Non-Scheduled Generation’ (i.e. a measure that aligns with Operational Demand) looks 24 hours ahead of the actual half hour.  Part of the reason for using a 24-hour look ahead in this case was the linkage to concepts of a ’Day Ahead Market’ (which has a number of advocates as part of NEM 2.0).

That does not necessarily mean that the same conclusion could be drawn if we used some other look-ahead period.

What Linton has published does not really consider any specific challenges there might be within the dispatch process itself…. and in particular in terms of how these generators respond to high prices, or negative prices.

Eleven months ago (on 24th July 2020) I posted some thoughts in ‘Striving to understand the underlying challenges with Semi-Scheduled generators (re AER Issues Paper)’ that highlighted ‘concerns still to be addressed’ with respect to Non-Scheduled (and perhaps not even registered) generators. 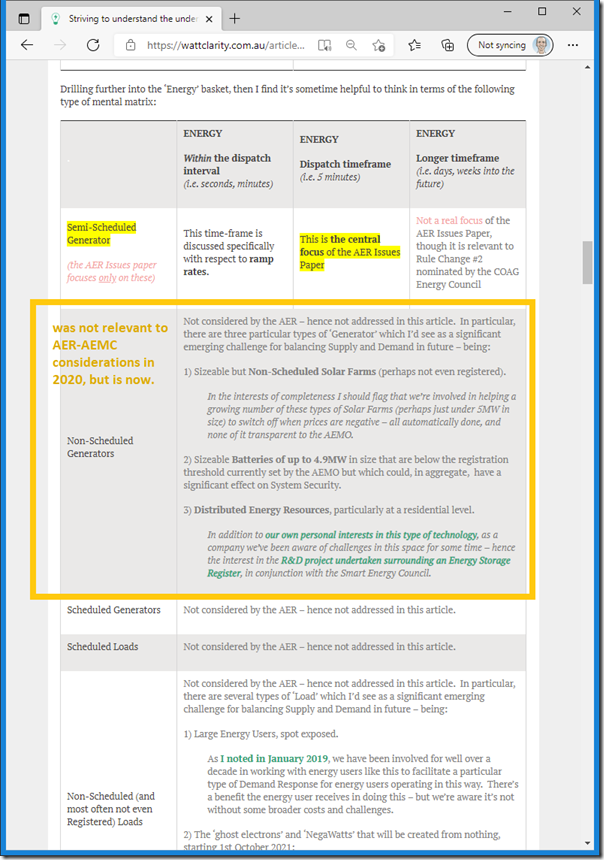 (B)  Are we talking about 3 Different Levels of visibility?

It occurs to me that we might be really talking about combatting Villain #8 at several different levels:

At the smallest level, we’re talking about a register of all capacity capable of injecting into the grid.

This would be static data, and could be similar to what the AEMO has been developing with its Distributed Energy Resource Register.  There might be a category of registration that caters for this.

Surely we should be striving to make this process as easy and painless as possible … so at the very least AEMO has (and can publish – to the extent privacy concerns permit) as broad as possible a list of assets connecting into the interconnected grid as possible?

Even doing this might help to combat Villain #8 to a certain degree?

For a subset of generators registered like the above (but not seen as significant enough for registration as Scheduled or Semi-Scheduled) there might be the requirement for AEMO to at least have real time visibility of production levels.

Noting that we have been puzzling about the extent to which the Semi-Scheduled category is itself sustainable and scalable (like with this series of Case Studies focused on Aggregate ‘Raw Off-Target’ – something to be explored further in GenInsights21), at a higher level we’re talking about a higher level of visibility including:

(a)  Of their intention to supply at different pricing levels (via the bids); and

(b)  Of their actual performance (or Non Conformance as the case might be) with the dispatch targets.

The AEMC recently published a draft determination on Primary Frequency Response – proposing it remain mandatory, and to introduce big changes to the causer-pays process, including payments for good performance.

A few additional thoughts about proposed changes to the MT PASA process, informed by our conclusions in Theme 14 within Part 2 of our Generator Report Card.