When I last had a look at the expected return-to-service date for the Callide units (on Wednesday morning 16th June) I saw:

2)  in that run, the intention was that Callide B2 unit would be back online tomorrow (Sunday 20th June) if not beforehand (i.e. that run did not show the plan for earlier days).

3)  Also at that time I wondered where Callide B1 was … though it did return that afternoon (a little later than earlier plans).

Today (Saturday 19th June) I’ve had a quick look and see that the scheduled return to service for Callide B2 has slipped a couple days since Tuesday evening … now expected back sometime Tuesday 22nd June 2021.

Here’s the ‘MT PASA DUID Availability’ widget in ez2view using the most recent AEMO data – being published for 12:00 today: 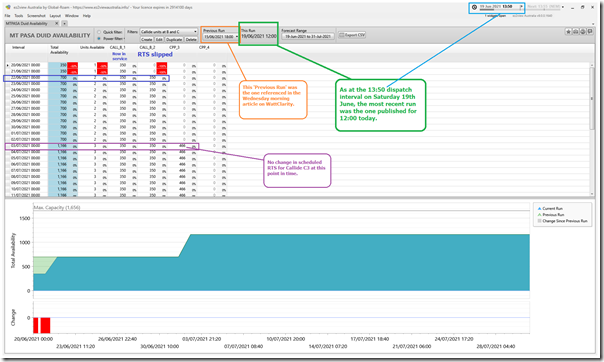 I’ve not specifically looked to see when these plans were changed (i.e. in between Wednesday morning and now).

Also noted is that Callide C3 remains scheduled to be available again (and presumably online) on Saturday 3rd July 2021.

With GenInsights21 released two weeks ago (and only yesterday all pre-orders and orders processed and invoices provided, as noted here) I’m catching up on a number of different things – actions I promised for clients, and also what’s been happening…

A short article marking return to service for the Callide C3 unit, which has been offline since 25th May 2021.

1 Comment on "Return to service slips further, for Callide B2"