Following to the fourth article today (about Actual LOR2 and wafer-thin IRPM) I thought it would be of interest for some users to see what’s running, and what’s not running, at times when the supply/demand balance in QLD is so tight – using this snapshot from ez2view at 21:50. 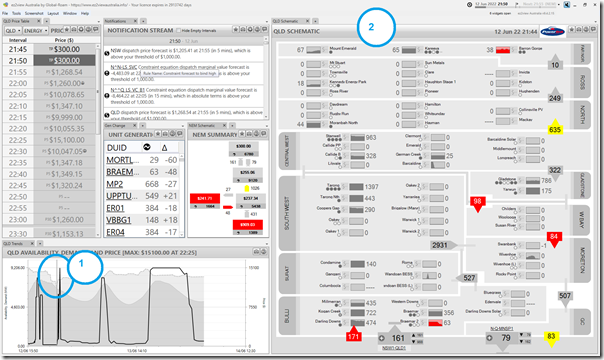 With reference to the numbering on the image:

(a)  No doubt part of the reason for the Market Direction

(b)  This will be something that would be worth closer attention in the coming days, with the benefit of ‘Next Day Public’ data

(a)  Far too late in the evening for any solar

i.  Coopers Gap in south-west is running quite hard (290MW),

iii.  The Kennedy Energy Park Wind Farm is at 18MW (of 43MW MaxCap)

(a)  Three units of four at Callide are offline

(b)  Two units at Gladstone are offline

(a)  The NQ hydros are running strongly

(b)  But Wivenhoe shut down … and I’d have questions about how this is going to manage to operate under Administered Pricing!?

5)  There are a number of gas & liquid units not running, including …

(a)  Swanbank E is on long-term forced outage

(d)  Neither Mt Stuart or Yabulu are running

(e)  Oakey is not running

A quick record of some evening volatility in QLD on Thu 28th April 2022.

A short post, prior to further analysis next week, to notify readers that Reserve Trader has been dispatched today.

Queensland is back for round 2 – Wednesday 9th March 2022

Following Tuesday evening’s fireworks, we take a first look at whether Wednesday evening might be a rerun.

1 Comment on "With reserves in QLD wafer thin, here’s an ez2view of what’s running and what’s not…"