On Tuesday 29th March 2022, the AEMO released its annual Gas Statement of Opportunities (GSOO) for 2022: 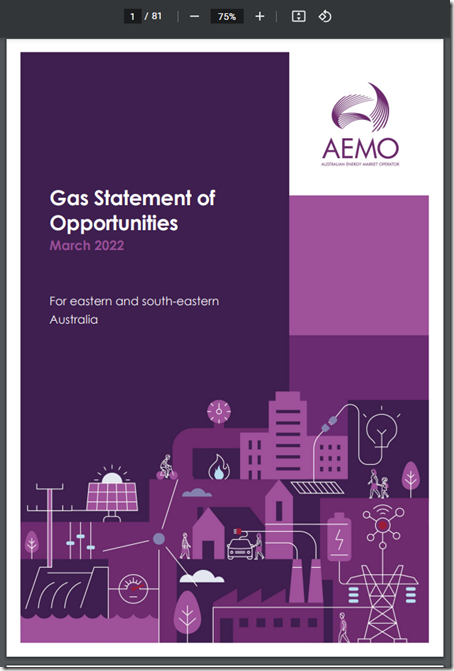 Further documentation is available here on the AEMO website.

(A)  The future represents Uncertainty, and ‘High but Infrequent’ Gas Demand

In today article ‘Future role of gas in Australia’s grid is uncertain, AEMO says’ in the AFR, Colin Packham picks up on what (it seems to me) are two of the most important descriptors of what the future is looking like with respect to the NEM (and gas use therein): 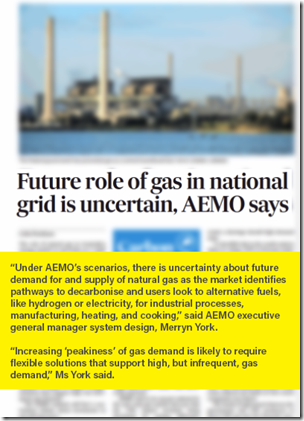 Both quotes from new EGM System Design, Merryn York, were provided by AEMO in this Media Release.   In particular the latter one is worth repeating:

What’s not stated in that quote, but is implied (and was noted earlier) is about the uncertainty about when those large gas requirements will occur.  Obviously the weather will have a major bearing on this, in a number of different ways – e.g. cold weather driving demand for gas heating, possibly coincident with lower yield from solar generation driving up requirement for gas-fired generation.

Welcome to the challenges of the future…

1)  With respect to all types of dispatchable plant (not just gas-fired); and which

On the day of its release, Bella Peacock of PV Magazine wrote the article ‘Variability compounding complexity compounding risk: the state of play in the NEM today’ highlighting ‘variability’ and ‘complexity’ and ‘risk’ as three of the key challenges that resonated in her review of GenInsights21.   On this page on WattClarity, you can read more of the comments we’ve seen that have been made about the GenInsights21 publication since its release.

(B)  Other early media coverage

In addition to the AFR coverage above, I also saw these articles on a quick scan this morning:

1)  In the Australian, Perry Williams writes about ‘Gas shortfall fears for next year: supply squeeze threatens to leave users out in the cold in 2023 winter’ highlighting the near-term concerns for just over 12 months away.

2)  In the Guardian, Peter Hannam wrote about ‘South-east Australia risks temporary gas shortages by 2023 winter, energy review warns’, picking up on the same concerns as Perry has.

3)  In a quick scan, I could not see anything in SMH or the Age

4)  I also could not see any articles on RenewEconomy (though Michael Mazengarb did tweet this, focusing on the Australian but not the Guardian).

5)  Nothing also could I see in PV Magazine.

Over on social media, I did note that Tennant Reed was quick off the mark to redirect from the GSOO release to one of the other current challenges – booming prices for baseload futures: 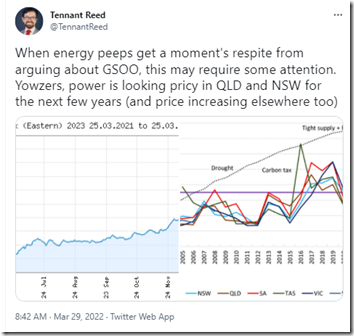 … thought Tennant did have this to say about the GSOO, and the AFR coverage of it.