The causer-pays changes include calculating and applying the causer-pays factors at trading (5-minute) intervals and making payments to participants for positive performance.  AEMO is to consult on a replacement to the causer-pays procedure within 9 months of rule commencement and complete the implementation 18 months after that.  The AEMC says, of the reasons for the draft rule:

“The benefits include optimised frequency control, more efficient use of regulation FCAS, and efficient investment, operation and use of PFR from a diverse set of technologies”. 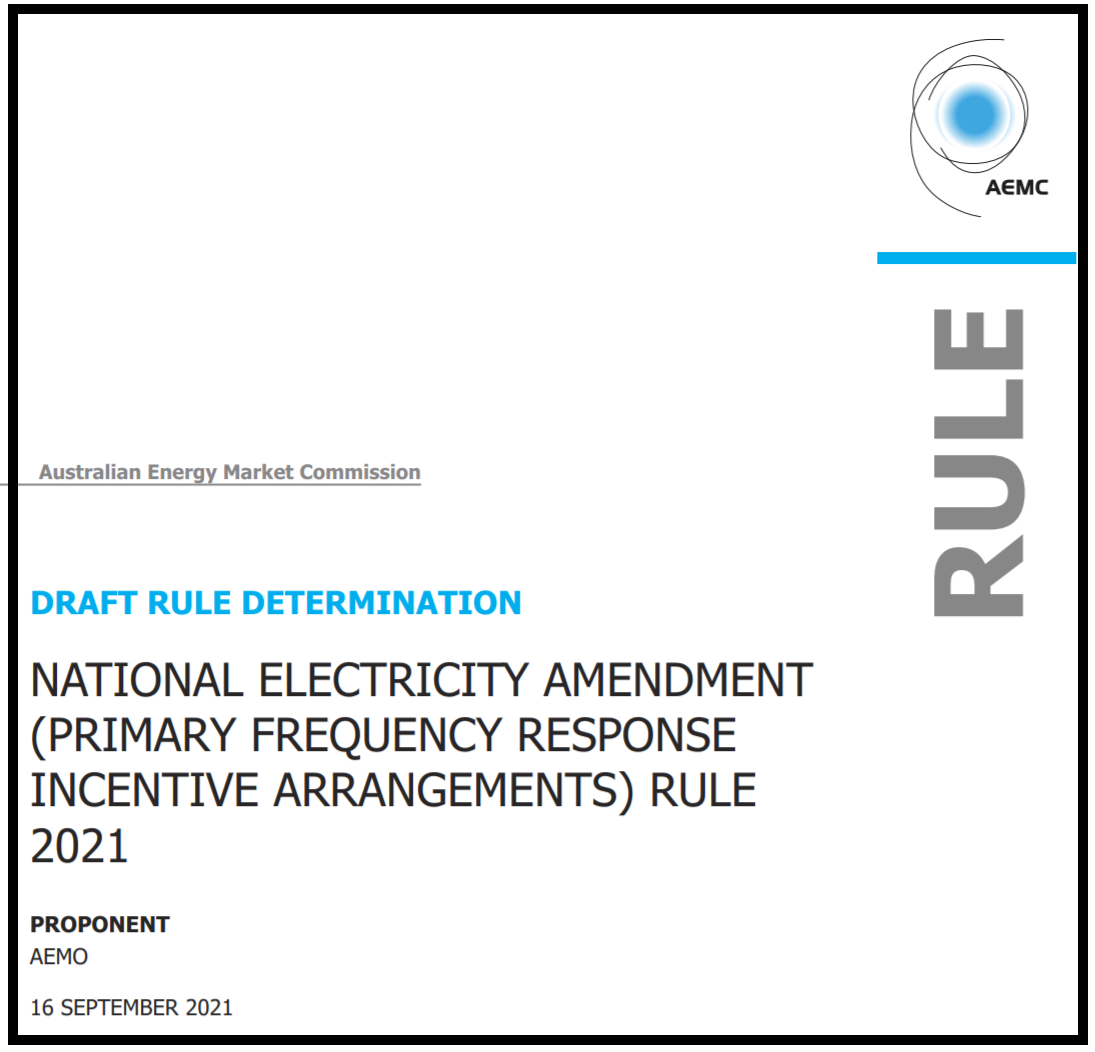 A little of the back story.

Mandatory Primary Frequency Response (PFR) was introduced by the AEMC in early 2020 to manage declining power system frequency performance, a risk to power system security. The AEMC considered the situation urgent enough at the time to mandate PFR, but needed to consider if market or other arrangements would be a better long-term solution (noted here), so included a sunset clause for mid 2023.

The AEMC has now considered a complementary AEMO rule change request, originally titled “Removal of disincentives to the provision of primary frequency response under normal operating conditions”, and has made a “more preferable draft rule” which is the AEMC’s way of saying they did something different to what was proposed. The rule change proposed (among other things which were implemented in the mandatory PFR rule) for participants providing PFR to be exempt from the recovery of regulation FCAS costs (the causer-pays process), which isn’t what the AEMC’s done here.

There’s more background on FCAS here and here, and PFR here, and here’s some observations about the effect of PFR in 2021.

Next, let’s look at what’s happening with the mandatory PFR.

PFR is a narrow-band droop response (proportional response in MW/Hz), to be provided under the Mandatory PFR determination by all scheduled and semi-scheduled generators dispatched above 0 MW whenever frequency is more than +/- 0.015 Hz from 50 Hz, with no requirement to keep headroom or footroom to do so.

In simple terms – if the power system frequency moves more than 0.015 Hz away from 50 Hz, a generator must move its energy output, if it has the capacity to do so.  Wind and solar generators when unconstrained would typically generate at the full capacity for the resource available, so would not have spare “headroom” to generate more (“raise”) if frequency declined. In this draft determination, the AEMC reviewed whether there was a market or other option that would better meet the National Electricity Objective (to maximise benefit to consumers – which isn’t just about direct costs but also considers power system security impacts), and concluded that the mandatory approach was appropriate.

In particular, it considered that the PFR response is best delivered by a large proportion of generation plant, with geographic diversity good for system resilience in abnormal events such as when regions unexpectedly separate. The AEMC had independent advice and analysis that costs to generators have been minimal.

So if PFR is mandatory, why do we need incentives for its provision?

The simple answer is that the power system is changing, and the mandatory PFR rule doesn’t require headroom to be kept – so with increasing wind and solar generation (where keeping headroom is expensive), there might at times not be sufficient raise PFR without other incentives.

The “double-sided causer-pays” scheme proposed would incentivise participants (and not just wind and solar) to invest in providing better primary frequency control when it’s most needed. Also, by incentivising positive performance (that reduces the need for regulation FCAS services), this encourages a reduction in the use (and therefore cost to consumers) of regulation FCAS.

A big part of this draft determination is the sharpening of the incentives around the recovery of regulation FCAS costs so participants can respond (and invest) more efficiently in supporting good frequency control to benefit the power system. The basic metric for performance depends on the deviation of a plant’s output from an ideal linear trajectory from one dispatch target to the next and the need of the power system for more or less output at that time (i.e. how much is it helping or hindering?). The existing causer-pays process calculates a single “market participant factor” (also known as the “causer-pays factor”) every 4 weeks, using this single value to split the pool of regulation FCAS costs for weeks 3 to 6 after that. There’s some netting of good and bad behaviour, and if the aggregated result over the 4 weeks is good then the generator pays nothing, but there’s no incentive for more positive performance.

The current causer-pays factor calculations are astonishingly complex especially where localised constraints are involved (this article looks at some of the complexity), and the time delay in application means there’s little or no relationship between what the power system needs right now and what generators are providing.

About the draft determination

This draft determination proposes these key changes to the recovery of regulation FCAS costs:

I was interested to see (in the appendix to the draft determination) how the positive and negative performance factors would be taken into account. At a high level (noting the detail is often very detailed):

This means it may cost more for the poor performers, as they have to pay for their share of the service costs and pay a performance incentive to others. The AEMC estimates the new scheme would result in short-term increase in costs for frequency regulation of about 10%, including paying for the positive contributions, but over time the incentives would drive behaviour changes that reduce the need for regulation services.

The AEMC’s taking submissions on the draft determination until 28 October 2021, and then stay tuned for an epic causer-pays procedure consultation by AEMO after that!

Two brief (but important) observations made possible with a chart published on RenewEconomy with respect to the Hornsdale Power Reserve.