This article was originally posted on SolarQuotes.com.au, where there are other comments.

The big shakeup starting next year puts the Clean Energy Regulator (CER) in charge of solar installer accreditation, giving them the power to police the industry and punish shoddy installers.

These new powers will mean:

Enforcement by the CER will mainly occur by responding to complaints by home and business owners who have been hard done by.

Sadly, a compulsory solar inspection scheme will not be introduced.

As far as I can see, the changes are all for the better.  Installers that do high-quality work should have nothing to worry about and will only benefit overall from the changes.

The implementation of new rules may cause problems for installers doing the right thing.  But the Clean Energy Regulator is clearly trying to get it right and I’m fairly confident they’ll only cause headaches for those whose work is substandard.

If the new rules are well-implemented:

Demand For Solar Is High

The Clean Energy Regulator online information session began with a recap of how there has been huge growth in rooftop solar installations over 5 years.  During this period the subsidy for rooftop solar power — the number of STCs received per kilowatt of solar panels1 — has been declining but installations have taken off: 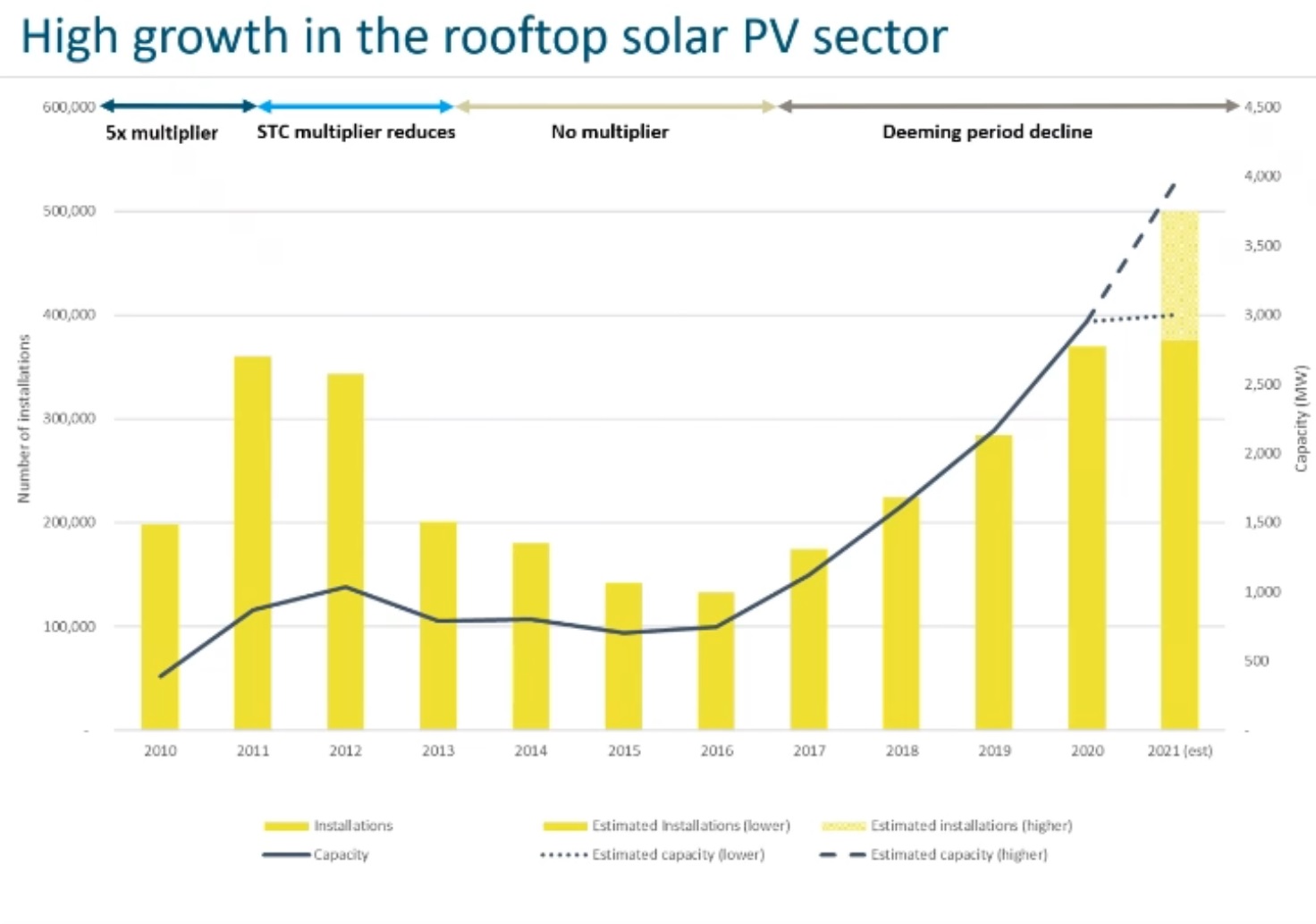 The dotted line with the long dashes at the end is the estimate for this year if last year’s boom had continued, while the short dotted line is the estimate if COVID threw a spanner in the works. The reality has been between the two. This graph shows the number of installations and not  solar capacity installed, which is higher than the graph suggests because the average size of systems has been growing.

Around 3 gigawatts of rooftop solar were installed last year — a 35% increase over the 2.2 gigawatts installed the year before.  While growth in the number of installations has been much lower this year, I expect Australians will install over 3 gigawatts because the average system size continues to increase.

Solar power is popular is because it’s an excellent deal for almost every home and business.  For most Australians, the simple payback period of a solar system — from an installer who does quality work — is under four years2.

The problem is, not every installer does quality work.  There are quite a few offering rock bottom prices along with rock bottom quality.  If you get a badly installed solar system then the simple payback time can be infinity years because…

Using high-quality panels and a reliable inverter won’t protect you if the installation is lousy.  You’re not going to win any races in a car put together by monkeys, no matter how high quality the components may be.

I don’t know if he honestly wanted to do something about dodgy installers or just wanted to throw shade on solar in an attempt to squeeze a few more months of operation out of coal power stations, but either way, thanks for doing the solar installation industry a good turn, Angus.  If we could convince him not to use our money to pay coal power stations to remain open, that would be great. 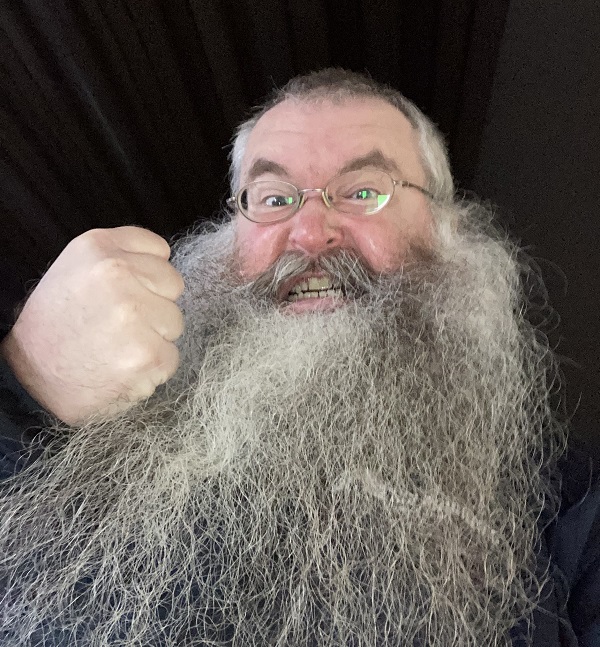 Sometimes you have to put all the rage behind you and not look back in Angus.

You can read the Government’s response to the review here.

The scope of the Integrity Review was to develop solutions for:

At the moment these issues are handled through the Small-scale Renewable Energy Scheme (SRES) and the Clean Energy Council (CEC).

SRES:  This scheme is responsible for the STCs that lower the cost of rooftop solar.  It is gradually being phased out and 2030 will be its final year.

CEC:  The Clean Energy Council is an industry body or “peak body”.  It’s in charge of solar installer accreditation and panel/inverter testing and approval.  A solar power system cannot legally receive the STC subsidy unless a CEC accredited installer is present and signs off on it.  Panels and inverters that don’t pass their tests are not approved and any system using them cannot receive STCs.

For various reasons, the CEC has not been highly effective at ridding the industry of low-quality installations.  Some of the reasons are not the CEC’s fault, while others are.  One reason there are still so many substandard installations is the CEC lacks “teeth”.  Because of this, the Clean Energy Regulator is taking over enforcement, and things will get quite bitey.

The SRES is being gradually phased out, with no more STCs after the end of 2030. However, in 2028 the number of STCs received by small-scale solar will be one-third the current amount, so from that point on some installers may not bother to use them.  This means changes need to be made well before then to ensure the end of the SRES and STCs does not result in a future rooftop solar quality decline.

The Integrity Review made 13 recommendations and the government accepted 12.  The recommendation that wasn’t accepted but only “noted” was about Buy Now Pay Later finance.  The dirty dozen that survived — or maybe tidy twelve since it’s the Clean Energy Regulator — cover three main areas.  In the CER’s own words they are:

I’ll cover the main changes that will occur below.

One Strike — You’re Out

In a major change in enforcement, if an installer puts in just one solar system that does not perform as promised — or perform at all — and does not rectify the situation, the CER can require them to show cause why they should not be disqualified from installing solar.  This is a major change from the current situation where bad operators supply multiple poorly performing systems while remaining in business year after year.

The CEC currently accredits solar installers.  This will be changed to put the CER in charge of accreditation.  They will decide what training is required to become a solar installer and then tender out the process.  One or more bodies will be selected and paid to perform the role of accrediting installers.

Having one Commonwealth regulator in charge of accreditation with the power to kick out offenders should be far more effective at reducing low-quality installations than the current set-up.

Training On Legal Responsibilities Will Be Required

The CER made the point the current training of solar installers is good.  For the most part, it is likely to be kept in its current form.  But the CER will add training in the legal obligations of installers.  Part of this will make it very clear that committing fraud by signing false statements is not on.

An Accredited Installer Must Be On Site

For a solar installation to be eligible to receive STCs, the system must be designed by a properly accredited person. An accredited installer must be on-site at the beginning, middle, and end of the installation.  (Going to lunch or popping off for a fag is permitted.)

Some large solar retailers have had an accredited installer sign off on installations they never attended.  The CER made it clear that this will stop and the CER will bring fraud charges against those who do it.  It appears serious jail time is on the cards for some people.

To ensure compliance in the future, the Clean Energy Regulator is likely to require an accredited installer to take selfies with geo-locked coordinates at the beginning, middle, and end of an installation.  So, Big Clean Brother will be watching.

While the quality of the majority of solar panels and inverters used in Australia has improved over time, it is still currently too easy for a manufacturer to send in decent quality components for testing and then, after they’re approved, supply lower quality versions.  This is how we can end up with panels in Australia that fall apart after a few years and are potential fire hazards.

Manufacturers of quality solar hardware have complained about this many times in the past.

The top three steps to fix this are:

Component testing and listing will be opened to the market and made more competitive.

While consumer guarantees protect households, installers buying wholesale are not.  This improvement in the quality control of components will provide them with additional protection.

Solar Retailers To Be Held Accountable

The CER will have the power to prohibit poor performing retailers from selling solar PV or receiving STCs.  These prohibitions can apply to the company’s senior officers so they will no longer be able to work in the solar industry.  This will prevent them from “phoenixing” and restarting an old company under a new name.  As a further anti-phoenix measure, the Clean Energy Regulator will disqualify new retailers linked to bad actors.

CER Will Keep An Eye On Buy Now Pay Later

While the CER will take no strong action to improve the current, dishonest by design, state of the buy now pay later (BNPL) industry3, the Clean Energy Regulator says they will keep an eye on it.  This action is not as strong as what I’d like to see taken against its more disreputable aspects…

…but it’s better than closing both eyes and giving free rein to bad finance.

There Will Be An Online Tool

The CER said there will be an online tool to help inform consumers.  I rolled my eyes and felt a little cynical on hearing this, as I’d like to consider myself an online tool who has been helping consumers for years.  But any additional material on the internet that helps consumers is welcome.

The CER won’t require compulsory inspections of solar systems.  While a fully independent inspection of every solar power system would be an effective way to ensure quality, it would be costly and rejected for that reason. Instead, states will continue with solar inspections if they wish, as with Tasmania’s high-quality inspection system and Victoria’s low-quality one.

Some will be disappointed by the lack of an inspection regime, but the coming changes should greatly improve average system quality.

No Direct Action On Batteries

The Clean Energy Regulator will not — for now — be taking action to direct ensure the quality of battery installations.  But if a battery is installed with a solar system and any part of that system does not meet Australian standards, they can take action against the installer and this includes the battery.  Also, by taking action against poor quality solar installers, they are certain to raise the quality of battery installations by kicking out lousy installers.

No Immediate Change — But Change Is Coming

The Government has budgeted $19.2 million to implement the changes, but nothing will happen just yet.  New regulations are required and these take time to put in place.  Consultation on the proposed reforms will be later this year.  While some of the details may change, I expect the broad outlines I’ve described will remain.

I’m looking forward to it because — to me — it’s clearly changing for the better.