Since that time, social media has been inundated with theories about what went wrong (and how it’s all been due to [INSERT HOBBY HORSE HERE]).  Others have noted how this kind of speculation may not actually be helpful.

Information Piece #1)  Firstly we had Mark Ludlow’s wonderful account of some of the experiences of people onsite that afternoon, followed up by what the damage is actually like after the fact.

Information Piece #2)  Then we had AEMO’s Preliminary Report into the broader event.  I’d just like to particularly highlight this part from the bottom of page 10 of the report:

“Immediately prior to the event, Callide Power Station (Callide) C4 was operating at 278 MW.   At 1334 hrs on 25 May 2021, Callide C4 stopped generating but did not disconnect from the power system.   At 1340 hrs, CS Energy informed AEMO of a possible turbine hall fire at Callide C.   Around four minutes later, at 1344 hrs, Callide C3 tripped from approximately 417 MW.

That amount of energy going the wrong way was a high likelihood path to a calamity.

With this preliminary report released, one would hope that the speculation would die down, somewhat … however given human nature is what it is, I don’t expect that to happen.  As such, I thought I would add something else (Information Piece #3, if you will) – which is the ‘A’ Page for the CPP_4 unit from the GSD2020, released at the start of the year.

It visualises 10 years of operational and commercial performance for this particular unit, covering a wide range of performance metrics: 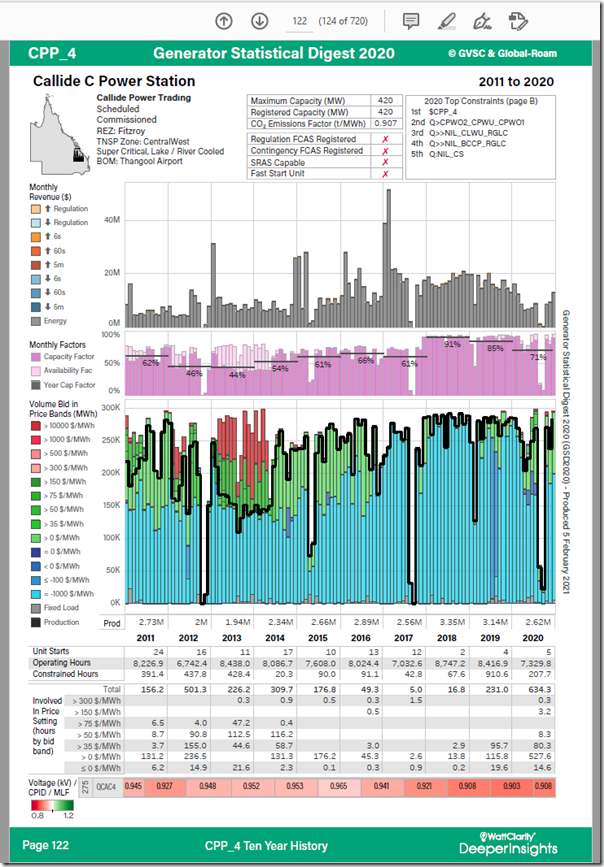 Click on the image, to open a fuller sized view.

At least now those discussing theories of failure modes at Callide C4 can have visibility of some real data with which to formulate their theories!

My own view is that it’s likely to be some time, and the result of intensive investigations onsite and with respect to high-speed multi-faceted data readings in the unit SCADA system, that we’ll actually know what went wrong.

An updated view of the return to service schedule of Callide C3 and C4 … along with Yallourn unit 4.

Following a number of requests from our clients, we are pleased to note that a GSD2020 Data Extract is now available.

Callide C4 return to service now not till December 2022

There’s been a 6-month delay in return to service expectation for the damaged Callide C4 unit.

Be the first to comment on "Ten Years of Performance History for Callide C4, from the GSD2020"