At the other end of the NEM to the QLD region (which has been experiencing almost daily bouts of extreme pricing in part due to maintenance scheduled during ‘off season’, such as yesterday) is the South Australian region – which has also been experiencing volatility frequently in recent times (again with maintenance scheduled during ‘off season’ a factor), such as this snapshot from NEMwatch at 07:15 this morning (Tuesday 17th May): 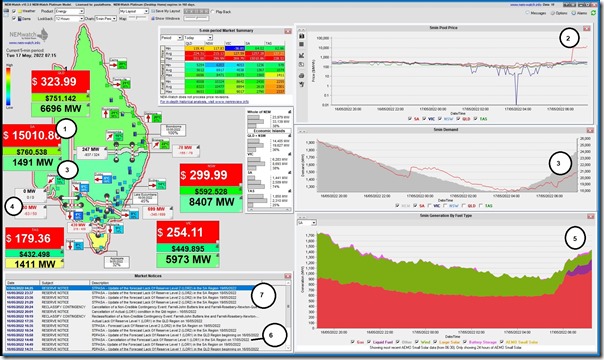 With respect to the numbered annotations on the image:

3)  ‘Market Demand’ in South Australia at this time is only a mild 1,491MW (i.e. still in the ‘green zone’) but climbing off the early morning low.

4)  Support from Victoria is constrained heavily:

(a) the AC-based ‘Heywood’ interconnector is allowed to flow only 50MW west from Victoria;

A quick look at ez2view shows me that this is because of the ‘VS_050’ constraint equation, which limits transfers to 50MW as part of the of the ‘I-VS_050’ constraint set – which will feature for the rest of this week (daylight hours) and also in the coming weeks, as we see here in the ‘Constraint Sets’ widget: 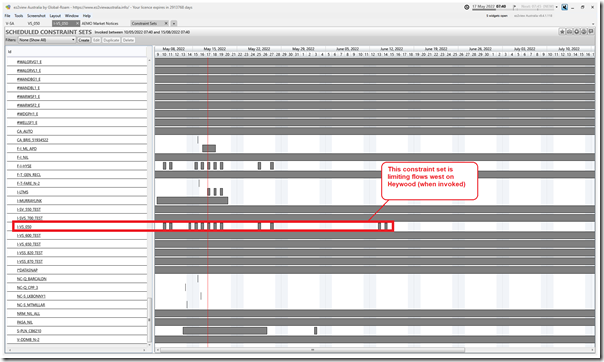 (b)  And the DC-based Murraylink interconnector is not flowing at all:

That’s because of the ‘I-MURRAYLINK’ constraint set, which is invoked out until the afternoon of Friday 20th May.

(a)  the contribution from wind has been declining through the morning, inverse to the increase in Market Demand,

(b)  there’s 0MW contribution from solar (across the Tailem Bend and Bungala 1 & 2 plant),

(d)  The relatively small contribution from South Australia’s batteries are shown in pink at the top of the stack.

6)  Some possible shortage was forecast in advance via Low Reserve Condition Notices – but note that the warning for LOR1 today was cancelled at 14:00 yesterday

7)  We note that currently there are LOR2 warnings present for South Australia for both:

Alarms in one of our NEMwatch dashboards alerted me to the plunging level of Scheduled Demand seen this afternoon in the the Victorian and South Australian regions of the NEM – a new record low point for South Australia.