Last week’s market volatility in QLD and NSW was due to a number of factors (discussed in articles on Mon 2nd May, Tue 3rd, Wed 4th and Thu 5th ) – but one significant factor was constrained flow north from Victoria, which was due (at least in part) to an outage covered by the ‘N-RVYS_2’ Constraint Set.

(A)  Network outage has been extended

When I was looking last week (e.g. on Monday 2nd May), the outage was scheduled to end at the end of the week (noted on 5th May it was scheduled to end at 18:00 Saturday 7th May with the suspicion that this was also a delay on earlier) … but something must have gone awry in the process, with expected return-to-service now looking like 18:00 on Friday 13th May 2022.

This we can see in the ‘Constraint Sets’ widget in ez2view here: 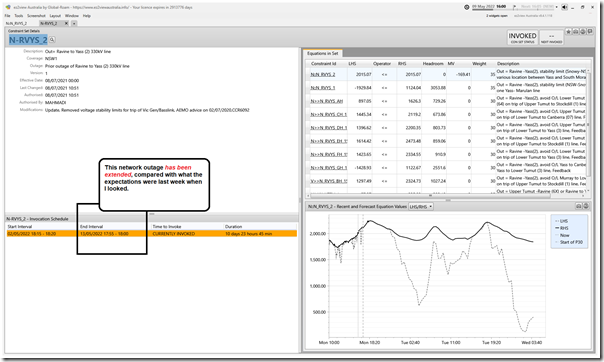 PS1 – one of our readers has suggested that what follows (the way it was originally worded) would be likely to be misinterpreted by some of our readers who aren’t so familiar with constraints (was written in a rush, with limited time).  So what follows is an attempt to write it more clearly.

(B)  Flows into Sydney limited due to the outage

In the table on the right of the image above, we see a number of constraint equations as members of that constraint set … with the ‘N::N_RVYS_2’ Constraint Equation being top of the list (and significantly bound at the 16:00 dispatch interval that is snapshotted in that image).

This prompts me to open up the new ‘Constraint Dashboard’ widget to look at the ‘N::N_RVYS_2’ Constraint Equation in the v9.4.1.118 ( in-development = not yet released) copy to see how the new developments make things clearer.

Readers are reminded that the outage affects the flow capacity between Ravine and Yass in southern NSW and so limits flows in from southern NSW (or Victoria, by extension) into the Sydney RRN.  It’s a ‘radial’ constraint.

Here’s what I posted in the article when it was published on Monday 9th May: 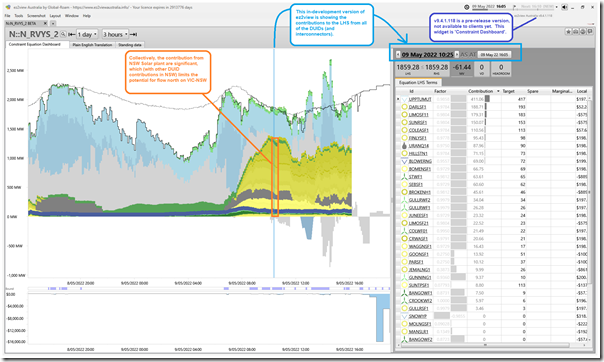 There’s work to complete before release (including ironing out some bugs) but it’s showing promise – for instance in making it clear:

1)  how the constraint’s been bound this afternoon and at earlier points in the day, with the LHS growing during the day:

(b)  But the hydro backs off as solar ramps up through the morning.

(b)  in this particular dispatch interval, that’s so much so that there’s a small flow south (NSW to VIC), despite the price difference being the other way around

(c)  that phenomenon (i.e. counter-price flow) is something which has been happening quite frequently in recent times (for various reasons – not specifically related to this network outage), and is something we’ll be looking to explore further in subsequent articles.

Looking forward to driving this widget further, with the input of our keen ez2view clients!

PS2 – here’s a time-travelled view of the window above for those who are interested, in which the contributions are able to now be actual (not estimates) and other aspects of the table can be filled in (remember that this is still very much a work in progress): 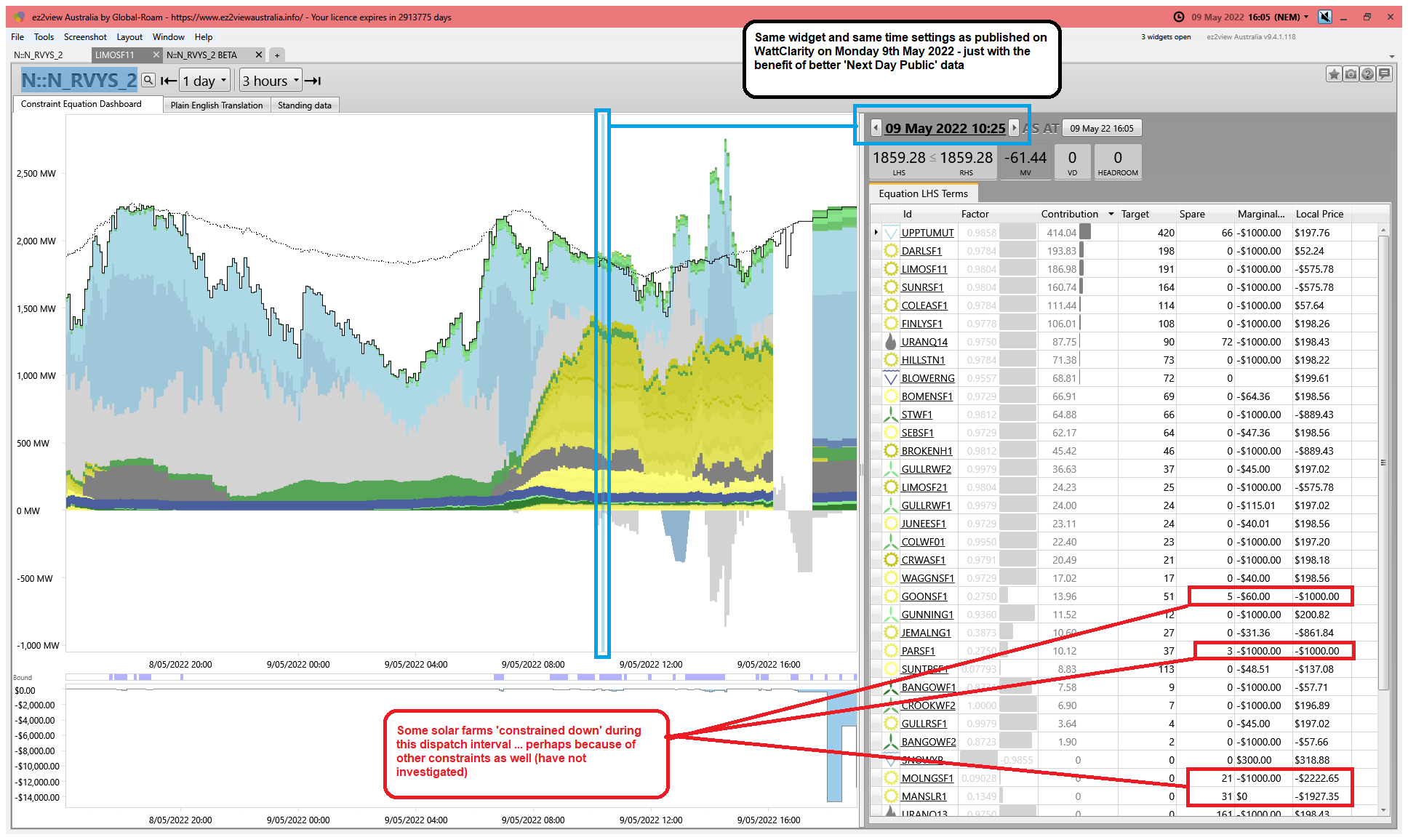 Spot price up in QLD and NSW, with only 1,532MW of spare capacity Monday evening 12th July

A snapshot of the start of price volatility in QLD and NSW on Monday 12th July 2021.

How Good is Solar Farming?

Another day where LOR2 notice issued for SA – what does it mean?

AEMO issued a Market Notice this morning for an LOR2 “Low Reserve Condition” in South Australia. Here’s my sense of some of what’s happening.