Hopefully not as many articles here as there were yesterday, but thought it worth noting that the 18:35 dispatch interval was the one in which we saw the first spike in the QLD region … to $8,800/MWh in response to a 92MW increase in ‘Market Demand’ at a time when all the contribution from solar has gone to bed across the region, but the cooling storms have not yet arrived.

Here’s a snapshot from NEMwatch highlighting the 18:35 dispatch interval. 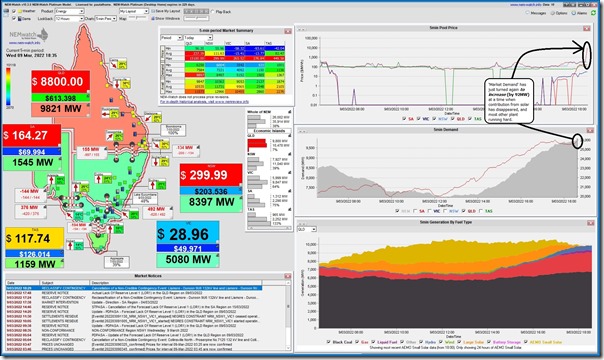 Take particular note of the way in which the trend of ‘Market Demand’ for the QLD region has just started to turn, after it had been slowly declining from its earlier peak today (9,897MW at 17:35).

Here’s a time-travelled view from ez2view at 18:35 showing the ‘FinalMW’ values for output for all of the generation plant across the region.  Like I did last night, I’ve coloured each of the stations by fuel type (apologies for any mistakes made in the process!): 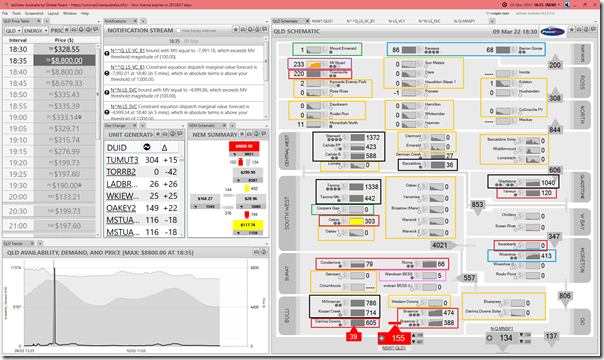 We can see it’s an almost identical situation to what happened yesterday evening (albeit that demand is a little lower in this dispatch interval), in that it’s pretty much the same plant that is missing:

2)  The Swanbank E unit is also still out.

3)  Two units at Gladstone are not running

4)  One unit at Mt Stuart is not running

5)  All the solar is producing close to zero, in aggregate.

6)  Both wind farms are producing close to zero, in aggregate.

7)  The Wandoan battery is barely exporting

Also, as was the case yesterday, imports from NSW are being restricted to ‘not much at all’ because of the same ‘N^^Q_LS_VC_B1’ and ‘N^N-LS_SVC’ constraint equations … which are both part of the ‘N-LS_VC1’ constraint set, which relates to an outage on the Lismore SVC that began on 5th February 2022 and is scheduled to continue until 30th September.

A first article on Wednesday 2nd February, looking ahead in the AEMO current forecast to what would be (if the forecast holds) a new record for QLD Region ‘Market Demand’