Whilst the AEMO’s release of the draft 2022 ISP on Friday this week generated the most buzz, it’s also worth recording that the AEMO released it’s ’Initial Roadmap’ for the ‘NEM Engineering Framework’ a couple days earlier: 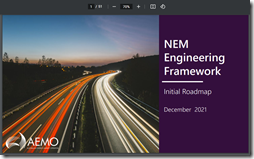 1)  Has followed Daniel Westerman’s BHAG for the broader Energy Sector to prepare the NEM (Grid, and Market) to accommodate 100% instantaneous renewables by 2025, given the rate of growth of renewables (and particularly rooftop PV) making this a plausible scenario that might unfold in only a few short years.

2)  It also follows on from the earlier Renewable Integration Study (the RIS was released in April 2020) and what AEMO is now calling the ‘NEM Engineering Framework’.

Without lots of steps being taken to manage the grid under such circumstances, preventative measures would need to be taken (such as curtailment, direction and other steps) to ensure the grid can continue to operate stably.  Already we have seen increasing amounts of grid curtailment:

1)  these have been discussed in AEMO’s QED publications, in numerous WattClarity articles, and elsewhere; and

2)  is being explored in ‘Deep Dive’ Appendix 24 in the upcoming GenInsights21 release.

The AEMO tweeted here on Wednesday 8th December that this was aimed at:

‘summarising the technical requirements, strategic design decisions, and need for ongoing industry collaboration to support an orderly transition of the power system.’

We’re in the home straight now for the completion of GenInsights21 (complete with its own Appendix 26 exploring some aspects of 100% Renewables as alluded to here) but I thought it would be useful to share this slide/page from this Initial Roadmap that identifies Six Operational Conditions that AEMO sees as some of the main challenges in being able to actually get to 100% Instantaneous Renewables. 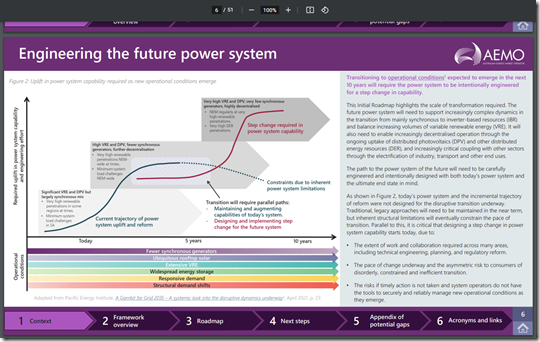 These are as follows:

We’ll, no doubt, be referring back to these later.

Not as simple as it appears – estimating curtailment of renewable generation

Curtailment seems like a simple concept, until you look closely at the details. In this article, Marcelle looks at how to estimate curtailment at wind and solar farms and explores some of the traps.