Well, energy sector acronyms seem to come and go* quicker than market rule change proposals – but the gist of the story seems to be that the Energy Security Board (ESB) today handed final advice on its redesign of the national electricity market (NEM) to Energy National Cabinet Reform Committee:

… two cases in point in terms of branding and buzzwords:

1)  What once was the MCE became COAG Energy Council (or was it the other way around?) and apparently now is the ‘Energy National Cabinet Reform Committee’ (ENCRC does not roll off the tongue).

2)  What once was mooted as (a grand-sounding?) NEM 2.0 became ‘post-2025 something’ (too measurable, in terms of a date?) but now seems to just be a vaguer sounding ‘Energy market redesign’. 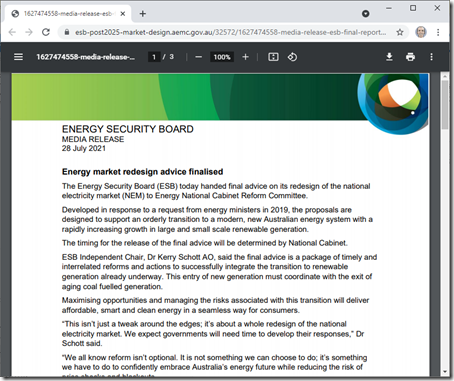 We’ll have to wait until the ENCRC (really does not roll off the tongue!) releases the ESB’s final advice to see for ourselves how much meat there is on the four big bones noted below … but Kerry Schott is quoted in the Media Release as saying:

“This isn’t just a tweak around the edges; it’s about a whole redesign of the national electricity market. We expect governments will need time to develop their responses”

In today’s three page media release, there’s a one-to-one correlation between these ‘critical areas’ and what are described as four ‘market design reform pathways’:

Apparently (according to the media release’ there is also ‘the medium and longer term direction for how the national electricity market needs to evolve.’ … but we’ll need to wait until the ESB ‘final’ advice is published to know more about what they are actually talking about, moving forwards. Perhaps that speaks more about NEM 2.0?

(C)  How has this been received?

For reasons that have not been made explicit (or at least are not clear to me), there seems to have been advanced copies of this advice circulated fairly widely even before it has been submitted to the COAG Energy Council … as there has been a cacophony of condemnation in what I have seen in the general media – including:

1)   In the AFR I noted that yesterday Angela Macdonald-Smith wrote that ‘Power market reforms to ‘chill’ green investment’ (made it to page 3 of this morning’s print copy) … though I do note this afternoon’s more supportive follow-on note that (some other!) ‘Generators back power reforms to keep lights on’.

2)  In the Australian yesterday, Perry Williams wrote that a ‘Battle brews over Energy Security Board’s plan for reforms to power grid’.

All-in-all, that seems quite orchestrated?

Where to from here?

1)   Some components are well underway (and some appendices 90% completed)

2)  But others have further to go

3)  We’d like to have a Q3 release, but that’s dependent on the heavy workload that existing reforms that Five Minute Settlement and the Wholesale Demand Response Mechanism represent!

The media release says nothing about this.

However it is worth noting that our article (published 30 April 2021) following the Options Paper did suggest that around today’s date the ESB anticipated:

“In around three months, the Energy Security Board (ESB) will be providing final recommendations for comprehensive reform of Australia’s energy markets to ministers on the Energy National Cabinet Reform Committee.”

So, at the very least, they seem to have hit their own target date.

One question that pops up (perhaps conditioned by ageing rockers going around again in repeated ‘Last Time Ever’ tours in a weird form of Groundhog Day) is how true it is that the ESB’s advice is really ‘final’.  Time will tell on that one…

How should the AER’s wholesale monitoring responsibilities change, to suit the changing market environment?

On Tuesday 21st December 2021 the AER requested the AEMC to consider changing the prescriptive requirements in the Rules for the AER to analyse particular types of market outcomes in particular ways, and instead provide the AER more flexibility in what its analysis covers.

This morning (Mon 7th Sept 2020) the ESB released its Discussion Paper into the design of NEM 2.0 – with 7 different work streams suggested (and submissions due 19th October 2020).

Articles about market reform – in the NEM and elsewhere.