In the last year and a half, market bodies have increasingly focused on how best to ensure that the NEM can be operated in a secure and reliable manner, particularly as we transition from a system dominated by large synchronous generators to more renewable energy and storage distributed across the system.  Several rule change processes co-ordinated by the AEMC and the ESB’s post-2025 market design reform have been centred around starting to explicitly procure and value certain system services. These are services beyond the provision of energy that are needed to ensure that the power system can be operated within its technical limits. One of the system services that are currently being explored by the AEMC and the ESB is the provision of operating reserves.

Balancing supply and demand of electricity is one of the many tough jobs that AEMO has. Whilst 5-minute market dispatch attempts to do this in the most economic way, the power system is dynamic and changes at every instant. Renewable and conventional generation move around their generation targets, there’s error in demand and renewable energy forecasts, and unexpected plant or network faults and trips can lead to supply-demand imbalances, load-shedding and even cascading failures that result in blackouts.

Reserves help AEMO manage these events, and securing upward reserves (i.e. those that address a supply deficit) is of particular concern. In shorter timeframes within a dispatch interval (milliseconds to a few minutes), AEMO procures frequency-responsive reserves (generators providing mandatory PFR and resources providing FCAS) to help them achieve supply-demand balance and ensure that system frequency is as close as possible to 50 Hz. However, over longer timeframes that stretch past a 5-minute dispatch interval, AEMO relies on the availability of reserve capacity that has been offered into the market but not dispatched.

These reserves are called in-market reserves and are linked to Lack of Reserve (LOR) conditions. LOR declarations enable AEMO to signal tight supply conditions to market participants and, should the situation become dire, bring in emergency resources and/or shed load. In-market reserves can come from dispatchable and flexible plants that can be started relatively quickly (e.g. some gas units and batteries) or in the form of spare generation capacity of a partially-loaded unit (otherwise known as headroom).

What is an operating reserve service?

What’s currently being discussed is explicitly procuring and valuing these reserves through what I’ll refer to as an operating reserve service. A couple of service design options were suggested by the AEMC in their Directions Paper on the subject which all essentially require a resource to provide a combination of two distinct but somewhat interrelated resource-specific capabilities:

Operating reserves are typically procured from dispatchable generation (i.e. coal, gas, hydro) and storage. However, within the limits of their energy source availability, wind and solar can be operated in a flexible manner and could also provide reserves (a great study that models operating solar in a flexible manner from the U.S.). It is also worth noting that loads can provide upward reserves by curtailing their consumption through demand response.  However, though demand response providers have been players in the NEM’s FCAS markets for many years, demand response following actual LOR2 or LOR3 conditions has traditionally been triggered as a part of the activation of emergency “out-of-market” reserves (RERT). Demand response will likely play a bigger role in the energy market (and potentially in determining the level of in-market reserves) following the implementation of the Wholesale Demand Response Mechanism in October this year.

Why do we need an operating reserve service?

Although the sufficient availability of in-market reserves is linked to AEMO potentially intervening in the market, these in-market reserves are not explicitly procured or valued. So far, the implicit incentive for offering in-market reserves is that they can be brought in when spot prices are expected to be high to help participants defend contract positions. If a contract position would expose a participant to paying out large amounts during periods of expected high spot prices, it’s likely they’d want to make sure they could generate and sell energy during these periods (i.e. be physically hedged).

There are a couple of reasons why we might want to explicitly procure and value reserves through an operating reserve service in the NEM:

Some questions we had and our work

A couple of us at UNSW’s Collaboration on Energy and Environmental Markets have been thinking about the question of operating reserves in the NEM. The questions we have are:

To answer parts of these questions, we did some preliminary market modelling of the NSW and SA regions in 2020 and 2025 (loosely based on ISP scenarios) in PLEXOS. In particular, we were interested in how much and when reserves are available across different horizons (i.e. reserves that can be converted to generation in 1 minute, 2 minutes, 5 minutes, etc.) after generation is dispatched against regional demand. We made several simplifying assumptions, all of which are listed in our submission to the ESB Options paper, but here are the more material ones:

The figure below shows the average realisable reserve capacities across a range of reserve horizons for a given hour of the day. Our model seems to suggest that reserve capacity is scarcer during evening peaks, and that reserve availabilities seem to be clustered based on the reserve horizon. For example, in the NSW 2020 and NSW 2025 ‘Central’ scenarios, the amount of realisable reserve capacity is similar across reserve horizons from 2 minutes to 10 minutes. While our assumptions make it easier for us to comment on the profile of reserve availabilities than the actual quantities, there also seems to be, on average, a reasonable amount of 5+ minutes reserve available in both regions and across scenarios. 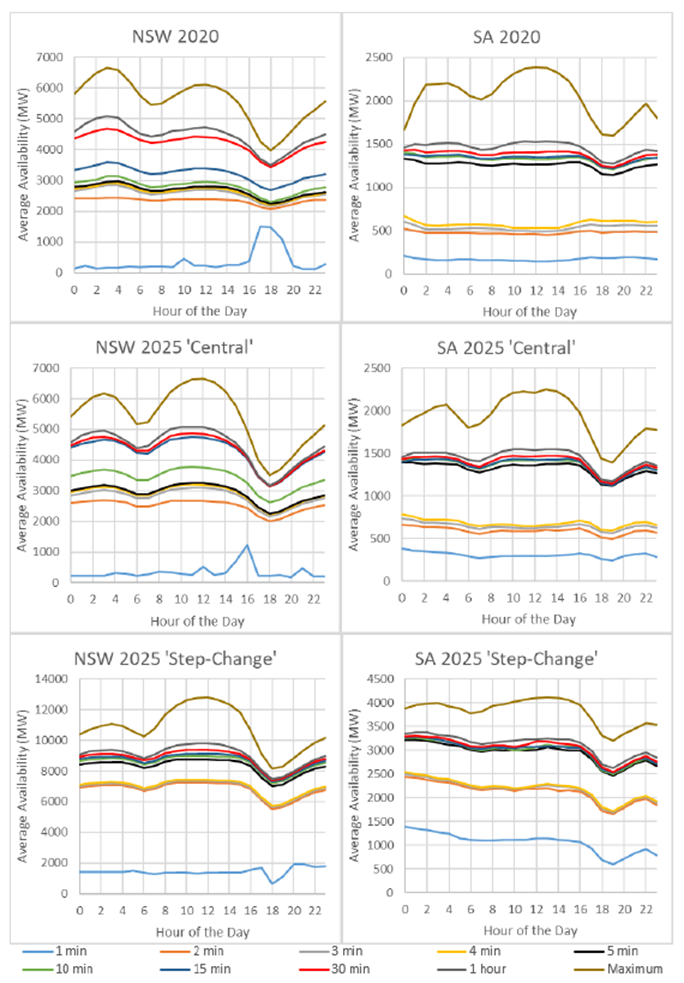 However, we were particularly interested in looking at “extreme” periods. To do this, we created “synthetic extreme days”, where we took the bottom 1% and bottom 0.04% of reserves available in each 5-minute window across a day and “stitched” those values together (see figure below). As such, these are not days that actually occurred in our models, but they represent a “worst-case” for each and every 5-minute interval. What we saw from these “synthetic extreme days” is that whilst reserves are still clustered by availability for most of the day, the evening peaks generally see capacity with reserve horizons between 5 minutes to an hour converge as total reserve capacity becomes scarcer. This is likely due to:

This suggests that the provision of operating reserves at these times of scarcity may come from more flexible resources anyway, regardless of whether the service specifies a shorter or longer horizon. As a result, concerns about limited providers are not necessarily exclusive to shorter reserve horizon service specifications during periods of operating reserve scarcity. 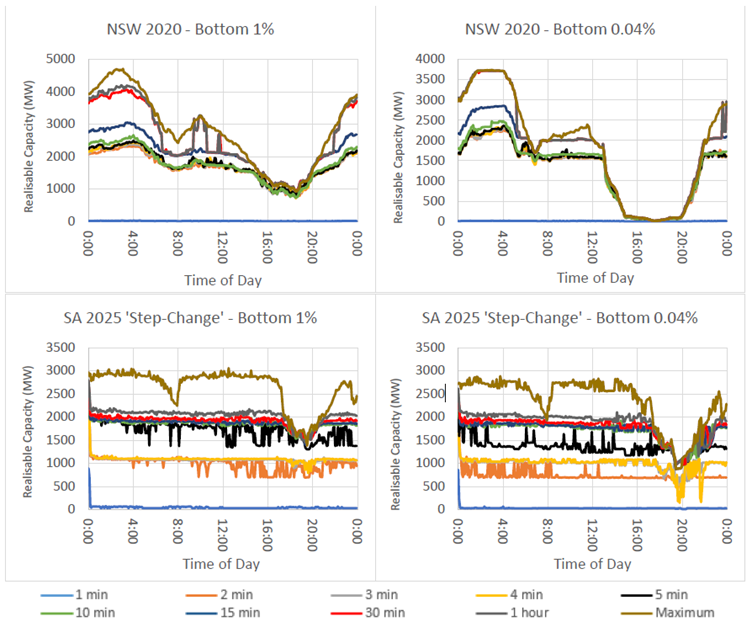 Our thoughts and takeaways

We have only scratched the surface with our analysis, but to us, these are the main takeaways and areas for further work:

We are interested in your thoughts, so please feel free to get in touch via email or leave a comment!