Tuesday 25th May 2021 was a bad day for the stakeholders involved in the Callide C4 unit in central Queensland – when it failed spectacularly (also noting the impact on 100,000s of energy consumers that were temporarily disrupted with the under frequency load shedding that resulted from the cascading series of events).

3)  And an installation that’s under a day into its operations, and also that

4)  Batteries are viewed as part of the future (not part of the past, as how coal-fired power is viewed).

1)  This was announced by the Victorian Premier on 5th November 2020.

‘The ‘Victorian Big Battery’ will operate as a virtual transmission line between November and March each year, enabling increased flows of up to 250 MW over the Victoria-New South Wales interconnector. This will alleviate unscheduled load shedding over the peak summer months.’

3)  As a result, it was installed at the Moorabool Terminal Station, near Geelong, for operations prior to the 2021-22 summer period.

Following the government’s announcement, frequent guest author here, Allan O’Neil, asked the question ‘Victoria’s big battery – what exactly is it for?’ … but on the AEC website and not here.

Two days ago (on Wednesday 28th July) at 16:22 Neoen tweeted the following to mark the successful Registration of the battery after a construction period of just over 200 days: 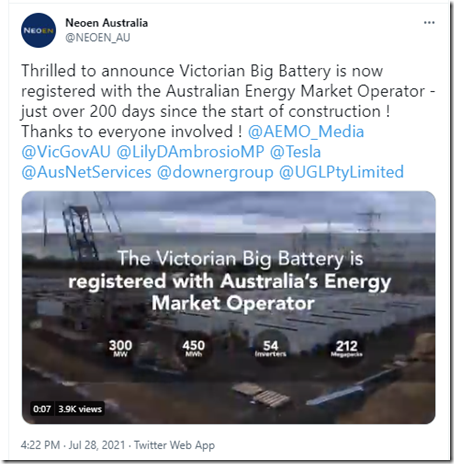 The day before this, Giles had written about ‘Australia’s biggest battery registered, but battery storage supply crunch looms’ on RenewEconomy.

As far as we can tell, the story first appeared in this tweet from 7 News Melbourne at 12:19 this afternoon, which quickly did the rounds: 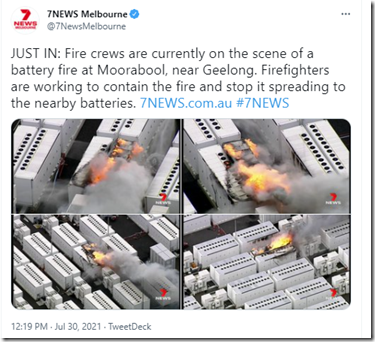 Here’s that image captured within the NEMreview trend included in my earlier article this afternoon: 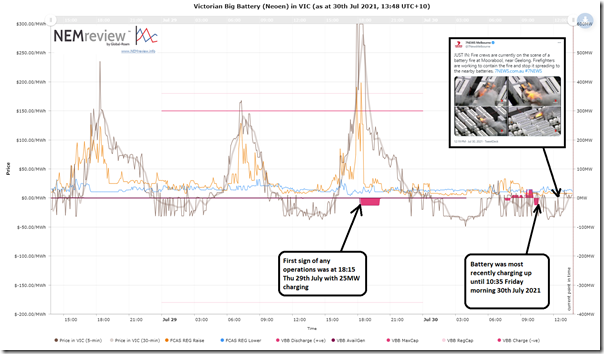 I’m not sure when it was published, but we did find this ‘Large battery fire in Moorabool’ published by Fire and Rescue Victoria.

At 15:38 the ‘Emergency VIC’ app was noting that there were 20 vehicles attending, and that the fire was fire was not yet under control (over 5 hours after it started).

1)  It did raise questions about what the state of the ~$300M project would be at the end of it all … but my understanding is that the fire might have been contained to a small number of modules.

2)  Thankfully, also, that there were no injuries reported. 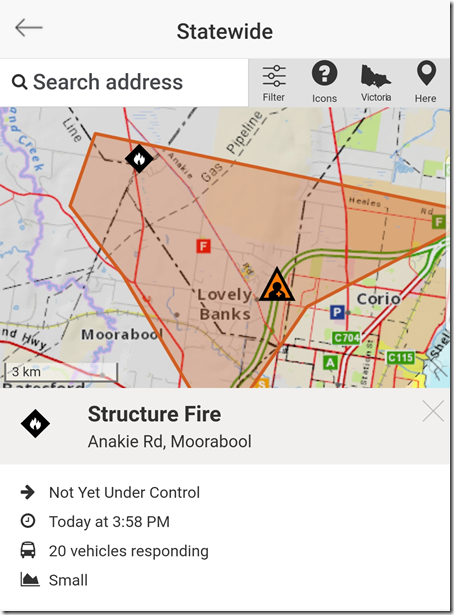 There was also this earlier warning about poor air quality published at 12:53: 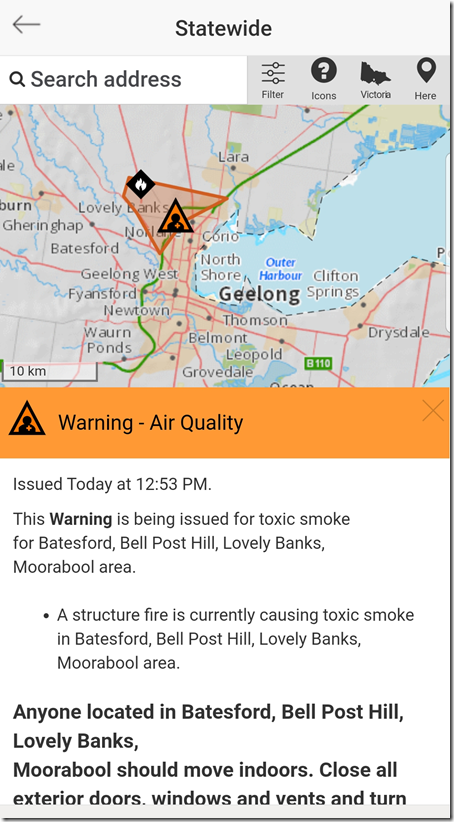 We’ve subsequently seen a number of other pieces of insight and commentary, including the following (which will almost certainly not be in chronological order!):

1)  Of course there was our earlier short note here … which was itself referenced in a number of articles below.

6)  Internationally, it made the news at CNBC with Lora Kolodny writing ‘Tesla Megapack caught fire at Victorian Big Battery site in Australia’.  Interestingly, this article says:

“A fire occurred within a Tesla Megapack at one of the largest batteries in the world in Australia’s Victoria state around 10:15 a.m. local time on Friday, CNBC has confirmed.”

… so this would have been before the unit ceased charging (between 10:30 and 10:35) – assuming both the SCADA data timestamps, and CNBC’s understanding, are both correct!

7)  In the SMH, Nick Toscano wrote about ‘Fire breaks out at Tesla Big Battery – toxic smoke warning issued’. – and in this article includes the following:

“We can confirm that during initial testing today at approximately 10-10.15am a fire occurred within one of the Tesla Megapacks at the Victorian Big Battery,” Neoen Australia managing director Louis de Sambucy said. “No one was injured and the site has been evacuated.”

Neoen and Tesla are working with emergency services to manage the situation.

8)  It was published in The Economic Times for India as ‘Fire breaks out in Tesla Megapack unit in Australia during testing’.

9)  It was noted on the ABC  in ‘Crews battle Tesla battery fire at Moorabool, near Geelong’ at about 15:00.

Of interest in this article was the 1.5 minute video clip of the CFA person explaining how the process was just to let the fire burn itself out in the module(s?) that were ablaze.

A few quick thoughts for the day… with (I would hope) more considered thoughts to come later.

(C1)  ‘Ding, Ding!’ starts the next round of the blind boxing bout in ‘Ideology Land’ …

Like old blind boxers in a boxing match that seems to last forever, this latest event seems likely to ring the bell for the next round of ideologically-driven shouting between people at both extremes of the Emotion-o-meter (who we labelled ages ago as villains number 3).

With the most recent round having been kicked off with the Callide C4 Catastrophe (which spurred many comments of the ‘coal fail’ variety – some reasonable, but some quite weird and wacky), this latest industrial incident is sure to spur some quick fire response from those sitting towards the other extreme of the Emotion-o-meter (including those who see batteries as no more than ‘big bananas’).

Back in the real world, there will be real questions asked … just as they should be (just as they are – and should be – after what happened with Callide C4):

There are known risks* related with lithium batteries – so I do wonder about the extent to which these have contributed?

* Some readers will remember we invested a non-trivial amount of time in developing a first version of an ‘Energy Storage Register’ with the Smart Energy Council some years ago because of the risk relating to thermal runaway, fire/explosion and noxious gases:
(a)  As part of this process ‘Battery Finder’ was developed as a widget, as noted here on 3rd October 2016.
(b)  Here’s an update I found on LinkedIn from April 2017 (our old website at www.BatteryStorage.info was retired some time ago)
(c)  But note our focus there was more in terms of residential batteries.
(d)  The need for what we were developing was supplanted by the anointment of AEMO to develop their Distributed Energy Resource Register

Of course there is the obvious ‘why did this particular event happen?’ question … but there are also other questions like…

(C2b)  What happens afterwards – and return to service

It was only earlier this week that Callide C3 returned to service … more than 8 weeks after the failure of its twin unit at C4.  My (albeit vague) understanding is that part of the reason for the delay was some commonality of systems between the two units, and the need for the repair crew to have ‘carte blanche’ access to C4 to be able to get it back by December 2022.

Hence, recent experience prompts the question about whether there are similar co-dependencies on a site like the Victoria Big Battery?!

Does what has happened today change any thinking about layout within a battery site (e.g. fire containment -> if what we understand is correct, then it seems that what has been installed here was sufficient) … or where a battery site should be positioned in its broader environment?

For instance – it’s uncannily topical that the AEMO this week has advertised their 12th August forum on changes to Regulation FCAS services … which (my guess) will be related to a ‘don’t procure all your eggs from one basket’ concern with batteries this size that might be able to supply the whole of the FCAS requirement NEM-wide. 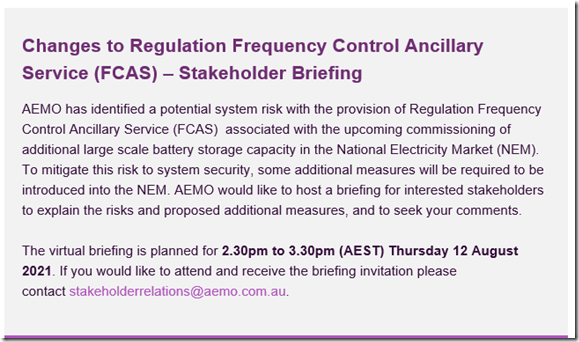 An obvious thought bubble exercise to wonder what would have happened had the battery been fully operational and in that situation when something like this happened?

Considering how the nature of HILP events are changing is one of the aspects of this energy transition we’re grappling with as part of our compilation of GenInsights21 – and this event today is just one reminder of the broader issue.

We’ll have to wait till the sun rises, no doubt, to see what damage has been ultimately caused by the event.

Despite how much Elon Musk might like being the ultimate showman, I can’t see today’s dramas fitting into his company’s publicity, and business development plans!

Some quick thoughts, spurred by Simon Hackett’s comment in relation to the fire at the Victorian Big Battery

2 Comments on "Not a great start to operations at Victoria’s new ‘Big Battery’! (part 2)"