As the sun was setting on an eventful weekend (at least for South Australians), I was reading what Kieran Donoghue had written for Boardroom Energy earlier today in which Kieran starts by noting:

“Observers of Australia’s National Electricity Market (NEM) would be forgiven for thinking the era of high prices has left us for the time being (at least until the next coal plant closes…).”

…  whilst, at the same time my audible alerts were triggering to let me know of this dispatch price spike to $15,000/MWh in the 18:35 dispatch interval for the QLD region, as captured in the NEMwatch v10 dashboard: 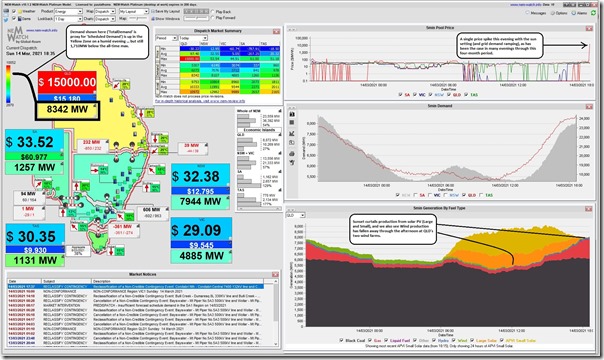 Coincidences have a funny way of occurring like that!

In Kieran’s article he highlights how unusual Friday evening’s sustained volatility was, after a pretty uneventful summer by recent standards.  That’s certainly the case!

However readers should not over-extend and draw the wrong conclusions, though:

1)   It would be incorrect to think that there had been no price volatility through summer.

2)  Indeed, price spikes in QLD around this time has become quite common – as can be seen in this trend of peak daily dispatch price in QLD from NEMreview v7: 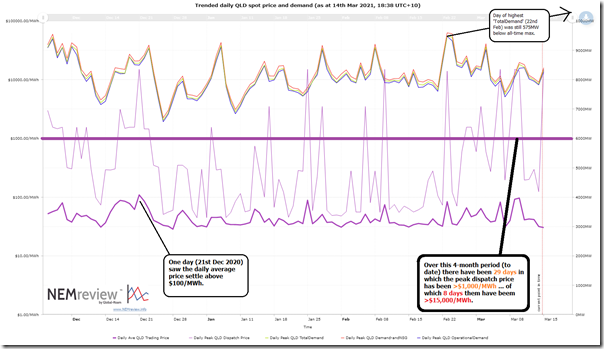 As noted on the trend, through the three-and-a-half month period since the start of summer 2020-21:

I would expect that this is also a pattern of prices we will start seeing more of, in addition to the rapid increase of daytime negative prices:

2)  because of increased uncertainty about exactly what the level of demand will be; and

3)  because dispatchable generation will be hungry to to find any opportunity to ‘make back’ some of their ‘lost revenue’ through the middle of the day.