Last week (Thu 4th February 2021) AGL Energy announced a large ($2.6 billion) impairment due to several contributing factors, including $1.9b for legacy wind farm off-take arrangements.   That same-day article on WattClarity picked out a few pieces of information from NEMreview and our GSD2020 to highlight some of the contributing factors.

There was also plenty of media coverage that followed immediately, some of which was tagged in here for ease of reference.

Yesterday (Thursday 11th January) AGL expanded on the above in presenting its F21 half-year results: 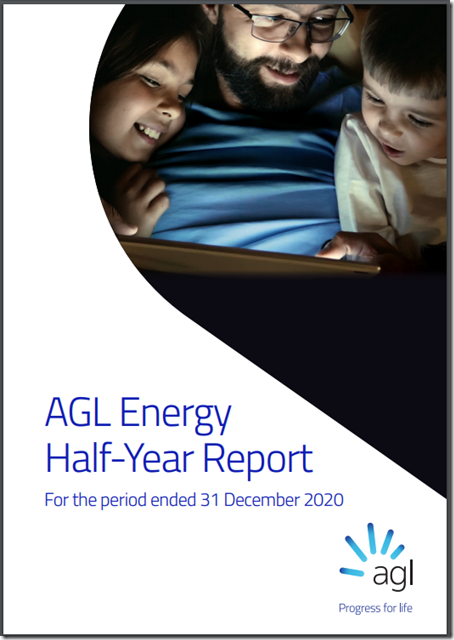 Here’s the presentation (with speakers notes), and the ASX and Media Release, and  the 57-page Half-Year Report.

(B)  Media coverage about this

As was the case last week, there has been plenty of media coverage spawned from the company results.  What follows are some of the things I have seen in the mainstream media:

In the Australian Financial Review on Thursday morning, Angela Macdonald-Smith wrote ‘AGL to slash capex, costs after $2.3b first-half loss’ and then in the evening wrote ‘AGL stokes demerger talks after huge loss’.

In the SMH, Emma Koehn wrote ‘Conditions ‘remain challenging’ as AGL swings to $2.3b loss’.

… but these articles followed others that had continued to filter through from last week (including about environmental performance).  A fuller list is tagged in our Asset Catalog, for those who have access.

Also understandably there has also been commentary on social media:

For instance, I noticed that David Leitch picked out this comment from the presentation:

“In the case of sustaining capex, the reduction is driven by major planned outage deferrals“

… and that others had noted that AGL expects no reliability impacts of outage deferrals.  Will be interesting to watch this space!

(C)  Questions that could be explored?

I don’t have time to delve at this point, but just flag that there are a few avenues that could be explored further:

In some of the articles linked above, the discussion has turned to possible demerger (and this was discussed earlier as well, such as on 20th Nov 2020 by David Leitch).    Perhaps it was just me reading quickly, but it did not seem that there was even a consistent line of thinking between all those external prognosticators about what should unfold.  For instance, there seem to be at least two options being discussed:

(and, added to the mix, are some Telco aspirations) … so expect more to come on this.

Let’s focus on the generation side of the equation – which is where we have more data (and what is the specific focus of the recently released Generator Statistical Digest 2020  for instance).  On the generation side, there are several avenues of analysis that could be explored.

In my quick read of the coverage pertaining to AGL this week, the coverage seemed to focus mostly on the pain being caused by the legacy thermal (mostly coal) assets – Bayswater, Liddell and Loy Yang A power stations.  That’s a shift from the coverage last week.

With respect to these thermal assets, there are three obvious questions that jump out at me that could be explored further:

Coincidentally today, guest author Nick Bartels used the GSD2020 and (by comparing with the earlier GSD2019) to assess how operational patterns are changing for some thermal assets in QLD and SA that used to be known as ‘base load’ assets.  These were not AGL assets.

It would be pretty easy to do the same type of thing for AGL assets, in particular, to see how their operating patterns are changing.

With notice being given that outages might be deferred (it’s not the first time this has happened – the 3-into-2 merger in 2011 for QLD Gencos in 2011 enabled outage deferral (and in some cases mothballing as well) in response to an oversupply of capacity.    There are several articles speaking to the flow-on concerns on WattClarity (including this note on 16th Sept 2014 that incidentally linked to AGL discussions at that time) – specifically:

Step 2 = asset performance (and specifically availability) suffers as a result

Step 3 = from a system-wide perspective, Security of Supply then suffers … remembering how Probability and Consequence both combine to determine Risk.

In the GRC2018 (released nearly 2 years ago now) we explored various aspects of what the data actually demonstrated about the ‘dependability’ of the 48 remaining coal units across QLD, NSW and VIC to the 31st December 2018:

1)  This was done in Theme 8 within Part 2, and then with longer discussion in Part 4 of the 180-page analytical component of the GRC2018.

2)  Amongst the discussion, we invested considerable time in exploring the Availability/Unavailability performance of all 48 x coal units – some of which was posted (June 2019) as this short excerpt of the 17-year aggregated coal unavailability – aggregate results that surprised some readers.

3)  There are obviously questions that could be explored further, should we have time to revisit the analysis we did in 2021 and publish a GRC2020, including

(a)  Understanding what’s changed in aggregate, two years on (we’d flagged some questions about late 2018 stats and wondered whether they would persist),

(b)  getting to the bottom of some differences apparent between regions (a question for NSW here – where AGL have 8 units),

In this case, however, there are questions about whether (and how) the supply/demand balance might ever recover … if not for closure of coal.

The coverage on thermal assets this week was in contrast to what followed last week in the light of the $1.9 billion hole announced in relation to earlier procurement of energy from Wind Farms and Solar Farms.  Last weeks’ article showed how the GSD2020 could be used to understand how the impairment has come about, and how newer projects have commercial operations have some key differences.

However there’s much more to this line of thinking that could be explored … particularly as there has more recently been a rise in the establishment of Renewable PPAs signed directly between the generators and Large Energy Users (something we’re looking to help more with in the ‘deSide 2021’ upgrade).

Don’t have time to actually explore today, but the above might be a segue into something later …