Also making news this week was a large write-down in asset value for Origin Energy.

(A)  Origin Energy presentation and report

This media release notes that this includes $1,578M impairment for the Energy Markets division … which itself is split further into both:

’impairment for its generation assets of $583 million post-tax, with the lower outlook for wholesale electricity prices driven by new supply expected to come online, including both renewable and dispatchable capacity, impacting the valuation of the generation fleet, particularly Eraring Power Station.’

The statement does not provide a specific write-down for Eraring – but the ‘particularly Eraring’ statement implies that it’s at least 51% of the $583M (and probably a higher percentage than that).

In a later article we might look specifically at Eraring Power Station with reference to the 10-year history for each of the 4 units published to 31st December 2020 in the Generator Statistical Digest 2020 (released at the start of this year) ….

… but that’s not actually the main focus of Origin’s announcement (though you might not have understood that based on how it’s being discussed elsewhere)!

‘An expected impairment to goodwill of $995 million post-tax primarily relates to lower electricity prices impacting margins on long-term renewable power purchase agreements, as well as lower near-term gas earnings, neither of which have specific assets carried on the balance sheet.’

Again, there is no break-down between renewables and gas – though it is noted that the renewable PPAs are mentioned first (does this imply a higher proportion of the $995M impairment on renewable PPAs than on the gas purchases?)

In addition to the headline media release, there was also this media release about the Quarterly Report June 2021: 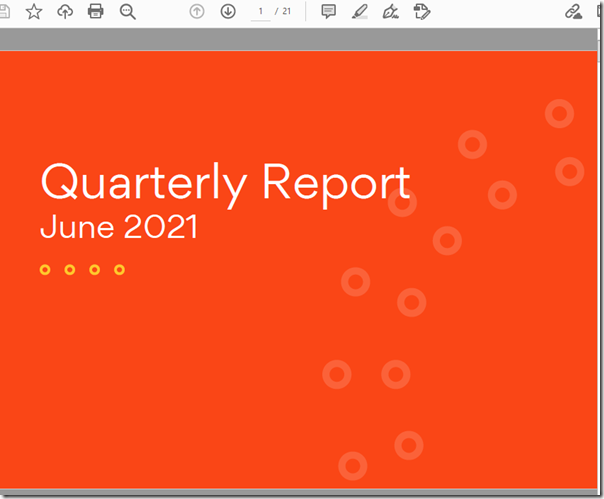 In a very brief scan this evening, nothing jumped out at me in this report that might illuminate the impairment more specifically – so I guess we’ll have to wait for the publication of the full-year results…

(B)  Readers should be careful in how its written up in the media … and especially on social media!

No surprise, really, that ‘coal’ featured heavily in the Ben Butler’s article in the Guardian on Friday 30th July – ‘Origin Energy slashes value of Australia’s biggest coal-fired plant due to impact of cheap renewables’.

Thankfully, RenewEconomy mentioned three in a trifecta (coal, gas and renewables) in Giles Parkinson’s article – ‘Origin takes massive hit on coal and gas generators and renewable contracts’ … but unfortunately what follows is likely to be interpreted by some readers, who will see what they want to see, when it says in the 3rd paragraph:

‘The biggest hit, however, is on the Eraring coal fired power station in NSW, which at 2.8GW is the biggest in the country. Eraring accounts for the bulk of the $583 million post-tax write-down of generation assets.’

Note that this is certainly correct (and also follows the order set out in Origin’s Media Release) – but some I suspect it won’t register with some readers that the bigger number is revealed in the 7th and 8th paragraphs:

‘But these contracts are also out of the money, because of the significant fall in wholesale prices and the value of large scale renewable energy certificates.

Origin says it will write $995 million off the value of goodwill to these contracts, a sum that also includes the value of gas contracts which are also out of the money.’

In the AFR on Friday, Angela Macdonald-Smith wrote an article with a title that mentioned no fuel types in ‘Origin shocks market with profit warning and writedowns’.  Further into the article, Angela notes:

‘Impairment charges of $1.578 billion on Origin’s energy markets and generation assets accounted for the bulk of the hefty charges, with almost $1 billion written off goodwill in energy markets, mostly due to out-of-the-money renewable power purchase contracts, which also hit AGL earlier in the year.

Another $583 million of value was slashed from the generation business, centred around Origin’s huge Eraring coal fired generator in NSW but affecting power plants across the board, including gas plants and the Shoalhaven pumped hydro plant.’

… but if ‘most’ of the $993M impairment was due to out-of-the-money renewable PPAs, it’s still not clear how much was due to gas purchase contracts that are also out of the money?

In the Australian on Friday, Lachlan Moffet Gray and Nick Evans wrote about how ‘Origin Energy flags $2.25bn hit as power prices tumble’ (also a title that mentions no fuel type).

It’s not just the words readers need to be careful in interpreting, however – it’s also the pictures.

For instance (and this is not the only example) in illustrating Nick Toscano’s article ‘Origin Energy takes a $2.2b hit as green shift hurts, coal costs bite’ in the SMH on Friday, the choice of photo was – you guessed it! – Eraring Power Station: 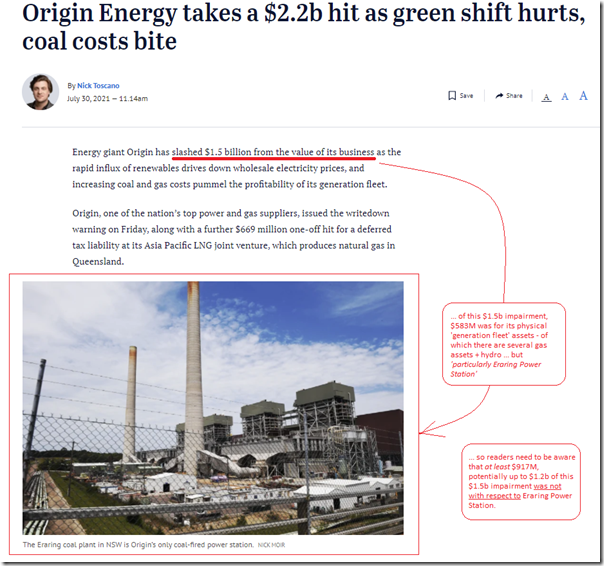 It’s no surprise to me in observing much of the commentary on social media about this impairment seem to have a disproportionate focus on Eraring, and too little on the other areas of the impairment that seem to have a higher cost (including the green ones!).

In essence this does not seem too different to what happened with the massive $2.6b write-down seen at AGL Energy on 4th February 2021.

It’s not just about ‘the end of coal’, despite the fact that some want to see things through a simplistic lens.

… with it later noted that:

‘The provisions for onerous contracts of $1,920 million (pre-tax) relate primarily to long-term wind offtake agreements which AGL entered into between 2006 and 2012 to support the development of the renewables sector at that time. These offtake agreements were entered at prices significantly higher than spot and forecast prices for electricity and renewable energy certificates today. ’

I’m not saying that the AGL thermal business did not also suffer impairment – but the fuller and more complex view seemed to escape most of the commentary at the time in relation to AGL Energy (and, indeed, even in terms of its de-merger plans, with the poorly performing wind farm PPAs also slated to be shunted into ‘Lots of Problems co’ with the coal assets).

(D)  The road ahead to increased renewable penetration is not smooth…

As we are seeing, navigating this energy transition is tricky … with impairments this year hurting both AGL Energy and Origin Energy at this point more because of the PPAs signed with wind farms (and, to a lesser extent, solar farms) than due to legacy coal assets.

That’s just a sign of the rocky road ahead.

What happens in future to the renewable PPAs signed by others (i.e. initiated in more recent years than these ones that have come back to bite AGL and Origin) … will they also see the same fate?  I’m specifically wondering about:

2)  Renewable PPAs signed with Corporates (which have more recently been in vogue).

Furthermore, if the ones who are taking on the risks of these projects are feeling the pain of the oversupply in the pump-primed market, what does that do to the ongoing quest to de-risk new projects for developers such that they can build more and more projects for the future?

As I have wondered before, have we been killing new entrants with kindness?

A couple glimmers of hope spotted recently, that there might be some (belated) awareness that the current methods of support for ‘anytime/anywhere energy’ are not scalable, or sustainable.

1 Comment on "$1.5b write-down in value of assets at Origin Energy"