It’s proving increasingly difficult to keep up with all of the various market reform initiatives running out of the AEMC, or the ESB and various other venues of this kind of thing.

One I did notice, and is worth noting, is this Rule Change request submitted by Alinta Energy to the AEMC on 1st July 2022 proposing that the Administered Price Cap should be lifted from its current level ($300/MWh) to a higher level (proposed $600/MWh) temporarily to reflect the higher short-run marginal cost currently faced by a number of generators: 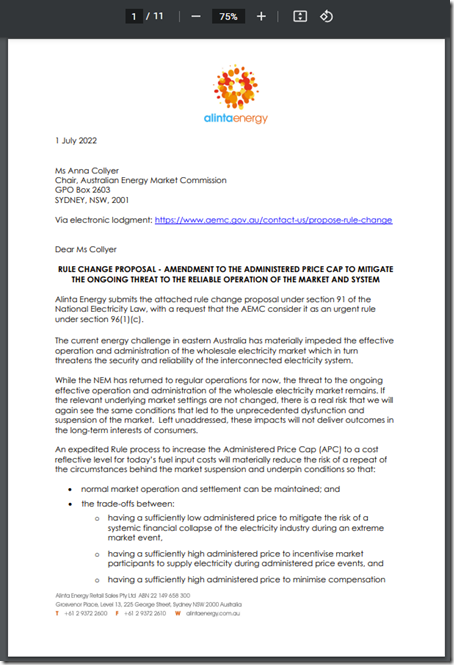 ‘The attached Rule change request proposes to … increase the APC from $300/MWh to $600/MWh in every NEM region, with a sunset period of 12 months (or a suitable period as determined by the AEMC with consideration of other processes underway, such as the 2022 Reliability Standard and Settings Review). ’

Further information about this Rule Change request will be progressively posted on the AEMC website under ERC0347 here.

Relevant to this consideration are these two different theories of why capacity was withdrawn from the NEMDE dispatch (and pricing) process after Administered Pricing was imposed following CPT.

Readers here might note that this Rule Change proposition has been discussed elsewhere, including:

1)  On 5th July on RenewEconomy with ‘Alinta calls for urgent doubling of electricity price cap, as fossil fuel costs soar’.

2)  On 6th July in the AFR Jennifer Hewett made mention of it in ‘Nasty energy bill shock awaits companies that thought that they escaped’…. and Angela Macdonald-Smith & Mark Ludlow also mentioned it earlier in ‘Queensland at core of renewed power grid threat’.

This is one we (amongst many) will keep an eye on…

Someone asked me a question on social media this morning about batteries ‘withdrawing capacity’ … here’s a view of what’s happened using ez2view (and as presented to EUAA).

Price volatility in the QLD region rose to another level on Thursday morning, 9th June 2022

Available Generation in QLD has been quite the see-saw following the imposition of Administered Pricing on Sunday evening, 12th June 2022. This is the 3rd occasion this evening we see ‘Actual LOR2’ warning.