One other aspect of the ‘catching up’ process noted earlier is also working through what’s happening in terms of market reform – with one of the reforms of particular interest to us being the AEMC’s Rule Change on Integrating Energy Storage Systems (IESS) into the NEM.  We noted on the day (Thu 2nd December) that the AEMC published its Final Determination – but wondered at the time how this would be implemented in practice.

We noticed that (on 15th December 2021 – same day we released GenInsights21) the AEMO published this High-Level Design for how they will implement what the AEMC has determined: 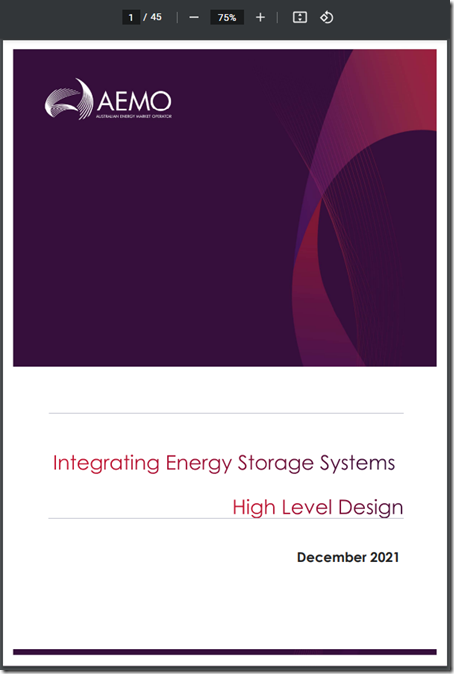 On the principle of starting from the delivery dates and working backwards to understand what we’ll need to do in ez2view and other software, there are two dates that jump out for me on p4/45 in the document:

Implementation of the changes under the IESS Rule will be delivered through a baseline and a final release.

31st March 2023: delivery of a ‘baseline’ release containing new registration and dispatch models. This release will give effect to any transitional rules.

3rd June 2024: delivery of a ‘final’ release containing the full implementation of the IESS rule change. AEMO estimates that 30 months is required for full implementation, including a market trial for a period of four months prior to go-live.

The majority of changes made by the final rule will come into effect on 3 June 2024. There are two changes that will come in earlier on 31 March 2023:

• Allowing hybrid systems to use aggregate dispatch conformance. While the IRP category will not be available until June 2024, participants will still be able to register hybrid systems in the existing categories, for example as generators and market customers, and classify their units under the existing framework.

There’s further information on the AEMO website here, and in particular they note that:

AEMO welcomes stakeholder feedback on the proposed arrangements for the implementation of the IESS rule change. Feedback can be provided by email to StakeholderRelations@aemo.com.au by Friday 11 February.

One job for us in 2022 will be to make sense of how to reflect these changes in our software – including in relation to the 20 bid price bands for storage (negative MW quantities for consumption), and processes surrounding hybrids.

This morning the AEMC has published its final rule focused on clarifying how Semi-Scheduled generators should follow dispatch targets – including in dispatch intervals where prices are negative, and some had been unexpectedly switching off.