We release ez2view v9.1 for Five Minute Settlement a couple weeks ago and are now progressing with the development of what will be a v9.3 release (soon) for the Wholesale Demand Response Mechanism … taking into account Tripwire #3.

In playing with the current (i.e another new one – v9.2.1.23) interim build I thought I’d have a quick look at two ‘before’ and ‘after’ cases, to see if there are easily visible changes in bidding patterns under this new pricing regime…

Here’s a snapshot from ez2view of the ‘Bids & Offers’ widget spanning the past 30 days, and filtered down just to Queensland coal generators: 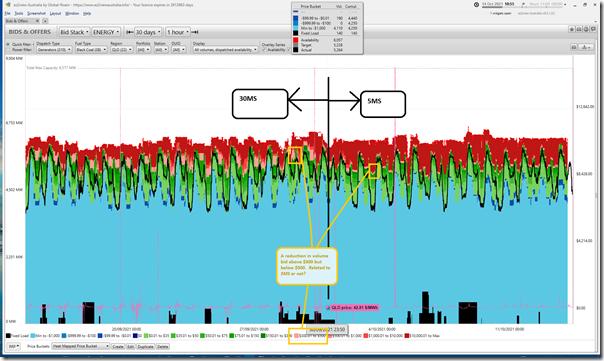 Remembering that there are four broad colours used in the ‘bid ranges’ and starting from bottom to top:

2)  Looking at the BLUE bid ranges (i.e. volume bid at $0/MWh at the RRN … all the way down to the Market Price Floor of –$1,000/MWh) it is difficult to see any real difference in this helicopter aggregated view.

Remember how Allan previously explained ‘how do contracts affect bidding behaviour?’ … in other words, some reasons why coal generators might bid volumes down at -$1,000/MWh.

3)  The GREEN range is quite small (as discussed previously in the GRC2018 in terms of ‘Risk is Escalating’ … which is something we have explored further in GenInsights21).  But it’s difficult to see any macro changes jumping out at this helicopter level.

However whether this is due to the change to Five Minute Settlement, or whether due to other factors (e.g. it’s a new quarter, and hedge cover sold by the generators will probably have changed) can’t be ascertained.

(A2)  Bids aggregated for VIC wind and solar generators

Preparing a more complex ‘Power Filter’ to aggregate together bids for only Wind and Solar (i.e. Semi-Scheduled) plant in Victoria, we see this trend over the same 30-day history: 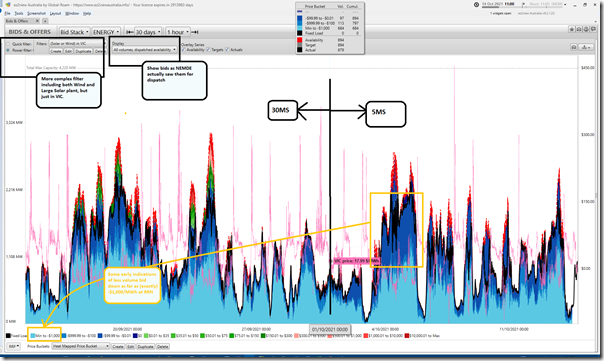 In this chart I have highlighted how it appears that a higher volume of energy-constrained volume from these Wind and Solar plant was offered to the market above the MPF of –$1,000/MWh … though still below $0/MWh.  It seems logical that this has been a natural response to the move to Five Minute Settlement.

We’ll watch with interest to see what continues to unfold…

(B)  Deeper Analysis to come…

I noted on Monday how a deeper analysis will be prepared and included in GenInsights21 as an ‘Early insights from the operation of Five Minute Settlement’ appendix.  Those able to attend the Australian Institute of Energy event being organised for Thursday 2nd December 2021 will also be able to discuss some of those insights with me.

2 Comments on "Perhaps some early changes with Bid Strategy, with Five Minute Settlement"