One of the readers of Monday’s earlier update on the Victoria Big Battery (~16:15)  has directed me to this later update (19:21) from Victorian Energy Minister, Lily D’Ambrosio: 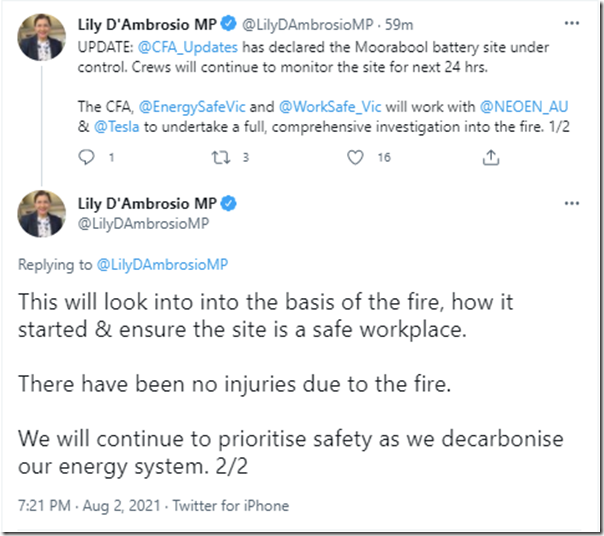 1)  The fire is now declared under control; and

2)  A ‘full, comprehensive investigation will be conducted into basis of the fire, how it started & ensure the site is a safe workplace’.

Will wait to hear more…

Also, one of our readers has noted that (at 19:07) the Guardian wrote ‘Tesla big battery fire in Victoria under control after burning more than three days’.  In the article is is noted:

‘The fire burned throughout the weekend and into a fourth day, before it was declared under control just after 3pm on Monday.

Fire crews will remain at the site for the next 24 hours “as a precaution in case of reignition” and will take temperature readings every two hours, the Country Fire Authority said.’

‘CFA incident controller Ian Beswicke said the fire had been particularly challenging due to the complex nature of the battery site.’

Not a great start to operations at Victoria’s new ‘Big Battery’! (part 2)

Following the (very brief) initial article early this afternoon, here’s some more of what we have been able to determine about today’s fire at the new Victoria Big Battery facility near Geelong VIC.

Be the first to comment on "Fire at Victoria Big Battery under control – Monday 2nd August 19:21"