This evening I noticed this tweet here about a fire in the TransGrid 330kV substation near the Tallawarra Power Station in the Illawarra region: 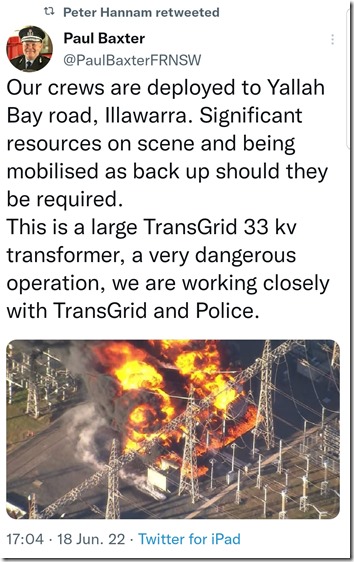 Thanks to Peter Hannam and others!

In a quick scan I noted this other tweet from Peter, and the ABC article ‘Fire engulfs part of Tallawarra Power Station in Yallah, with one transformer fully alight’.

A quick glance at this ez2view ‘Unit Dashboard’ widget shows that it’s not stopped the Tallawarra power station ramping back up to partial output.  I’ve not had time to check further*  to see if the ~2 hour outage until quite recently has anything to do with the fire … and may not be able to tell without ‘Next Day Public’ data…

*  … see PS1 below, and update on the ez2view snapshot highlighting that the short outage was the result of the fire. 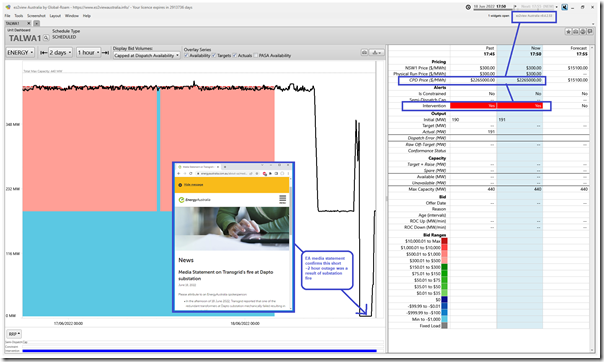 Note that newer versions of ez2view v9.4 (like v9.4.2.53 here) are now showing uncapped CPD Price (at a participant’s request) … as it better helps participants bid for dispatch under these strange market conditions.

Worth adding a few links to other updates provided by others:

(A)  Updates from the electricity industry

At 18:25, the AEMO published this tweet to reassure all ok with electricity supplies: 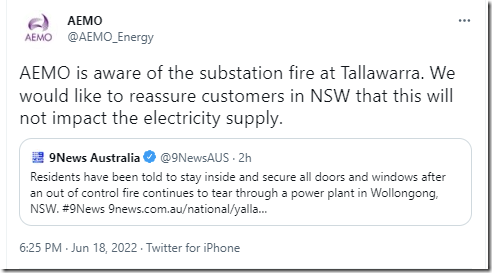 1)  The statement noted that the fire resulted in the ‘power station coming offline for around 2 hours’ … and that … ‘returned the plant to service around 17:15’… as a result of which the ez2view image above has been updated with the additional note.

2)  ‘Despite earlier media reports, there was no fire at EnergyAustralia’s Tallawarra power station today.  ’

I had a quick look, and could not see anything published by TransGrid (though the event does not seem too dramatic).

(B)  Other media coverage

In addition to the ABC article above, I’ve also seen these media articles since initial posting:

3)  Later (~22:03) we see 9News’ Romy Gilbert and Jo Attanasio write ‘Secure all doors and windows – Residents warned to stay inside as oil file tears through power station in Woollongong’ (i.e. another article mistaking the substation for the power station).

4)  Though first published ~17:00 I only saw later the Illawarra Mercury had Desiree Savage write ‘Dapto substation in Yallah Bay on Fire’ … an article that has some further updates coming in.

1)   though from the perspective of the NEM, very conscious of the risk of ‘straw that broke the camels back’ … both in terms of the physical grid but also in terms of overwork and exhaustion in the various control rooms and associated functions across the NEM

2)  More directly, though, thoughts also with the Fire and Rescue NSW people trying to put the fire out … hope everyone stays safe!

Three additional pieces of data, with respect to the (fire-affected) ‘Victorian Big Battery’

It’s Saturday evening, and here’s a look at what additional data I can see, in relation to the fire (and any after-effects) with the Victorian Big Battery.