At 10:42 this morning (Monday 2nd August) the Victorian Country Fire Authority tweeted this update, noting that the fire (whilst it had subsided) was still not yet under control: 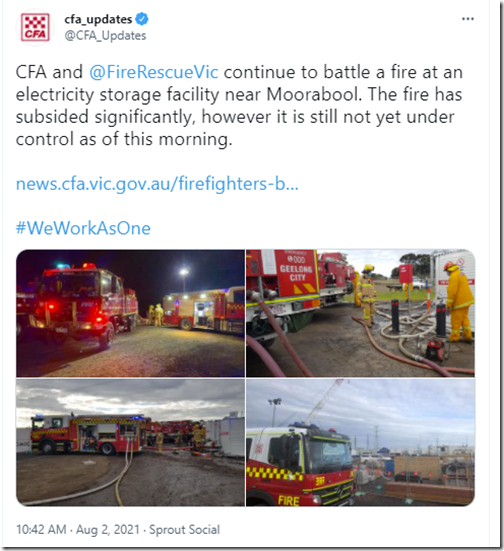 Today there have also been two sequential updates to this earlier article as follows:

“Update at 3.30pm on 1 August, 2021: The fire has subsided significantly. Crews are now doing atmospheric monitoring around the cabinet and will check to see how active the fire is internally behind each of the doors.”

This status update, and some additional information, seems to have been referenced in three media articles I have seen:

(a)  On Sunday 1st August (not sure when, but after the above) Giles Parkinson wrote ‘Tesla Megapack still burning, no word if any delays to Victoria Big Battery’ on RenewEconomy.

(b)  At 17:16 on Sunday Jessica Sier wrote how ‘Geelong Tesla Big Battery fire burns over the weekend’ in the AFR.

“Update at 09.30am on 2 August, 2021: The fire has subsided significantly but is not yet under control. Crews have remained on scene overnight and continue thermal temperature checks to see how much heat remains internally behind the doors.”

Not quite local, but I note that the news also made Bloomberg coverage at 13:57 with ‘A Tesla Big Battery in Australia Is Burning for a Fourth Day’.

I also note that the warning about the fire has disappeared from the Emergency Victoria app at the time this article is published (16:15)

Earlier today, the AEMC released a final determination on a market rule change regarding the registration and participation of storage systems in the NEM.

Coincident with the AEMC’s Final Determination yesterday (Thu 15th July) on FFR, there was also the Draft Determination published on Energy Storage Systems. Here are some (very) early thoughts…