Record spot prices put stresses on market players and pool exposed customers. It would not be surprising if a small retailer fails over the next few months, in a similar way as previous shocks. However, the laws of physics will dictate there will be an equal and opposite reaction, thereby creating big winners alongside the big losers.

Given the recent shock, we have speculated on the big winners and losers and by doing so, we also noted the behaviour of setting extreme spot prices has changed.

The owners of Callide C (CS Energy and InterGen), head the list of pained generators. They hope the insurance will cover the repair cost, and any additional Business Interruption insurance in place is probably capped and unlikely to fully recover trading losses over a sustained period.

Looking at the generation profile below, you can see that: 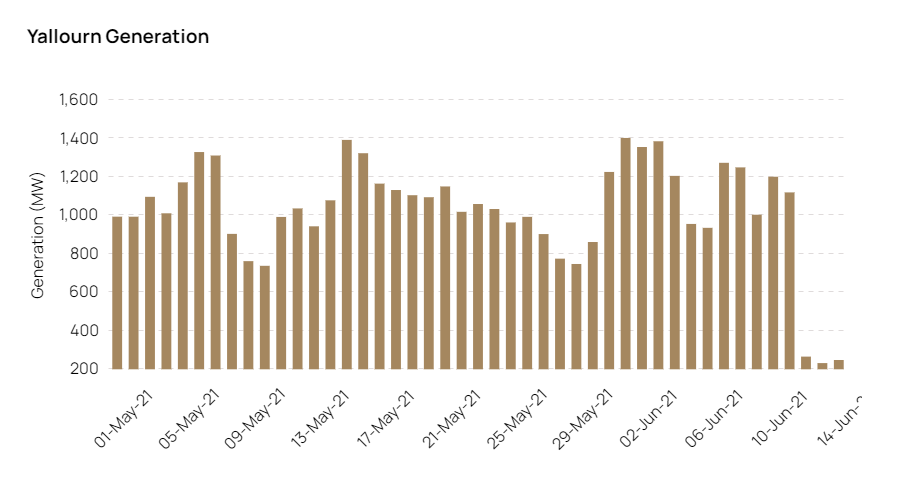 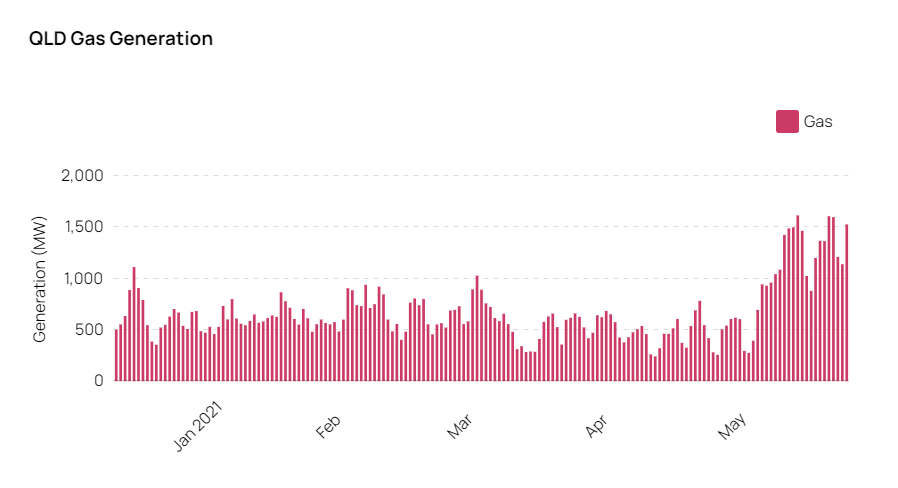 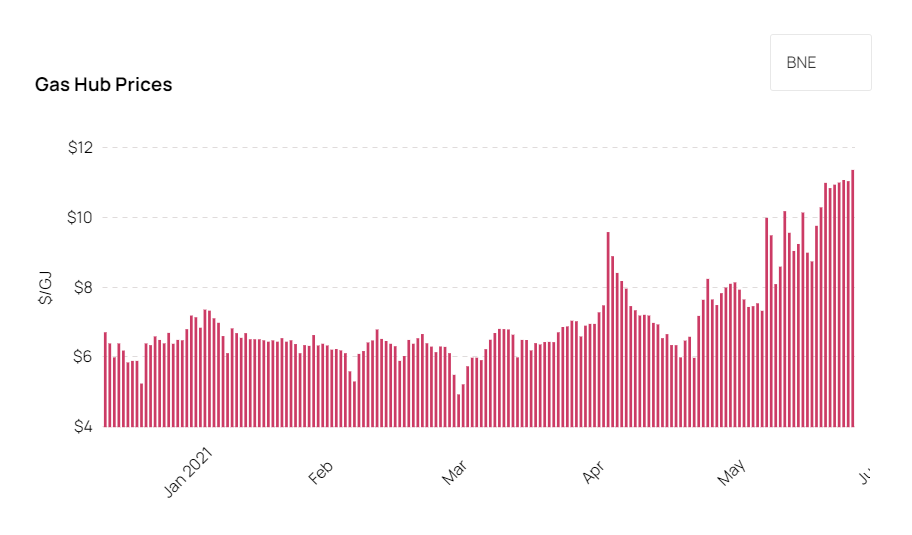 The average spot electricity prices continue to set records in Queensland and to a lesser extent NSW. The current Queensland June average is $289/MWh, well above any previous monthly average, and it must be causing stress on any player or customer holding a short trading position. Sustained extreme prices are difficult to avoid through demand management. 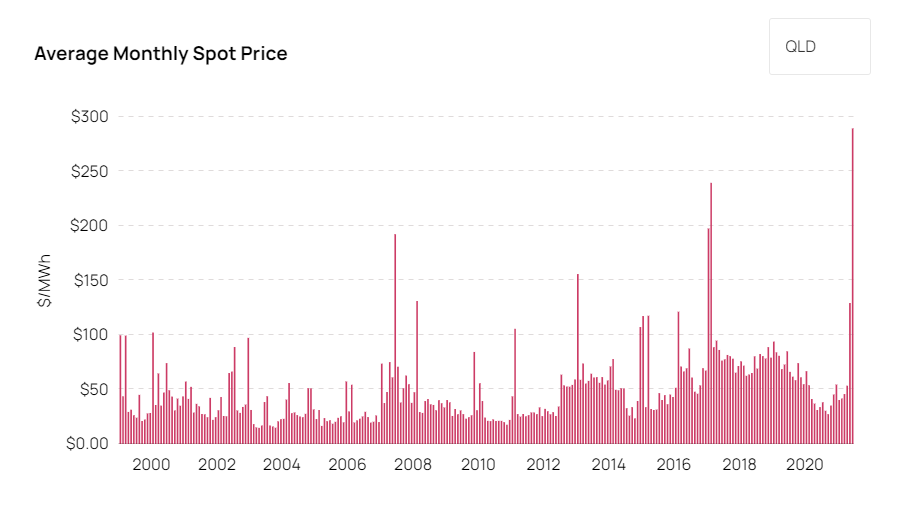 Residential Retailers offering spot market pass-through would have very stressed and fatigued customers. We believe that some of these Retailers have offered customers compensation to try to avoid customer churn, but the pull of churning away would be strong.

It is important to not forget customers. Upon the Callide Event, it was reported 470,000 customers were forcibly load shed, which then creates a perverse market financial outcome. Customers are forced to directly feel the pain and cost of the interruption, and yet their Retailer stands to benefit.

How is this so? Each customer meter is assigned to a Financially Responsible Market Participant (FRMP), in most cases a licensed Retailer. If a customer is curtailed, then their meter will read zero energy and therefore the Retailer avoids the cost of paying AEMO for the cost of energy that the customer would have consumed during the extreme prices. With the customer curtailed, the retailer will hold a smaller short trading position, or a larger long trading position. In either case, the Retailer gains by avoiding a cost, or making greater trading profit.

Risk management practices across the country are being well and truly tested. Those that are doing well with long trading positions will be smiling all the way to the bank, while those that hold short trading positions, will be stressed. Their capital structure will dictate whether they survive to tell the story, or hand back the keys.

Having a closer look at the Queensland extreme spot prices (i.e. above $300/MWh), it is interesting to note two key factors: 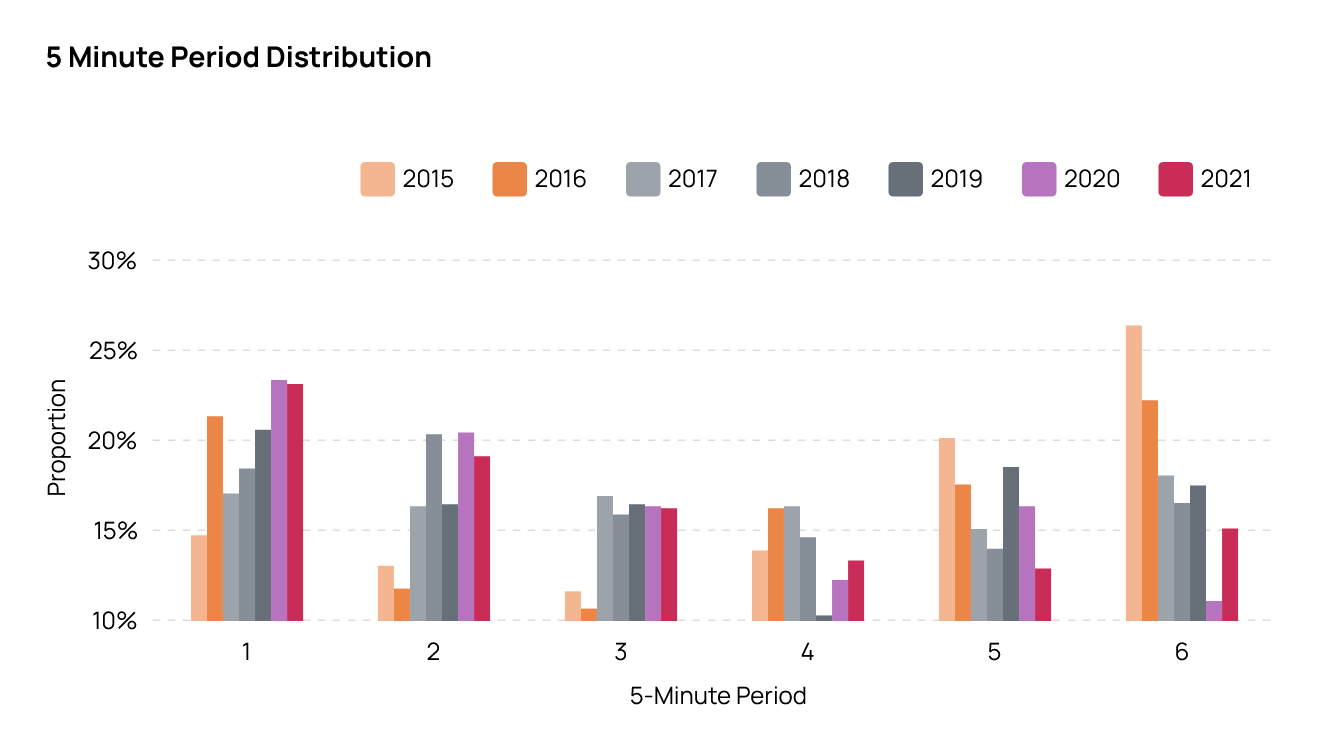 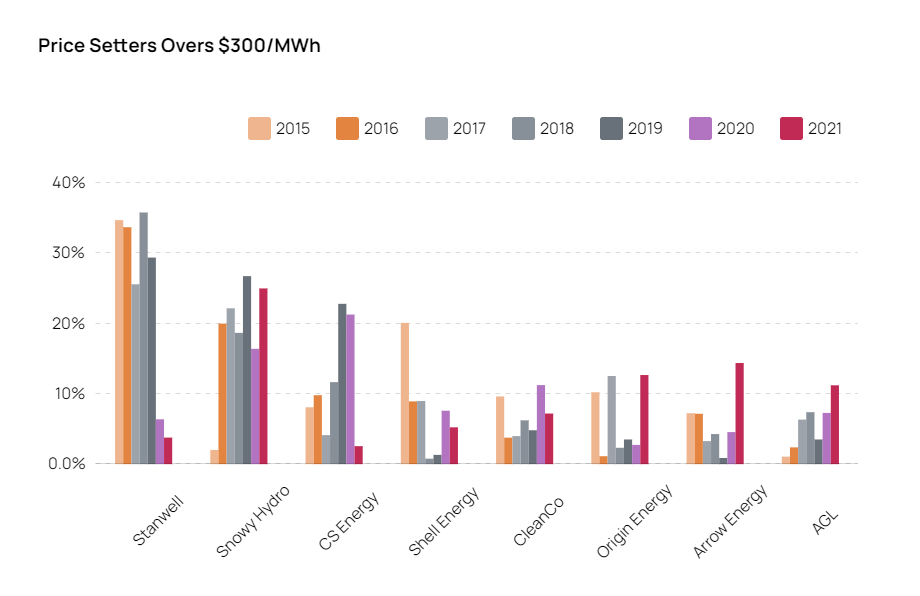 Setting extreme prices at the start of 30-minute period, means that slower ramping generators can come online during the half-hour and partially enjoy the averaging effect of the spoils. Spiking at the end of half-hour makes it more difficult for others to participate.

When 5-minute settlement becomes operational on 1 October, this dynamic will disappear.

Trading on the ASX Energy platform has been exceptional for Q2-21, Q3-21 and Q4-21 base contracts in Queensland. The chart below shows how in 2021, the traded quantities of quarters Q2, Q3 and Q4 have overtaken Q1, which is typically the highest traded contract in the market. 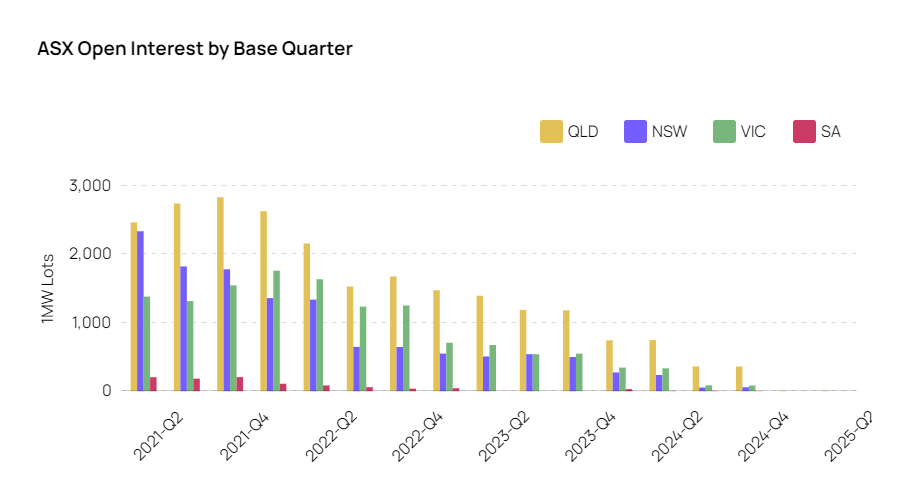 Origin Energy must be sitting back in the lounge chair holding a celebratory drink. Back in February 2021, the CEO stated that prices were too low and were “going to be a pretty messy period of time”. Well, how things have changed.

Since the start of the year the forward prices have bottomed out and since mid-summer, have rallied strongly. Aided by the news of Callide C4 is likely to be out-of-service for a year and now with the Yallourn risk, would bring a smile to Profit and Loss statements for those not in the firing-line .

The charts below show the forward market prices at the end of each month, along with current prices. The rally has been profound. 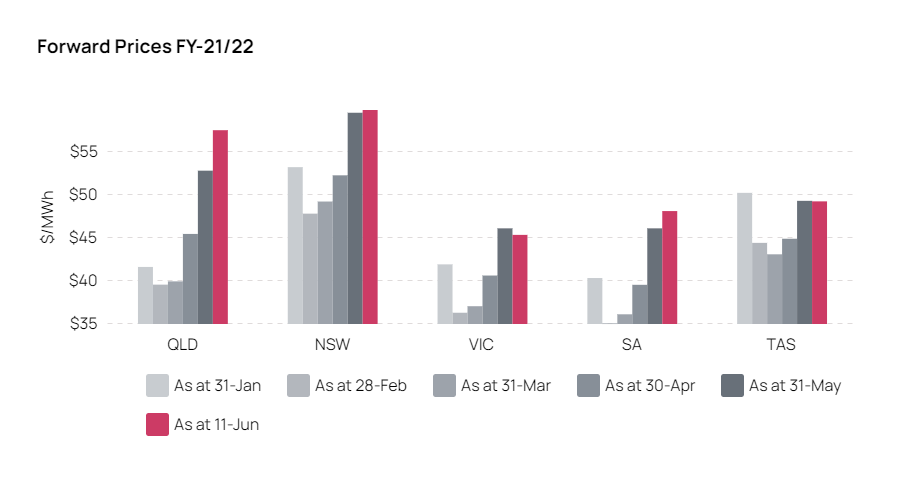 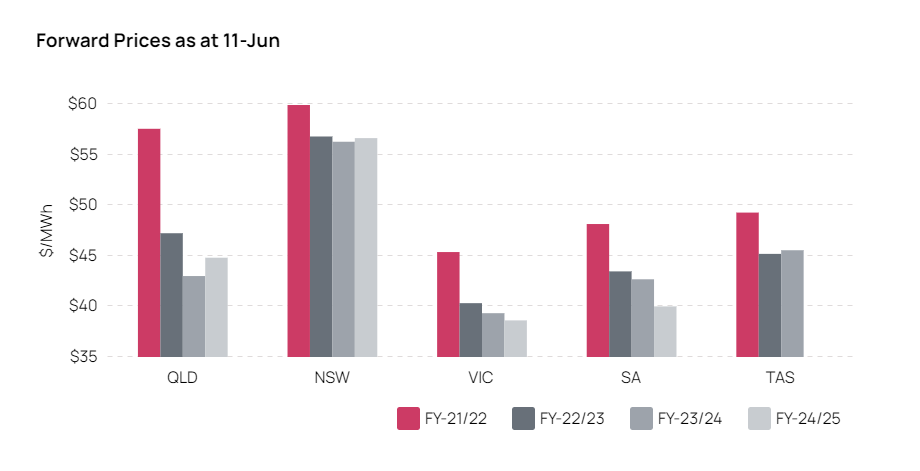 However, this market rally may have incurred a cost to Origin Energy. Watching Origin’s offers from Eraring shows they were prepared to put capacity at risk, to raise prices. This means foregoing short-term revenue for longer term value. This strategy started at the beginning of the year and has determinedly continued through April, May and now June.

Given this was a concerted and planned strategy, Origin should have been active in the market buying 2021 contracts last year to underpin the strategy and to manage the risk. Alternatively, reducing the retail book which is probably less palatable.

Consequently, it is difficult to see whether Origin has been hurt, neutral or over-joyed by the recent few months. Without doubt, the longer term has been beneficial for them (and others), driven by stronger forward prices. Whether any short-term pain was absorbed may become evident in their end of financial year reporting. 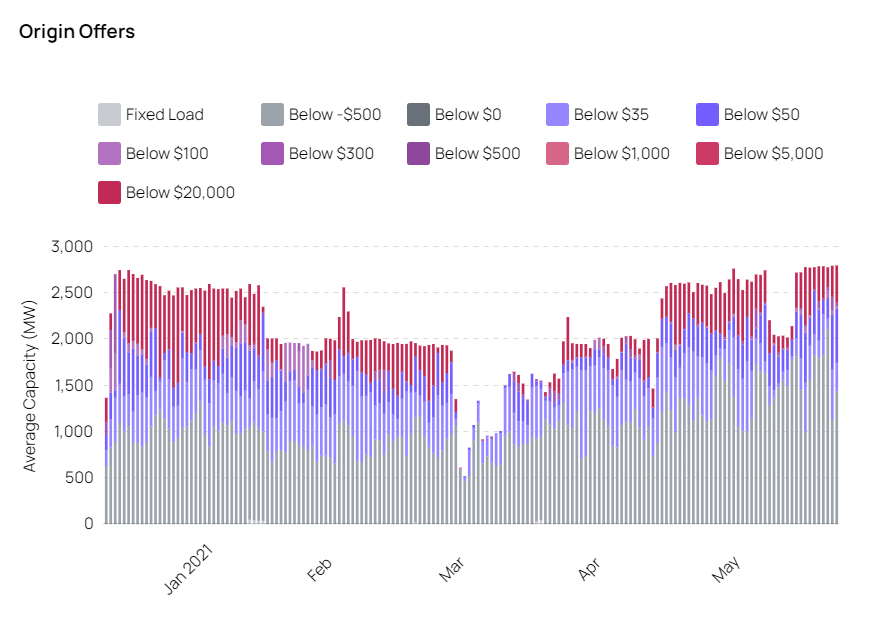 In the market’s history, price shocks cause reverberations through the industry. It has the habit of tightening up risk policies, reviewing capital structures as the recent margin calls from AEMO on Retailers would have been profound.

As we stated from the outset; shocks create winners, losers, and casualties. We do not wish ill on any business, but it does emphasise the need for good analytics, risk management practices and risk-adjusted hedging strategies, otherwise the consequences can be dire.

Guest author, Drew Donnelly at Compliance Quarter, uses the review of hedge practices in the wholesale market included in the recent ACCC report as an opportunity to reflect on what approaches they have seen in their work with new entrant retailers

Be the first to comment on "Callide C Event Fallout"