It seems like ages ago now, but Sunday 24th January 2021 was an interesting day because of a couple discrete incidents – including two that were of particular interest to me

1a)  As noted here in the first article for the day, we determined that the ‘Q>>NIL_CLWU_RGLC’ constraint equation rapidly reduced the output of many generators in QLD of varied fuel types.  The resultant drop in supply meant that prices could only go one way – up, and quickly!

1b)  What made this even more interesting was that this happened through the period where the AEMO experienced a total SCADA Failure, which will have impacted on their operations in various ways.

Incident #2)  Later the same day, there were also stresses in the SA region, as discussed in this 2nd article for the day…. however that’s not the subject of this particular article.

Since that time I have been trying to steal some time (here and there) to piece together some analysis that would help me understand how that constraint equation actually worked in the absence of any SCADA data feed, which has been a challenge (especially because of only small amounts of time here-and-there, and plenty of other distractions).   However I have been getting closer to a clearer picture!

Thankfully, the AEMO made my job easier when (on 15th February 2021) they published this ‘Preliminary Report – Total loss of SCADA systems on 24th January 2021’: 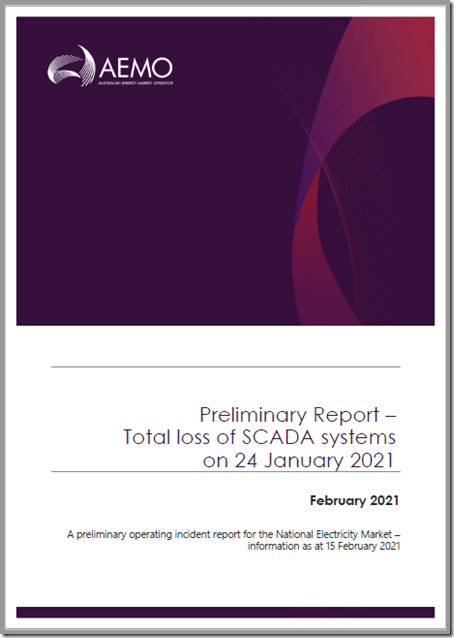 It does not directly answer my question – but it does help to clarify some of the key timings, which I have copied into the table below for ease of reference.

(A)  Sequence of Events

With the benefit of this report, and a few other things published by AEMO, my understanding of the sequence of events is as follows:

I’ve been using the above to try to piece together what happened, in particular, with the ‘Q>>NIL_CLWU_RGLC’ constraint equation on the day.

In order to understand what’s happened, we have extracted some of the AEMO’s 4-second data that we have been accumulating for some time now…. however even that is delivering some further questions…

In the following chart, we plotted the number of seconds between consecutive timestamps through the period of the afternoon that’s of interest: 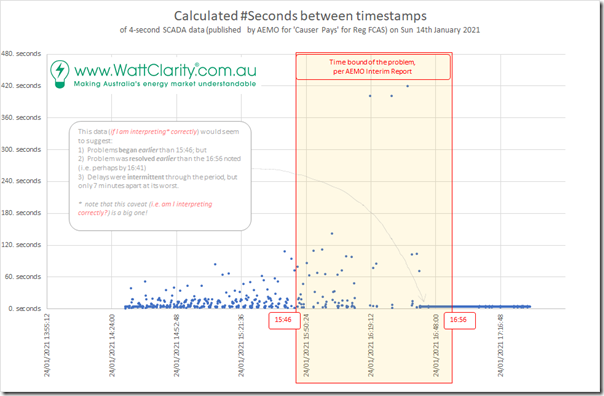 So long as I have interpreted this correctly (and that’s a big caveat!) it would appear that:

3)  Between start and end the problem appears to be intermittent:

(a)  There is some sporadic continuation in the interim period

(b)  The worst delay were 3 instances of approximately 7 minutes (i.e. 420 seconds) between timestamps.

I’m taking the above into consideration in my exploration of the data, so it would be really great if someone who knows more about this data than me could let me know if I have misinterpreted?

My particular interest is the ‘Q>>NIL_CLWU_RGLC’ constraint equation through the afternoon – however it’s occurred to me that there are other questions I am curious about as well:

‘AEMO intends to further investigate and report on:

• The cause of the SCADA failure and the immediate actions taken to resolve the issue.

• Any further changes that may be required to prevent software bugs impacting AEMO’s SCADA systems.

• The provision of information to the market.

• The application of procedures associated with market suspension.

AEMO will include any additional findings in its final report on this event.’

…  so, in a way, I guess I am now in a race with the AEMO to see how much we can explore, on our own first.

(C1)  Why do we conduct these investigations?

More seriously, though, it might be worthwhile reiterating that we are happy to invest a non-trivial amount of time into investigations like these because (apart from just satisfying our burning natural curiosity) they help to identify how we can serve out clients better in future.

We’ve found that (time permitting) it’s definitely better to be buried in the data ourselves, rather than just reading someone else’s report.  More specific details are here.

Let us know if you can help us identify others who can work with us (internally, or externally) to help us do this better in the future?