Is it just me, or are others also conscious of the increasing number of statistics quoted on the basis of ‘[Statistic] is [Comparator] in a hundred years!’.

One such headline this morning jumped out when scanning various news sites over breakfast: 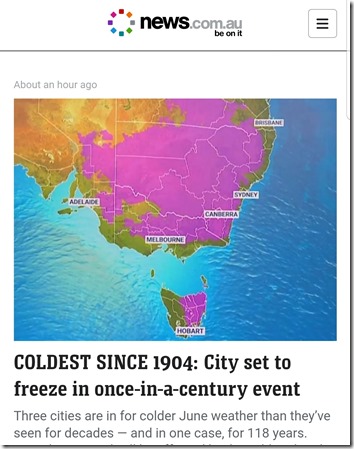 The article ‘Cold outbreak brings temperatures not seen in decades to major cities’ certainly was aligned with the number of conversations about how cold it’s been in different parts of the NEM, and considerations of how that’s feeding into electricity (and gas!) demand during this ‘2022 Energy Crisis’.

In particular, the author writes:

‘Widespread severe frost is expected to hit large parts of the nation from early next week — with temperatures reaching below 5C for much of the south-east.

Temperatures in Brisbane are forecast to drop to just 6C on Friday. The city has not seen a week so cold this time of year since 1904, according to Weatherzone.

Melbourne is looking at its coldest week this early in the season since 1982 and Sydney since 1989.’

Given we’d already seen NEM-wide ‘Market Demand’ peak (and peek, pardon the pun) over 32,000MW on Tuesday 7th June – which is the highest June demand seen in more than a decade, I wondered what was forecast for the rest of the week.  Thankfully, I could just open up the pre-prepared Dashboard style view that we made openly accessible here for a look: 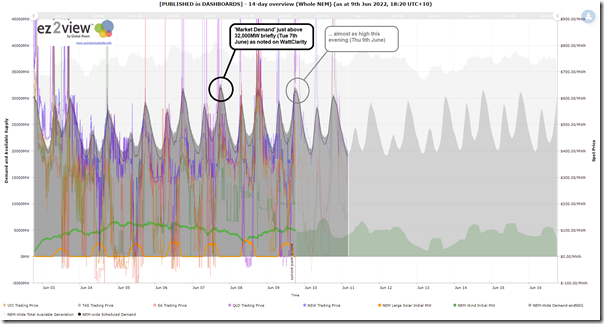 This trend was created with ‘Trends Engine’ accessible in ez2view online  to clients who have a licence (these clients can create, save and share their own live updating trends).

As highlighted on the image, ‘Market Demand’ this evening is high, but not as high as Tuesday … and we can see that the current forecast into next week is that it won’t be as high.

Of course this is a NEM-wide view and does not reveal if the cold weather around Brisbane will drive Queensland ‘Market Demand’ to any particular milestone.  Might have a look later…

Thankfully I did not have to look myself, as the AEMO tweeted on Friday evening here that QLD experienced a new winter record for ‘Operational Demand’ yesterday evening 9th June 2022: 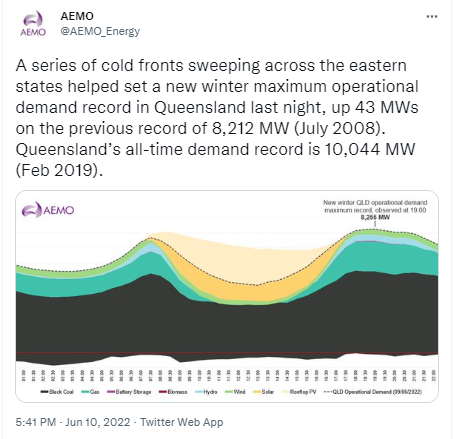 What effect has Stage 4 Lockdown in Victoria had on electricity consumption in the NEM?

In this 5th article in a series, we look at the impact on electricity consumption of Stage 4 Lockdown associated ‘State of Disaster’ in Victoria

Be the first to comment on "Brisbane’s week is ‘Coldest in 118 years’ … what is the outlook for electricity demand?"