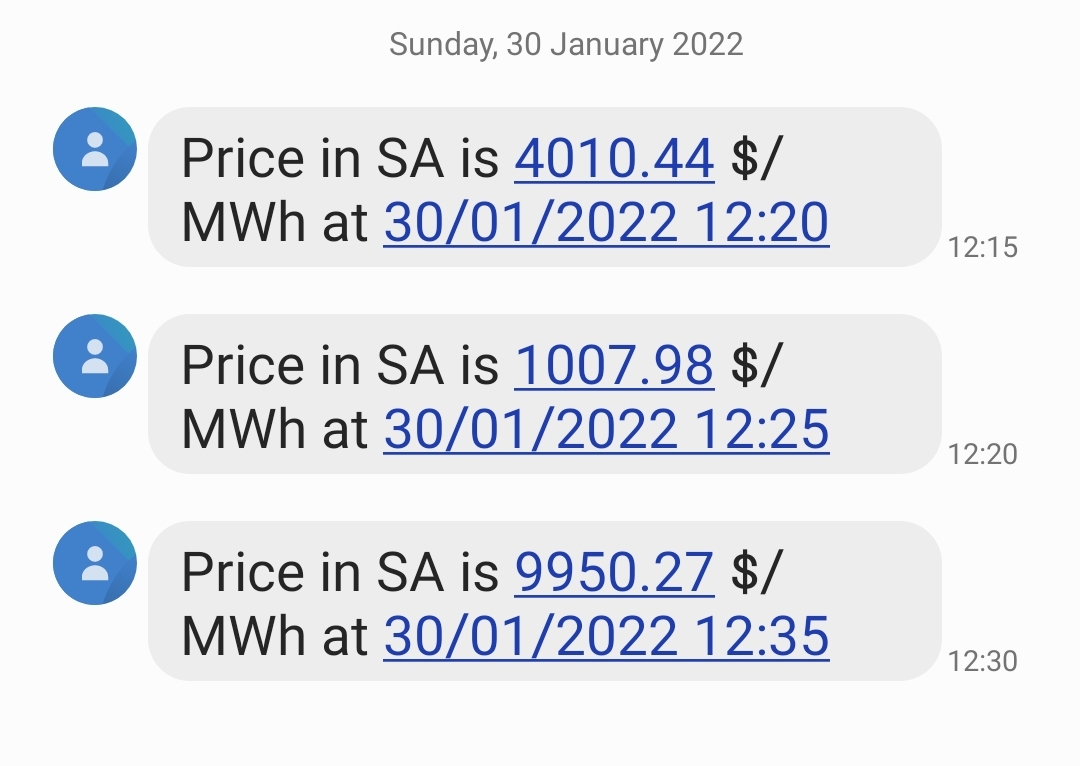 … so I thought I would take a quick look…

Our NEMwatch entry-level dashboard is over 20 years old, and continues to be used by a range of market stakeholders (many wholesale market participants and others have since upgraded to ez2view).  It’s still quite useful for gaining a high-level overview to what’s happening in the market… 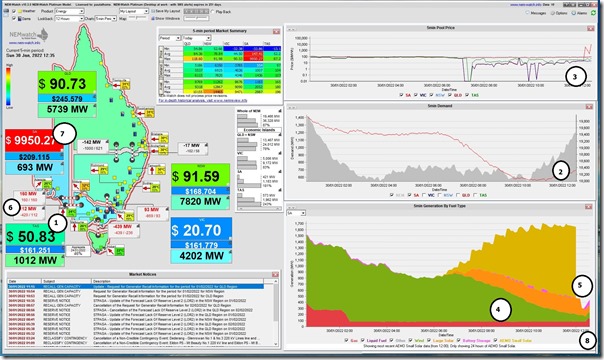 With respect to the numbering in the image, here’s a few quick pointers:

1)  The temperature in Adelaide today is pretty modest today

2)  As a result of which the Underlying Demand will be quite low … which (combined with the large share of Rooftop PV) means Market Demand in the South Australian region is quite modest.

3)  As a result of these factors, for most of the day the SA price has been quite subdued, along with that in VIC and TAS:

(In RenewEconomy on Friday, following the release of AEMO’s QED for Q4 2021 Giles wrote about the ‘north-south divide’ that has been opened up … and example of which we had been seeing for much of the day)

(I’ve not looked to see if constraints have been a factor … but the prices seem not low enough to have triggered economic curtailment).

5)  In the ‘Generation by Fuel Type’ chart we can clearly see the sudden drop in contribution from Large Solar in South Australia just prior to the price spike.

6)  Constrained flows between SA and VIC mean that an ‘Economic Island’ could form just with South Australia, and pricing could separate.

8)  In the Fuel Mix trend chart we see gas-fired generation ramp off its low point, and also some production from battery facilities.

Still fresh from our release of GenInsights21 on 15th December 2021 (and particularly with respect to Parts 3, 4 & 5 – and also Appendices 15 and 16) these broader market conditions are not a real surprise to me…. though the reason for the sudden drop in Large Solar output in South Australia are of interest.

(B)  Delving further, with ez2view…

With our ez2view software, we are able to delve into the detail, and I’ll just include this snapshot of the 12:20 dispatch interval highlighting what appears to be sudden trip of both BNGSF1 and BNGSF2 for reasons that are not apparent currently: 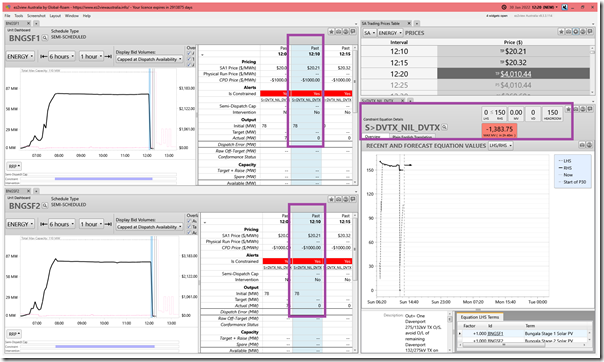 We see the ‘S>DVTX_NIL_DVTX’ constraint equation*  had been bound, limiting the output of both units to a maximum of 150MW … but this constraint would not seem to be the reason why these units appeared to trip to 0MW somewhere between 12:05 and 12:10 NEM time.

* This constraint equation has been invoked in the ‘S-DVTX’ constraint set because of an outage at one Davenport 275/132kV transformer that ran yesterday, and is running today (daylight hours).

Perhaps there is some physical problem onsite … or in the local network?

Several conversations this week prompted me to update the long-term view of how spot prices have trended over time (in particular because average prices in 2020 were quite different than recent years).