The Price Shock experienced by the wholesale electricity market over the May to July period in QLD and NSW has been the biggest shock to the spot market in history, and the forward price movements are rivalling the record setting year of 2007. Meanwhile, the wholesale gas market has independently experienced a Price Shock in recent months with July setting a monthly record and ACCC netback forward prices fast approaching $20/GJ. We’ll look at the electricity and gas markets separately, beginning with electricity …

This article is an extract from our Monthly Report, which is available to subscribers with subscription plans found here.

The month of May began with the threat of extreme prices helped along by cold weather driving demand, calm winds, and as the month progressed evening peak prices began to bite. On May 25, the Callide C catastrophic event occurred causing a tidal wave on the day followed by many after-shocks:

The graphic below shows the story of the impacted generation.

All of these factors have contributed to the biggest Price Shock to QLD and NSW spot prices over the 3-month period commencing 1 May in history. 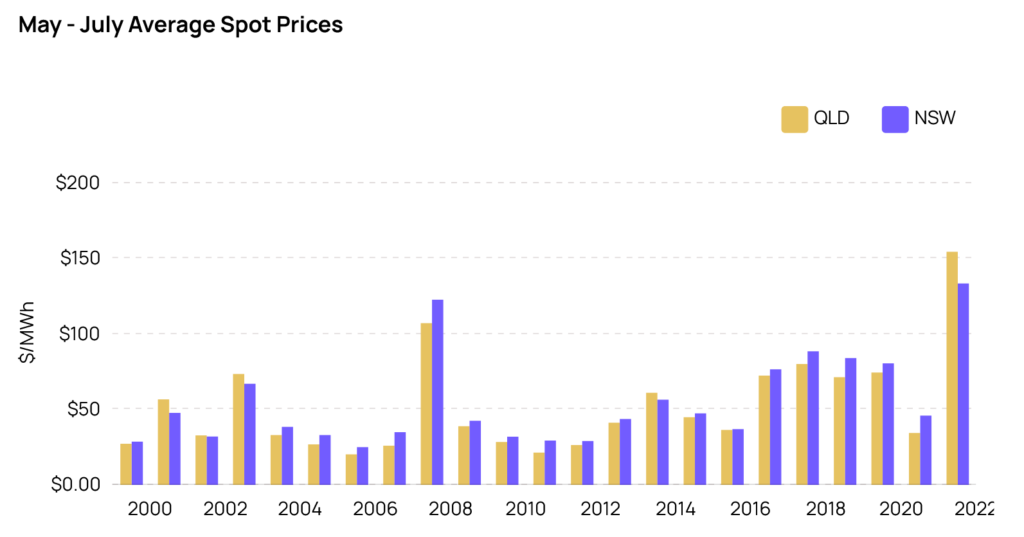 Looking at the shock to forward prices, 2007 had the largest shock in history when the coincident drought on the east coast of Australia struck leading to: 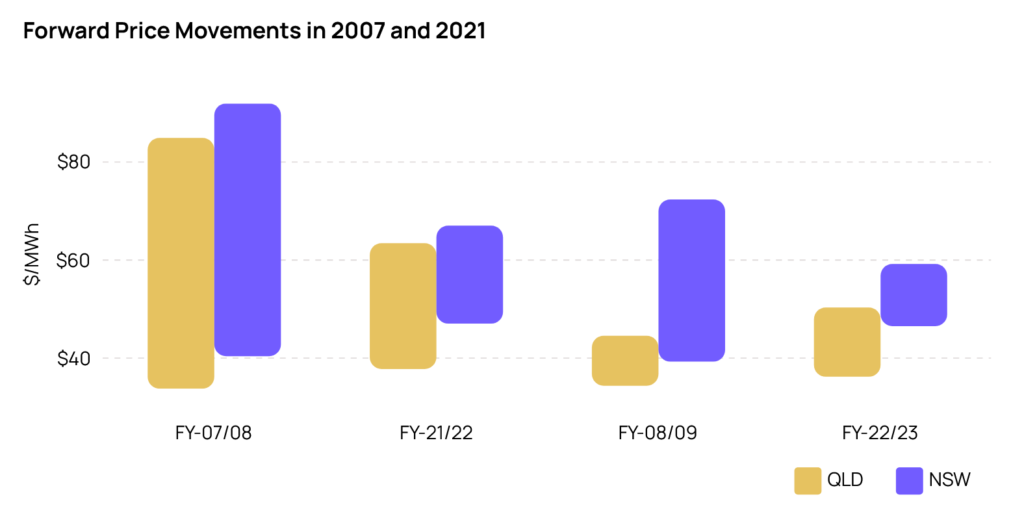 The Price Shock in the gas market has led to wholesale spot prices climbing from the beginning of the year, gathering momentum in Jun-21 when the monthly time weighted average prices passed $10/GJ, followed by about $15/GJ in July.

Domestic gas prices have been continually rising since April in the east coast of Australia, as has the ACCC Netback prices which is based on Asian gas prices and the Japan Korean Marker (JKM) as shown below.

By using the legend, you can focus on a single hub if you wish. 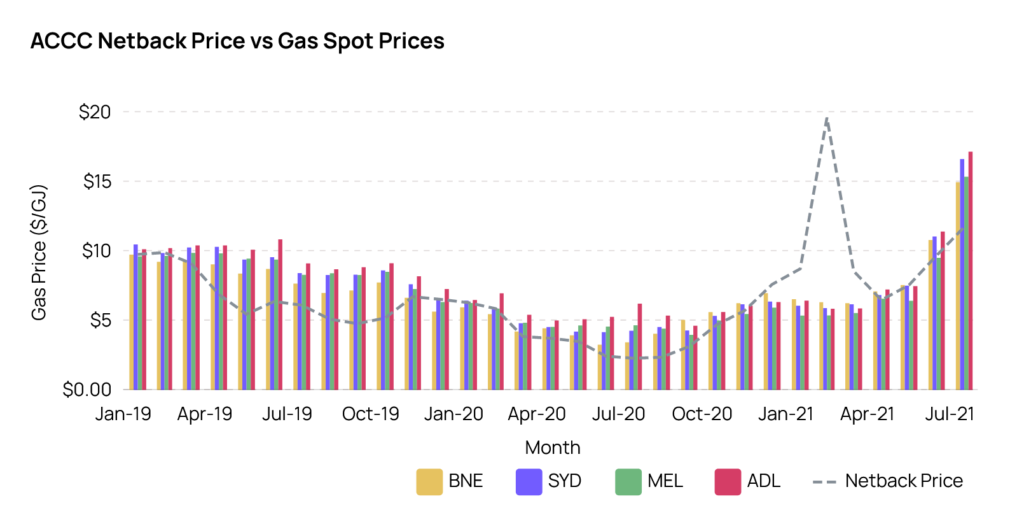 During July, intraday gas hub prices surged to record levels with prices in the Victorian Declared Wholesale Gas Market (DWGM) almost hitting $60/GJ on Friday 9 July for 4 hours. The run-in gas prices was attributed to number of factors including: an outage at Victoria’s Longford gas plant, rapidly diminishing reserve gas and high domestic demand due to the cold weather. 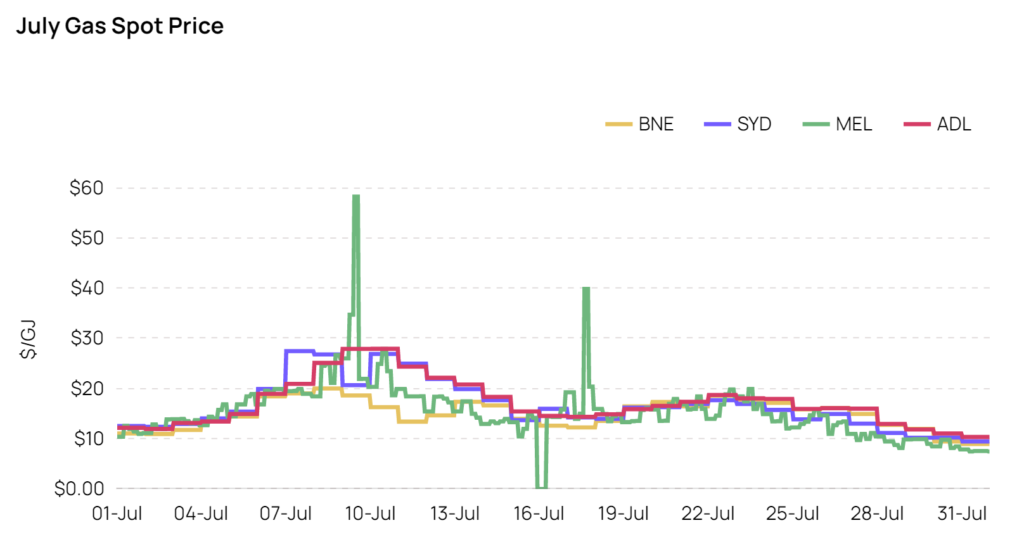 The month of July had the highest monthly time weighted average in history, with the hubs ranging between ADL at $17.16/GJ and BNE at $14.96/GJ: 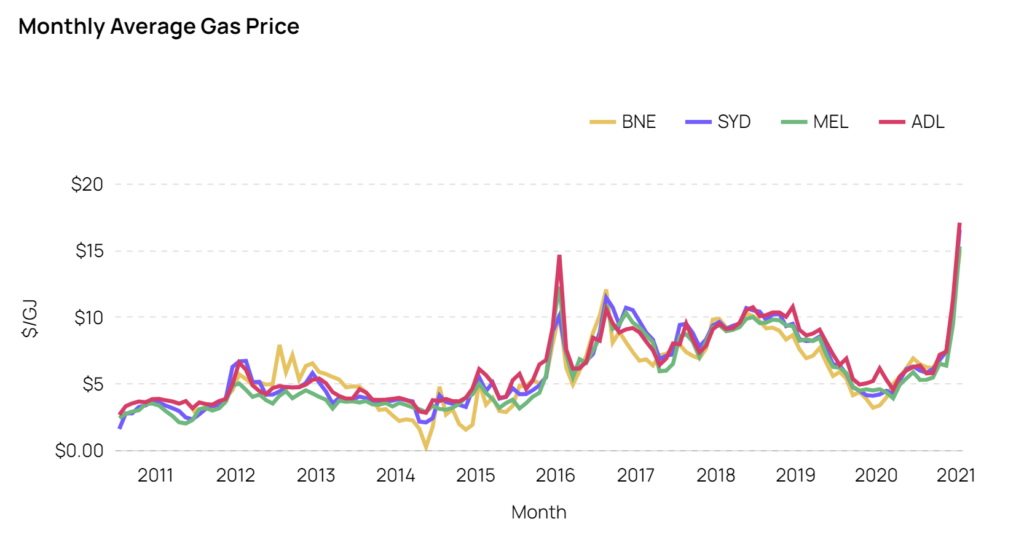 The LNG forward market is trending upwards particularly across the northern hemisphere summer, as can be seen in the recent end-of-month outlooks shown below. 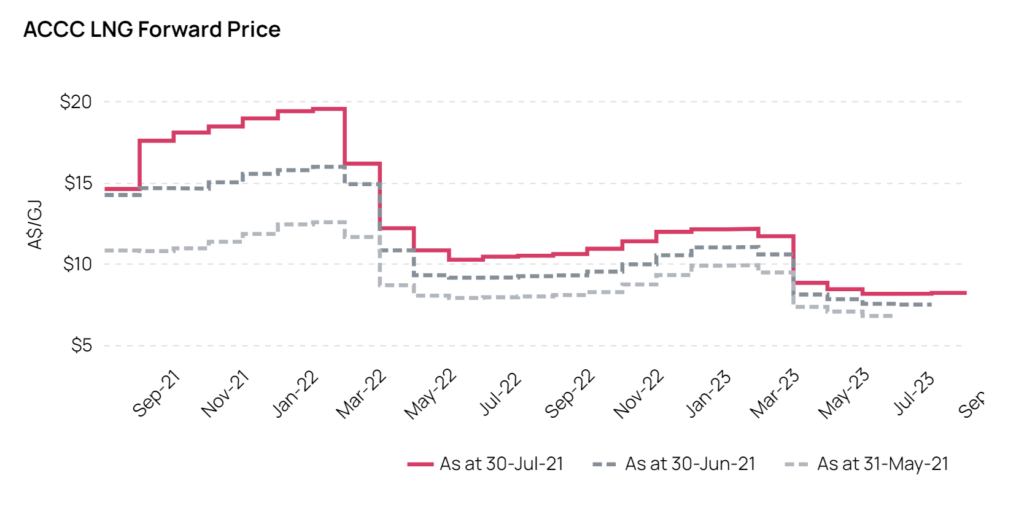 Furthermore, the ACCC has announced that a supply shortfall in the Australian east coast gas market is becoming increasingly likely. The ACCC report showed that east coast supply in 2022 will be very tight, with a shortfall expected in the southern states of about 2PJs. It was noted: