A couple of our readers pointed out that some stressful events occurred over the ditch in the New Zealand electricity industry yesterday afternoon and evening (i.e. Monday 9th August) – and might happen again this evening (Tue 10th Aug 2021) – so I have taken a quick look…

Caveat – readers need to keep in mind that I’m an outsider looking into the New Zealand market and grid, so there will (no doubt) be many things I don’t understand.

Given we’ve previously posted occasionally about other international events, and because there may well be parallels with this event in New Zealand and similar stresses in the NEM, I thought it worth posting this short article today.

(A1)  Information from Transpower – about two events?

Transpower is the transmission service provider for the whole of New Zealand.

From the Transpower website, there are a couple useful bits of information I could quickly find – it seems that there might have been two separate events, potentially only partially related:

Today (Tuesday 10th August 2021) there is this ‘Statement on 9 August power outages’ on the website – which is copied here for ease of reference:

Transpower thanks everyone for their patience in dealing with power outages that affected some consumers across the North Island yesterday evening.

The outages occurred as record demand coincided with insufficient generation which resulted in the need to reduce demand to maintain system security.

General Manager Operations Dr Stephen Jay said: “We apologise to everyone who was affected last night. It is fair to expect electricity to be there for people when they need it most, especially on one of the coldest nights of the winter.

“Last night, demand over the evening period reached record levels of around 7,100 MW between 6 pm and 6:30 pm.

“Unfortunately, there was not enough generation to meet demand. As a result, Transpower had to ask all the local lines companies and large industrial users to reduce demand to help keep the system in balance. Beyond temporarily cutting power to hot water cylinders, some customers were disconnected.

Together with the sector, we will work to understand why there was not enough last night, to avoid a repeat.”

Under normal circumstances there is typically more generation available in the system so that it can cope with high demand as well as the potential for other faults.

“With the widespread cold weather, we had been looking ahead to the evening peak throughout the day;” explained Dr Jay. “We expected things to be tight due to some major generating units being unavailable and signalled to the market that other generation was required, and that demand should be voluntarily reduced where possible.

“Unfortunately, this is what came to pass. The prompt action of local lines companies and others in reducing demand helped keep the system in balance and prevented even wider problems.

“Problems such as last nights are very rare indeed and we will now be working with the sector to do all we can to avoid a repeat.”

The website has this ‘Power System Live Data’ page, from which I have grabbed this snapshot today: 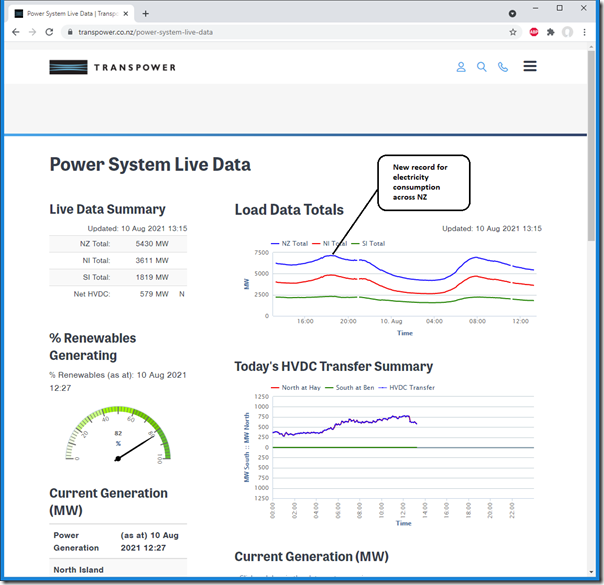 I wonder if there were not two discrete events yesterday evening … somewhat related?

Event 1 – unserved energy due to high demand and insufficient supplies?

Corresponding with this time, it seems that there was an amount of unserved energy around that time due to insufficient supplies.

However there also appears to be a drop in the demand curve a little earlier that evening – and that this occurred only on the North Island: 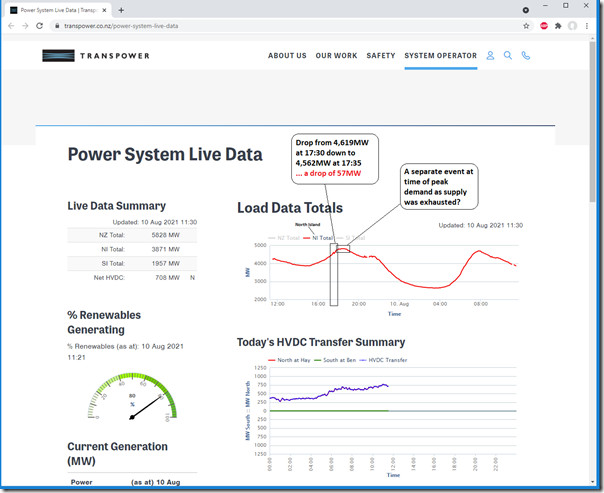 As noted on the image, the drop in demand from 17:30 to 17:35 was 57MW – I’m not sure if this was as a result of load shedding activity directed by Transpower, or whether this was the result of some power lines being down in the windy conditions?

I did see this article from Matt Burrows a week ago on Monday 2nd August warning ‘NZ weather: Auckland, Northland warned of power outages, falling branches as 100km/h winds loom’ via NewsHub … but that warning did not seem to stretch out a week ahead?

In the NEM, the AEMO uses Low Reserve Condition warnings – with three levels of alert (LOR1, LOR2 and LOR3).  In New Zealand, it seems there are ‘Low Residual Situation’ warnings – and that there was one issued at 06:42 on Monday morning: 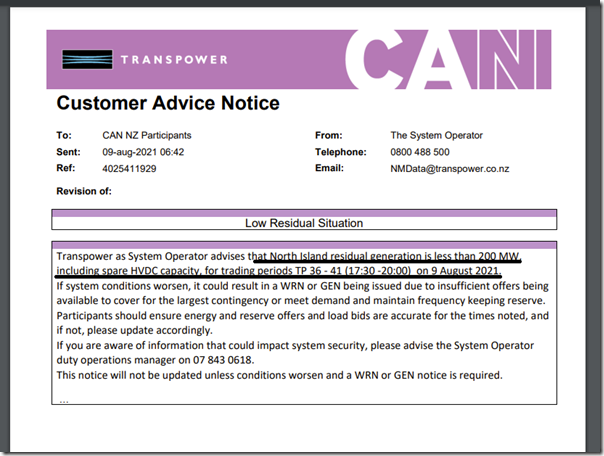 (A2)  Coverage in the Media, and Elsewhere

A quick walk-through what I have seen elsewhere (thus far):

In NZ Herald, at 02:51 there was ‘Power failures hit swathes of North Island as winds topple lines and cold weather triggers surge’ – and then at 05:42 there was the ‘Widespread power outage in the middle of winter – thousands affected’ article.  This article mentions two possible causes:

Cause #1)  Shortage of supply

‘Electricity authorities announced that demand for power had reached “an all-time high”, and they did not have enough generation in the system to maintain that demand.

Cause #2)  Power lines down

Up to 20,000 households were plunged into darkness and, in some cases, left without heating after high winds brought down power lines and cold weather saw power use surge beyond generation capacity.

On NewsHub, there was an article ‘Rolling power outages across North Island as electricity demand reaches ‘all-time high’ by Hannah Kronast.

The national grid operator Transpower declared a “grid emergency” at 7pm and asked local distribution companies to reduce load on their networks, a spokeswoman for the organisation, Deborah Gray, said.

It was the first time in 10 years that such an emergency had happened.

It even made an article in Bloomberg, with Tracy Withers noting ‘Sudden New Zealand Power Outage Raises Supply Security Concerns’.  I notice there is this paragraph within:

Prime Minister Jacinda Ardern wants New Zealand to be generating all of its electricity from renewable sources such as hydro, wind or geothermal steam by 2030. Critics have warned that removing coal or gas-powered plants from the system could expose supply to greater risk of disruption.

Sounds very similar to concerns raised by some in the NEM!

Amongst the other coverage on social media, I have seen comment various people – with  the comment, and data shared by Mark Byron Todoroff at TESLA Asia Pacific (no relation to the car and battery company) worth reading.  Two key sentences there:

Although it was a cold day, it was nothing inconceivable. In fact, we’ve seen colder days in just the last 10 years.

The fact is that New Zealand’s power demand has been growing over the last 10 years.

Also noted were comments by  Antony Stace at SwissRE and others

PS – on Wednesday 11th August 2021, Geoff Swier posted these comments here on LinkedIn that some readers will find of interest.

PS – on Sunday 15th August 2021, Greg Williams (an economist at AEMC) posted these comments here on LinkedIn that some readers will find of interest.

In the searching, I also found this Customer Advice Notice (ref 4028274213) published this morning: 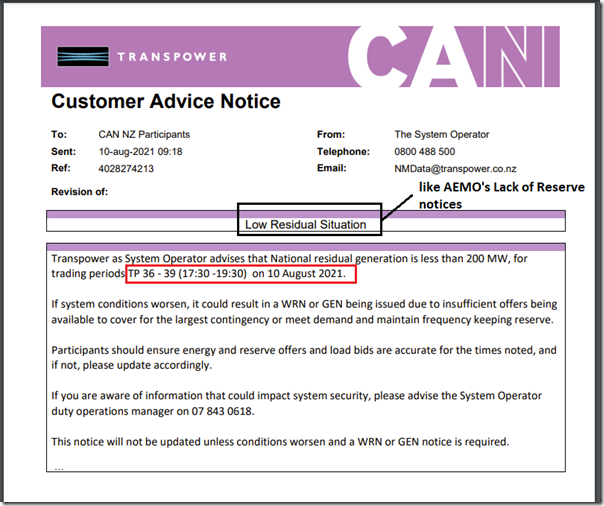 There was also this one published at 22:25 yesterday looking forward to Tuesday evening.

No time to explore further now, but there are obvious questions about the level of installed capacity in the New Zealand market (both now, and in relation to the mooted closure of coal and gas plant) – and also questions about how much of this plant was available yesterday evening?  For instance, I’m aware that the drought conditions in the western USA have led to the dire situation where some hydro storages may be unable to generate as much as required (or at least as desired) through the remains of summer 2021.

Are there also hydro shortfalls affecting the situation in New Zealand?  I don’t know, but it’s an obvious question…

The IRPM has dropped again this evening, with drops in Available Generation outpacing drops in Demand.

AEMO’s updated forecast for load shedding this evening is up to 1,454MW (i.e. about the size of Brisbane)

AEMO’s updated forecast for load shedding in QLD this evening is for an enormous amount (1,454MW)

AEMO releases its Electricity Statement of Opportunities today, with an initial flurry of press coverage. Another reminder of heightened risk that the NEM is increasingly facing…

Morning volatility in QLD and NSW on Thursday 22nd July 2021

A quick record of some morning volatility in QLD and NSW … both due to tight supply/demand balance with interconnectors constrained.