Disclaimer: this is my personal opinion based on observations and analysis and does not represent my employer in any way.

I’ve been reading the ESB Post 2025 submissions and most feature support for Renewable Energy Zone (REZ) development, but there’s not much clarity on who should pay for it and how to design it. In fact, there’s no real definition of what a REZ is!

Ultimately there’s a disconnect between “more transmission” which is what we need and “doing a REZ”. There’s a lot of focus from everyone on theoretical scenarios in which bad investments happen, rather than focus on how to maximise benefits in the design phase. For example, the ESB are thinking about how they can stifle generators outside a REZ, even though those generators may be better projects than ones in the REZ. This comes from developers saying they don’t want to have their REZ entitlements eroded by generators connecting elsewhere.

Let’s start with the concept of a REZ – what is a REZ anyway?

What do we actually want in a high renewables grid?

One way to conceptualise a REZ is as a radial line encompassing the functions of a baseload generator. There’s wind, solar and storage within a neat package, outputting familiar functions as the current coal fleet does.

This is not an efficient or least cost solution, although easier to conceptualise. Radial lines are less reliable and provide fewer flow paths for generation. This also means a larger amount of congestion or storage is required to improve utilisation of the line, either of which results in higher cost energy.

Instead of conceptualising REZs let’s consider existing successful generation zones. They have an energy resource, thoroughfare to/between loads, and general open access for generation. An extension of the shared network, not a distinct feature. Existing generation zones have 3 or more strong, redundant, and often geographical spread lines to carry flows to load centres.

We have a long, stringy grid with weak points that could be improved for security/reliability and also to increase access to renewable resources. This augmentation is necessary given coal generators are coming to the ends of their lives, and understandably consumer groups want to know that new assets will be well utilised.

Germany and Denmark are building a clever example: they built a link connecting their countries to three offshore wind farms in the Baltic Sea allowing maximum utilisation of the line. At high wind energy is exported to both regions, at moderate wind it is exported to the higher priced region, at zero wind the line acts as an interconnector between regions.

For our high renewables future, what are the ideal characteristics for the network augmentations?

Where are the opportunities? 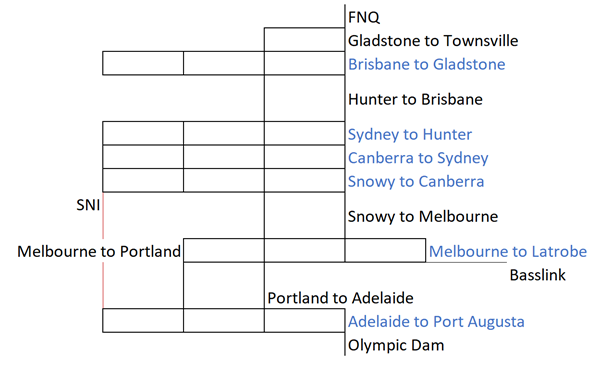 This is a stylised Excel depiction of the highest voltage lines the NEM. If you imagine it like a rope ladder you can see there are some redundant rungs where a breakage doesn’t result in falling off. But there are quite a few routes where a single rope fraying could topple you.

In blue are the strong generation zones:

QLD has a large one with multiple strong lines to which all the coal is connected – slowly being joined by solar and wind.

NSW has coal north of Sydney, wind near Canberra, and hydro at Snowy. Strong redundant lines the whole way between them.

VIC has a great connection from Latrobe Valley to Melbourne but it’s merely decent in the west.

SA has successfully converted the strong, redundant lines that once transmitted coal to now carry wind and solar.

What could we build out to make the NEM stronger while also gaining new supply?

The SA-NSW Interconnector (SNI) is going ahead and provides an interesting new loop. In terms of connections it ticks the box, but the wind resource isn’t so diverse so let’s give it 2.5 out of 3 from the characteristics above.

VNI west is coming up next, strengthening Melbourne-Snowy. It provides necessary redundancy for the overworked interconnector and is safely away from bushfires. It can help Snowy get peaking capacity into VIC and opens up existing wind zones (no diversity). Overall, it’s still really strategic, but we should stick to 2.5 stars.

QNI Major comes later, but it another great option because it conveniently encompasses the New England REZ planned by NSW, as long as the path is through the windy tablelands. This one gets the full 3 stars because the wind unlocked in northern NSW/southern QLD is quite distinct compared to other options. If NSW want 8 GW up here, they should probably also run a third interconnector to carry all that flow.

Basslink2 likewise gets 3 stars because TAS wind is substantially different to other regions. Ideally it wouldn’t connect to Loy Yang to provide some more security, otherwise we should downgrade it to 2 stars.

Not on the cards at the moment, but a second VIC-SA interconnector could be built as an extension of the Ballarat-Bulgana upgrade. This would complete a second Melbourne to Adelaide route and would hopefully capture a slightly different wind regime between the large VIC and SA wind regions. If it just results in more wind in existing areas, it only gets 2.5 stars. 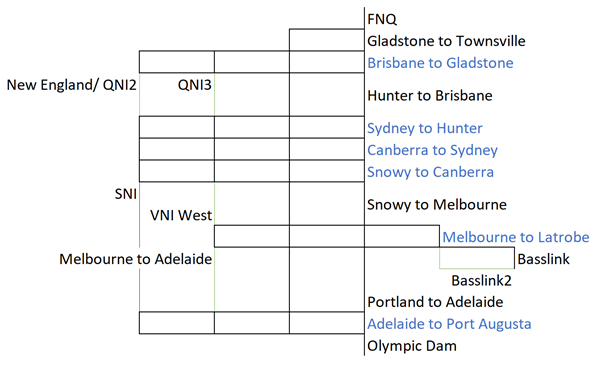 With all our upgrades we’ve got a much stronger rope ladder. We’ve got more opportunities to connect generators, and more opportunities to share generation between regions – reducing curtailment of renewables and reducing peaking capacity requirements. Large generator trips are no longer catastrophic as we have redundant lines and generators in other areas.

Who plays and who pays?

We need a federal package to help rollout this infrastructure because nobody wants to handle the risk. Really this is the only successful way we’ve done nation building infrastructure projects before. All the historical generation zones relied on government funding to build out several redundant lines at once. The model used in the past has been to build it and socialise the costs later once the benefits are established. The states can’t do it alone, and most of the value of new transmission is diffused across the entire NEM not just in local pockets.

TransGrid raised some interesting points in their P2025 submission, mentioning that “the wider economic benefits [on top of RIT-T] … could inform contributions from taxpayers for the ISP projects.”

They go on to mention the short horizon in the RIT-T for measuring benefits compared to asset life and the disparity in discount rate for consumers, and a social discount rate governments would normally consider for infrastructure. In this regard, the federal government could realise the long term benefits of transmission by underwriting the difference in NPV of a 3% discount rate over 50 years vs. a 6% discount rate over 25 years. This could reduce initial consumer payments by almost 50%.

I’d like to add to this that the federal government is a major beneficiary of nation building infrastructure like this because two thirds of electricity consumption is by businesses, and any savings businesses get translate into higher corporate taxes.

Having federal funding assistance avoids a major issue unfolding which is that consumer groups don’t want to pay for transmission*. Even though the benefits of increased supply competition swamp the costs of transmission, consumers (and states) don’t want to risk that new transmission is a white elephant.

To that end governments and regulatory bodies are trying to put some of the cost on generators (even though it’s more costly to consumers this way). The generators in turn are asking for rights to that transmission because they don’t want freeloaders given use of the transmission they helped fund.

This in turn is encouraging the ESB to progress the latest incarnation of COGATI, with a new addition to prevent anyone connecting who isn’t “part of the plan”. The ESB proposes that existing generators get a form of grandfathering on access and are no worse off, new generators in a REZ get some kind of rights and are better off, and new generators outside a REZ get no rights – and the basis risk of LMP. This means a new generator outside a REZ is significantly more difficult to finance as you cannot guarantee you can meet a contract with a customer and you could often be paid nothing for electricity that was happily used by consumers.

This is a terrible waste as many good projects would not proceed and it reduces the options for new supply. This inevitably ends in higher costs to consumers, encourages rent seeking from the lucky oligopoly generators, and means higher emissions as the gaps are filled with gas.

In fact, the proposal means that as existing development projects will be riskier once the new rule comes in and we may face a supply crunch where developments in prescribed REZs don’t exist, but other good projects are struggling to gain finance.

If we want to progress to a strong, effective mesh network it will be really tough to determine who’s rating belongs where. Any redundant loop will open up capacity on parallel and adjacent lines, making it difficult to determine the border of a REZ.

There is a risk of course, that someone builds an asset that produces an outsized growth in congestion and harms otherwise efficient investments. If we want a mechanism to block the most inefficient generators then let’s do that directly, instead of blocking anything not chosen as a winner by central planners or governments.

This means providing existing or committed generators with a weak entitlement that congestion will not be allowed to grow excessively. To be clear, consumers always benefit from new supply even if it is inefficient, but in the long run a more stable investment environment with a greater pool of supply is a stronger lever on prices.

The benefit of open access is that it can allow the optimum mix of generation to evolve over time. The more rights we give generators, the less fully we can utilise the transmission network, and the more supply is inhibited, both of which hurt consumers. Protecting consumers from short term mismatches between the cost and value of transmission is not best handled by generators with higher cost of capital, but governments who can absorb this risk against the long term benefits of an efficient, effective, and open platform for trade.

*The current NEM transmission network is worth about $20b. A major overhaul of $10b** would massively improve the network. That’s a 50% increase in the regulated asset base which would increase the cost per kWh by 1 cent all things being equal.

However, if we start electrifying industry, vehicles, and heating the increase in electricity demand will also reduce the per-unit cost of transmission. In AEMO’s Step Change scenario, EVs alone would provide an 11% increase in demand by 2030.

** fun comparison – Australia spends $30b each year on superannuation fees. 1.5 times the total replacement cost of transmission. Yet we fret about spending anything on critical infrastructure.

How To Reduce Electricity Costs – Part 4

In Michael’s fourth article of the series, he looks at the power of analysing electricity usage data to understand where and when users consume electricity so that they can identify cost saving opportunities.

We are on track to meet the STC target so why hasn’t the Clearing House worked?

Some observations about where the market for STCs seems headed, following my presentation at All Energy earlier in October.